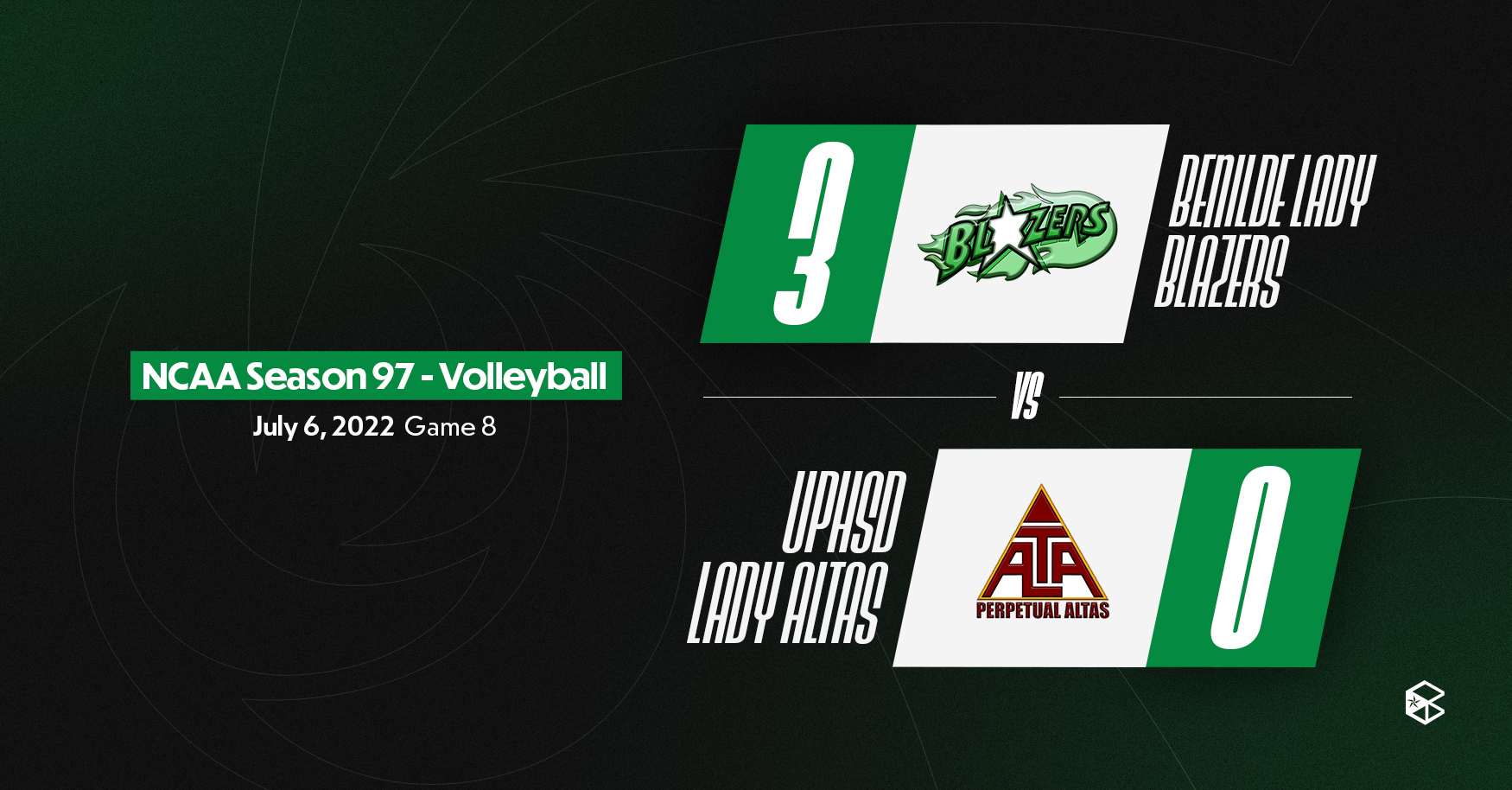 After another triumph, the Lady Blazers are now a win away from sweeping the elimination round and triggering the stepladder semifinals format.

The De La Salle-College of Saint Benilde (DLS-CSB) Lady Blazers outplayed the University of Perpetual Help System DALTA (UPHSD) Lady Altas, 25-14, 25-12, 25-18, on Wednesday, June 7, at at the Paco Arena Events and Sports Center, Manila. The Taft team is now one win away from an elimination-round sweep and an outright finals berth.

Far from their usual set, the Lady Blazers struggled to establish their gameplay in the first frame–an opportunity for the enthusiastic Lady Altas to grab an early upper hand, 6-5. Despite the errors, Benilde was able to sharpen their attacks to keep the game close, 9-9, until star setter Cloanne Mondoñedo quarterbacked the strong offense of team captain Micah Go to completely break free from the slim margin and ushered the green and white squad to a 6-0 run. Benilde then managed to sustain its resurgence and closed the first set with 25-14.

Like a well-oiled machine, the Blazers continued their winning ways and banked on their quick attacks to further maul the already frail defense of the Lady Altas. Go and Cristy Ondangan fueled the Lady Blazers in unleashing a 10-to-nothing run to take a commanding 15-5 lead. UPHSD team captain Charina Scott tried to resuscitate the flatlining Lady Altas after sneaking a swift spike followed by three consecutive errors from Benilde, 20-12, but the Taft squad quickly revived their well-timed blocks and controlled spikes as they raced to close the second set, 25-12.

The Lady Altas opened the third set with better blocks that shut down the offense of the Lady Blazers, 4-5, but the Taft squad quickly kept UPHSD at bay with a stronger floor coverage. Jade Gentapa shrugged off an early 5-6 deficit and pounded on the maroon squad’s defense with her blunting attacks and prompt drop ball that ignited a 6-0 run.

The gap eventually became more challenging for UPHSD to shift the momentum when the Lady Blazers were only a point away from closing the match. However, the Lady Altas managed to halt DLS-CSB’s victory after scoring two consecutive points, 24-18, but unstoppable Gentapa flaunted her superb offense until the match-point and successfully sent the Lady Blazers to their eighth straight win.

Gentapa, the Player of the Game, unfurled 15 stellar points on 13 kills and two blocks. Ondangan sizzled with 11 while Mondoñedo was credited for 16 excellent sets.

The Benilde Lady Blazers will face the three-time defending champion Arellano University (AU) Lady Chiefs for their last game in the elimination round on Saturday, July 9, at 12 p.m., with a live telecast on GTV, GMA Sports, and NCAA Philippines.