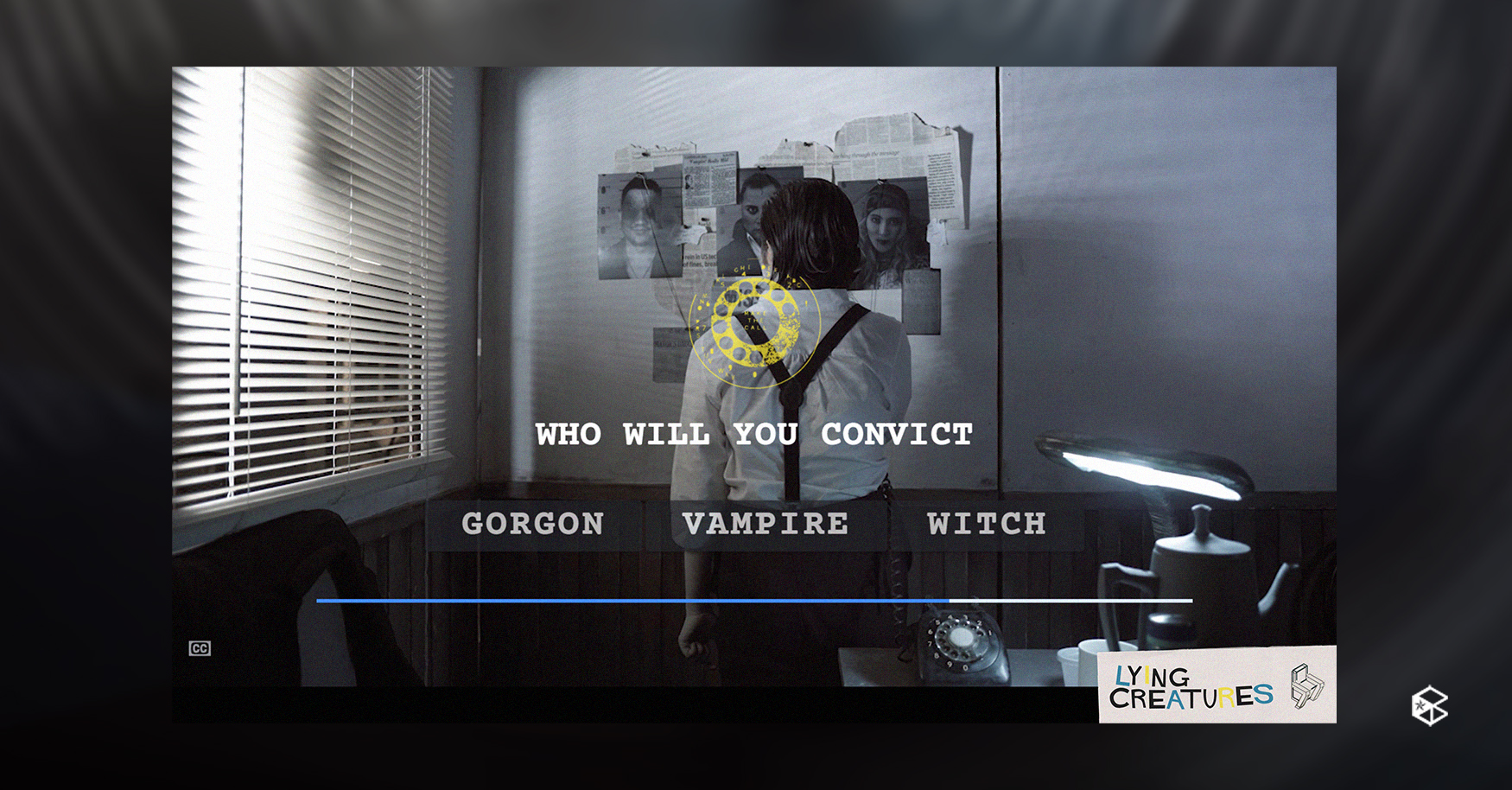 Gorgons, vampires, witches, and a missing girl—let’s get to the bottom of this, shall we, detective?

Premiered last March 25, Lying Creatures redefines how theater can be presented on virtual platforms. Is the truth really just black and white? In this interactive play produced by Benilde’s Teatro 77, your choices dictate how truth is uncovered.

Set in the fictional universe of Lunan City—a place where humans live alongside mythical creatures of every sort—the play centers around The Detective (Sari Labrador) who is on the brink of shelving a missing person case gone cold. The victim? The mayor’s daughter. The three prime suspects are a gorgon with a shady family background, a vampire with a soft spot for poetry, and an activist witch with a perpetual hangover.

All three have given sound alibis—or so they think. The Detective is at her wits’ end, with external pressures to close the case arriving at a breaking point. In one last attempt to unmask the culprit, The Detective must question everything she’s learned thus far, reopen old wounds, and most importantly—trust no one.

Inspired by a film noir setting, Lying Creatures sets the mood with virtual documents styled in a news-report fashion to brief you on what’s going on in Lunan City before the start of the play. It certainly elevates the suspense as the show starts with only sounds to give you an idea of what comes next. Teatro 77 does an excellent job of taking the theater to your screen and in your own home. It doesn’t even feel like a movie—it feels like being part of a psychological unraveling.

Although the plot of Lying Creatures is quite predictable for anyone who’s watched enough suspense stories in their lifetime, its execution was no less than brilliant. The star of this show is really the fresh dynamic of taking theater to the virtual world. Featuring elements of film and choose-your-own-adventure games, this production gives viewers a truly unique theater experience.

Alongside clever production elements such as set and costume design that creates the illusion of film noir, the literal painted-on black-and-white “filter” in the entire show was a brilliant step in preserving the live and uneditable nature of theater production. There were minimal areas that were noticeably in color, but perhaps the producers had done this on purpose to give an idea that this filter is manual. Frankly, had these colored objects not been there, one would have completely believed that the play had been edited with a black-and-white filter—so to look at it from a bigger picture, these colored nuances actually give more credit to how dedicated the entire production was to the traditional characters of theater.

Other than the visuals, one cannot overlook the sound design. By eliminating the experience of seeing the extended cast of characters, the use of compelling voice acting brought the characters to life in the audience’s imagination, and carried Lying Creatures to such great heights for the virtual theater experience.

For a show whose theme is a crime investigation combined with fictional foreign creatures, it was a perfect opportunity to tell the story with more sound than visuals. More so, the limited four-cornered office set ironically made room for the imagination and suspicions of the viewer to come together once paired with compelling voice acting and sound effects. It was a balanced mix of theatrical elements one would expect from a live show. And with the real-time decisions you have to make with The Detective? The suspense feels too real.

Beyond the mystery and suspense within The Detective’s tiny Lunan City office, it's impossible to overlook many of the city’s parallels to modern-day Manila. In the post-show Q&A on opening night, ID 117 Theater Arts student and director Isabella Pedersen said that Lunan City was “an allegory for the Philippines,” and the many poignant issues currently present in both the country and across the world.

Even with resident creatures and their various special abilities, Lunan City is far from a utopia. If anything, the use of magical creatures illustrates an insightful commentary on the inequality found between social classes, and how they are treated by police and the government units who are supposed to be protecting them.

Lying Creatures makes audiences think—about how truth can be warped and misrepresented. It reminds audiences that despite this, truth always finds its way into the light.

For a night filled with suspense, exasperation, and everything in between, catch Lying Creatures before the case closes on these remaining showtimes: