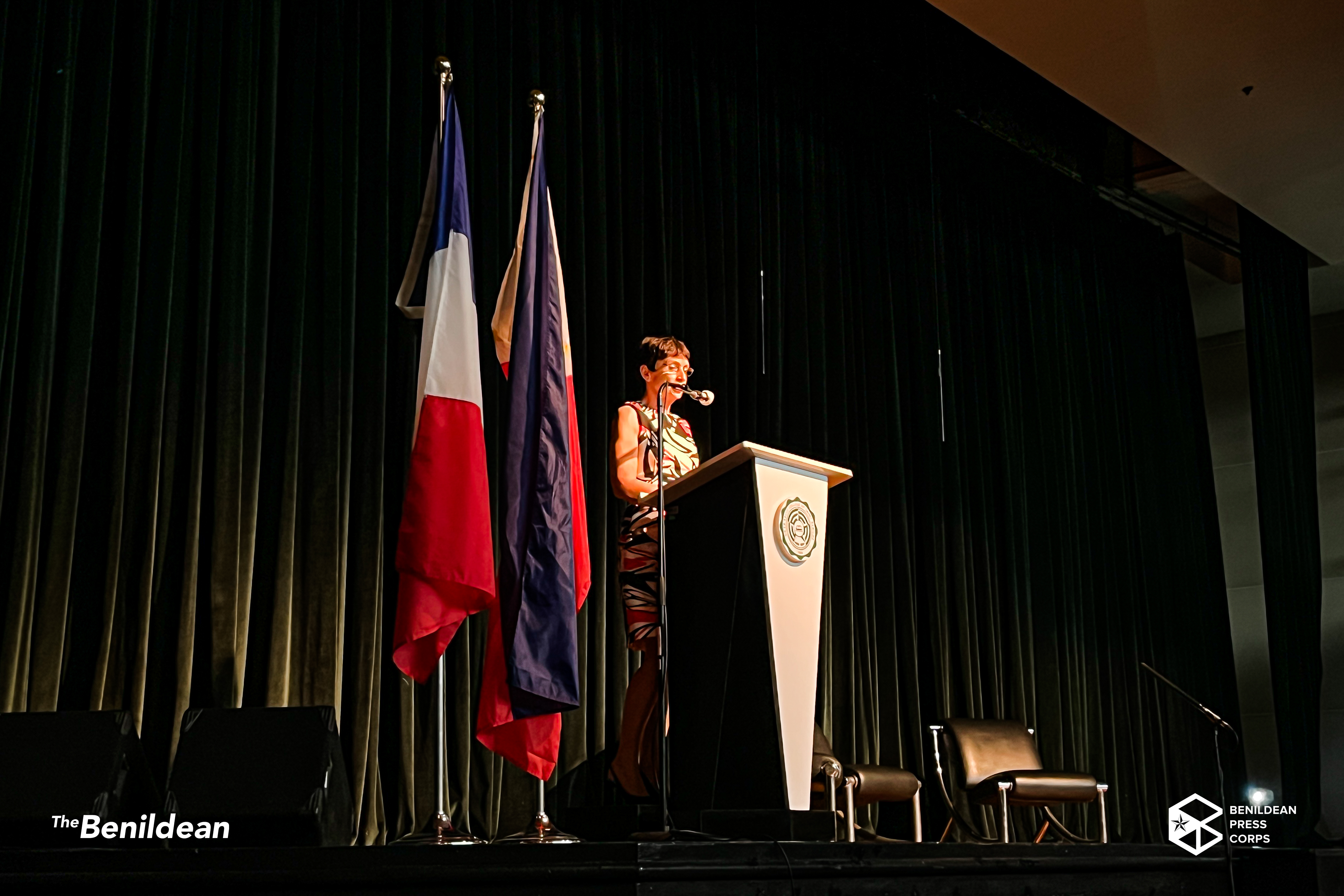 In celebration of the 75 years of the Philippines-France diplomatic relations, Her Excellency Michele Boccoz, the Ambassador of the French Republic to the Republic of the Philippines, visited De La Salle-College of Saint Benilde in a hybrid forum.

In honor of the 75 years of diplomatic relations between France and the Philippines, a hybrid forum titled “FRAncoFil,” was commenced on Oct. 5 in the Augusto-Rosario Gonzalez (ARG) Theater in Benilde Taft Campus. In partnership with the School of Diplomacy and Governance (SDG), the Embassy of France to the Philippines and Micronesia and the Alliance Francaise de Manille visited the College and graced the event together with the faculty members and students.

In the program’s opening, Chancellor Benhur Ong emphasized the importance of the role played by diplomats in “sustaining and nurturing peace and security in the international arena.” He also hoped this 75th celebration would strengthen the Philippines and France's diplomatic and academic relationship, specifically with the College.

The Directors of the Alliance Francaise de Manille graced the celebration with their opening remarks in which they highlighted the plans and opportunities laid out for Benildean students to immerse themselves further in the French language and culture through immersion and internship programs. Benilde, the first academic partner of the Alliance in language training, announced that such opportunities aim to equip students in international governance.

Moreover, the Special Lecturer of SDG and Ret. Ambassador Marilyn J. Alarilla synthesized the history of France and Philippine relations. She iterated that a good relationship with France is vital to our economy, national security, and culture, as France is a significant international player.

Michèle Boccoz, the French ambassador to the Philippines, talked in her address about the significant, long-standing relationship between Filipinos and the French that was only formally established on June 26, 1947. She also discussed how the French have invested, volunteered, contributed to the development, taught French, carried out scientific research, and engaged in tourism in the Philippines.

Her Excellency Boccoz also expressed her thanks for strengthening both nations' connections despite the pandemic and said that the celebration marks this significant occasion.

To close the program, Cristina Ortega, the President of the Alliance Francaise de Manille and Former Ambassador of the Philippines to France, stated that France and the Philippines had a long history of good economic, political, and diplomatic relations. Cultural affairs were also a factor in their cordial ties throughout history.

“Our relationship with France goes a long way. However, we believe that we can still improve, strengthen, and deepen our bilateral relations. France could become a closer ally, partner, and a friend to the Philippines,” she said.

Affirming the importance of France and Philippine relations, she further declared that “France is a major power… It is a leader of the EU, a nuclear power, and a NATO member. It is the world’s fifth largest economy and a significant source of foreign direct investment,” encapsulating the significance of the bilateral relationship in pursuit of sustainability, climate action, and economic development.

Tweets by TheBenildean
Printed from http://localhost:3000 on 27 November 2022