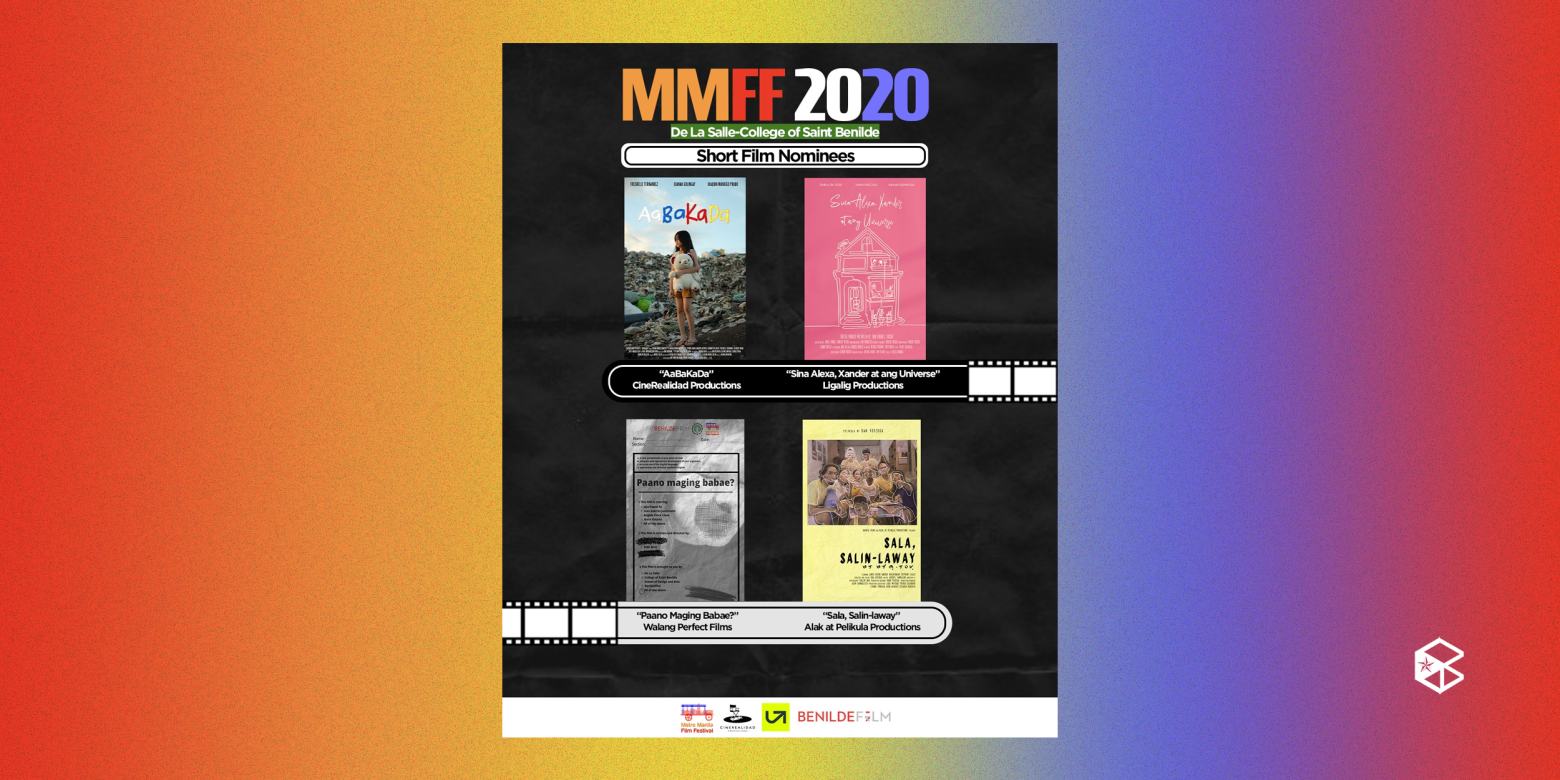 Starting tomorrow, Dec. 25, make sure to catch these four Benildean short films to be screened at Upstream as official entries in the 2020 MMFF.

As part of the annual Christmas celebration of Filipino films, the 46th edition of the Metro Manila Film Festival (MMFF) pushes through digitally amidst the COVID-19 pandemic. For the first time, the film festival entries are to be made available to audiences outside the Philippines throughout its digital run.


After the 2020 Metro Manila Summer Film Festival (MMSFF) was canceled due to the ongoing pandemic, the feature-length films and the student short films in-competition have been moved to the annual Christmas festival.

Among the eight short film finalists, four of which are from 119 Benilde Digital Filmmaking students who got to showcase their talents in the MMFF Student Short Film category.

A powerful film, “AaBaKaDa” shows a couple educating their child about the Filipino language in their own country where their mother tongue is prohibited. Its message speaks against foreigners entering the Philippines, especially the Chinese.

The film by Tyrone James Luanzon is paired with the biographical film Suarez: The Healing Priest and stars John Arcilla (Heneral Luna, Birdshot).

Directed by Gian Arre, the film asks the titular question of how women struggle with speaking up towards social injustices under the awful misogyny.

The film is paired with “Fan Girl” which is directed by Antoinette Jadaone (Never Not Love You, Alone/Together) and stars Paulo Avelino (Goyo: Ang Batang Heneral) and newcomer Charlie Dizon (Four Sisters Before The Wedding).

In a living room, an entire crowd seems to be watching “Miss Universe”—not merely a family, but a barangay.

A film directed by Daniella Verzosa, “Sala, Salin-Laway” showcases the impact of Miss Universe to audiences, especially for families. When asked about the inspiration of the film, Verzosa responded on how it represents Filipino pride—something quite uncommon these days in our films. The film is paired with the comedy film, “Pakboys: Takusa.”

Every year, siblings Alexa and Xander decorate their room into a Miss Universe arena and pretend to be one of the contestants. However, something unexpected happens that leaves their lives astonished.

Directed by Vahn Leinard Pascual, the film showcases the Filipinos’ love and pride for pageantry. It is paired with the Filipino boys’ love (BL) romantic-comedy film “The Boy Foretold by the Stars."

Moreover, as a series of short films, these MMFF entries could be a good addition to any cinephile, or film enthusiast's list to binge this Christmas. These are Filipino stories, speaking our truths from our traditions and place in our world.

The films are priced at Php 250 each and will be available screen on-demand at Upstream tomorrow.