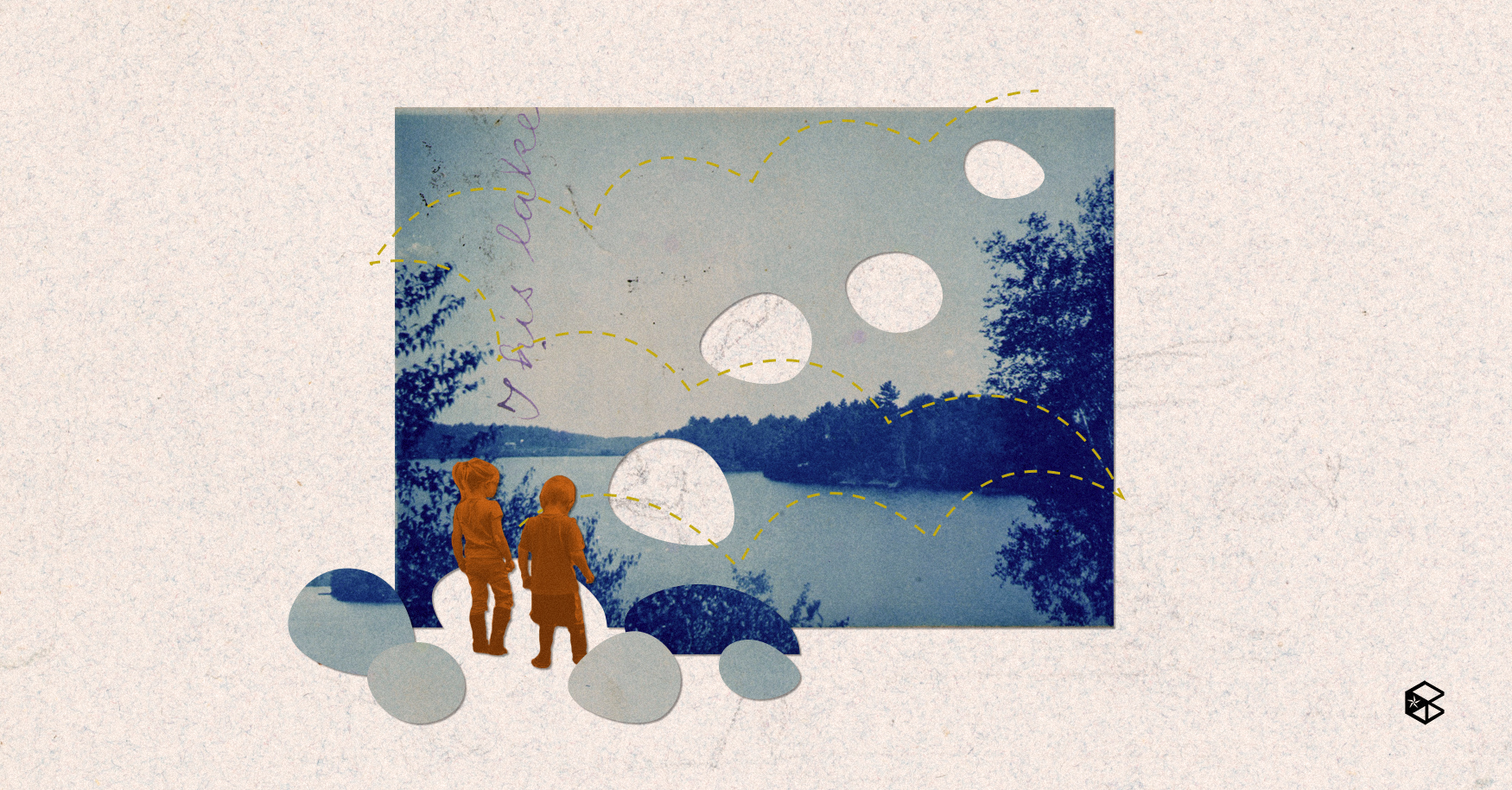 Some stones are just luckier than others.

Peter flung it as far as he could.

Plop. The lake quickly ate up the first stone. The shimmer of the water looked like a million little eyes watching the two children at play.

“Whooppee!” The little boy jumped happily. The stone landing close to the middle of the lake.

Instead of joining in, Phoebe swung her arms around in preparation. She had picked out a stone with flat sides and three sharp points for maximum spin effect. Her brother had no chance.

Plop. Plop. In one graceful swirl, she sent it skimming over the surface. The stone landed an arms-length further than her brother's.

"No fair, Phoebe! You used the lucky stone you found earlier!" Peter accused with an upturned nose.

Instead of replying, she stuck her tongue out at him.

"You said we can only use the stones near us!" Peter stomped away in a whoosh.

"It WAS near me!" said Phoebe defiantly. She had spied the stone beside the lake’s edge. Where the typically still waters undulated gently, as if pushing it forward and greeted her doll shoes. Thankfully, the water missed her socks.

"Fine," he huffed while picking out his next rock.

Peter, stone-faced, threw the second stone with his whole body this time.

Plop. It sailed past the middle. Plop. It jumped past Phoebe’s first stone. Plop. It hit a streaked grey rock jutting out of the lake.

“Whoop-Whoop! Beat that, Fee-bee!" Peter exclaimed, his voice ringing through the trees around the lake.

Phoebe looked away. To her right was an array of large rocks that the children liked to imagine as a pier to peer over the foggy horizon and upside down trees on the water. But Papa would never let them go near. She longed to climb up and jump on top of the big blocks when she gets as tall as her cousin Ami.

To Phoebe's left, she saw a growing pile of rock faces by her brother's side. Peter, who is seven but no stranger to unusual tastes, only liked coming here to find more treasures for his rock collection labeled with what he calls their “Proper Scientific Names.”

So, when Phoebe told him that today's adventure was at the lake, he agreed easily once she hinted at helping him hunt for some volcanic rock. Of course, she didn’t know if there were volcanoes here but she knew there were lots of rocks strewn around.

The One Thing Phoebe did tell him was true; It's a Phoebe Fib Fact. She said that she could toss a stone further than Peter over the lake.

And so, beat him, she will. Eyeing the off-white rock two footsteps further than his last throw, Phoebe twirled and turned her arms for her second stone's dance.

It flew through the air, spinning. Plop. Plop. Plop. In three satisfying swish movements, her second stone landed a little off-center but much further than Peter's on a pale grey rock jutting out of the water.

"Did you see that?! I got the Metamorpheus rock," She beamed with joy.

"Whatever. You still have to beat me anyway. This is your last stone."

The lake caught the sun at that moment, forcing them both to blink. The rays were starting to shrink into the water.

Peter dug his heels into the ground. His turtleneck and sleeves were streaked with dirt, and his pants were painted with mud. Glints of light touched his hair and the silk seams of Phoebe’s ivory dress.

"Peter? Phoebe!?!" The familiar screech of their cousin Ami cuts in through the tree cover.

Before Phoebe could stop him, he waded into the water and splashed around. Inky mud clung to their clothes as dust in the wind met stained wet patches.

"PETER, PHOEBE! Your papa will be home soon!" Ami's call was starting to grow closer. Phoebe gulped, trying to wipe away the dirt on her shoes.

Plop. Plop. Plop. Plop. The lake rippled as a stone lightly touched the surface of the waterbody. The children watched with widened eyes as a stone skipped back to the mouth of the lake, coming to a full stop in front of Peter's shoes.

Shivers tickled Phoebe's neck as she felt a pull on the ribbons of her dress while a pull on the scruff of Peter's shirt loosened a sharp yelp.

"I thought you two were lost! You're in so much trouble," said Ami, seeing traces of the lake all over them, pushing them towards home.

Phoebe peered over her shoulder before she could lose sight of the lake gleaming in amusement as they walked away arguing.

Out of the corner of Phoebe's eye, she saw the stone skip once more, skimming over the water before plunging into the stomach of the lake. Her mouth unloosens a winning smile, as a million little eyes winked into the sundown.