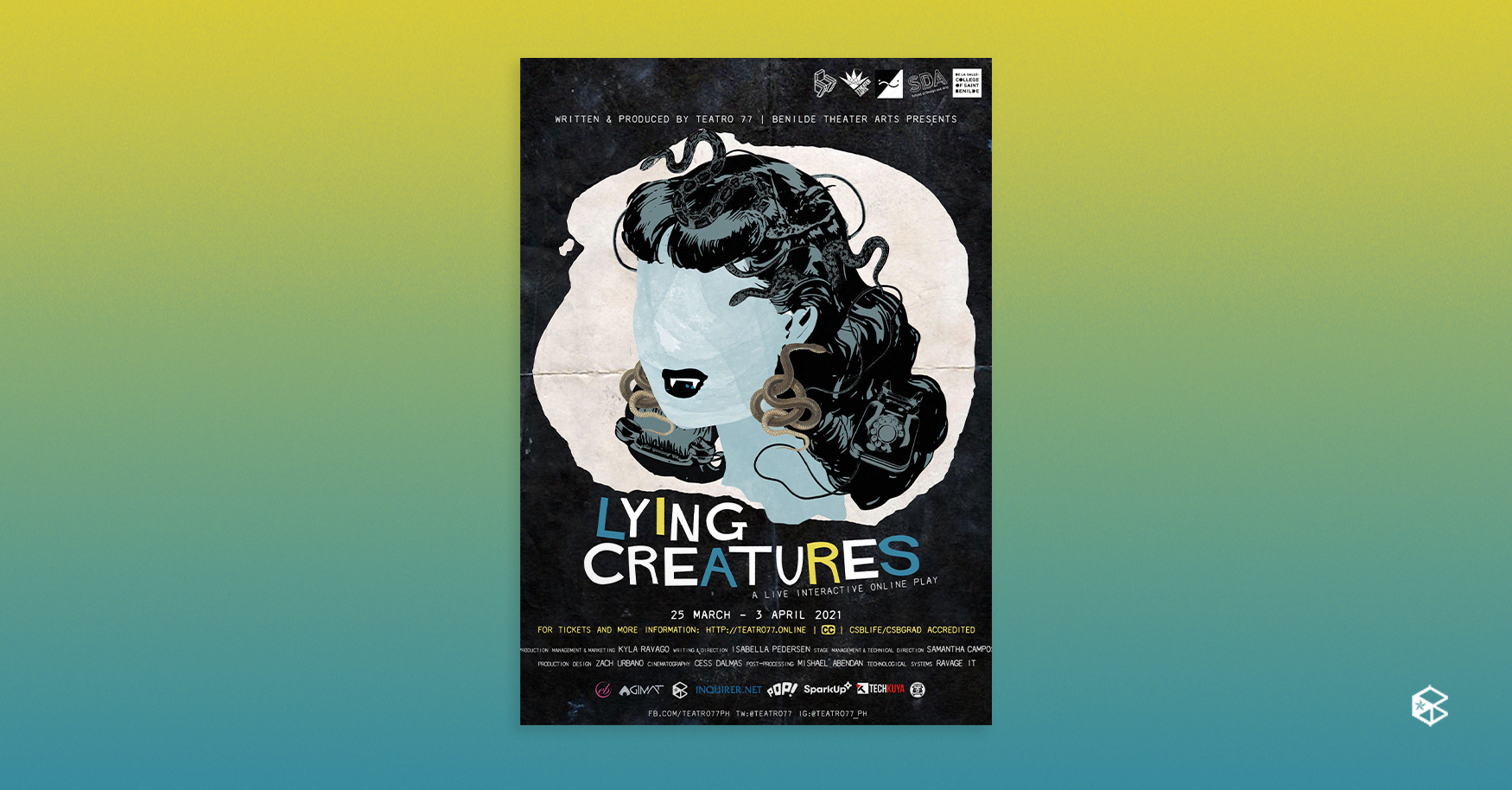 Teatro 77’s “Lying Creatures” explores the truth and its subjectivity

Truth is whatever you want it to be.” -The Gorgon, Lying Creatures

Take a trip down memory lane as the College’s Theater Arts production house Teatro 77 brings you an interactive virtual theatre experience on March 25 to April 3. Lying Creatures follows a Lunan Police Department detective investigating the missing case of the Lunan City Mayor’s daughter, but it seems that the suspects are not what they seem.

Produced as a thesis by ID 117 AB Theater Arts (ABTHA) students Samantha Campos, Isabella Pedersen, and Kyla Ravago—Lying Creatures is a suspenseful missing-case play revolving around a young lone detective, her police chief, and a journalist. An interesting mix of mythical creatures: a Gorgon, Vampire, and a Witch will leave you in a search for truth amongst these “lying creatures.”

Where the truth lies

Maintaining a level of mystique all throughout with nameless characters and a literal painted-on black-and-white “filter,” Teatro 77 shifts into the virtual experience without making it feel like a recorded film. Pedersen even explains it as the production team being “passionate about trying to preserve [the essence of live theater], as in theater, you cannot edit it; it is part of the art form to keep theater as close to its original form as much as possible,” during a press preview with The Benildean.

With only one actor (The Detective) permitted to be on stage due to quarantine restrictions, the rest of the characters were brought to life through the telephone calls that The Detective receives from her office. The production team creatively incorporates live discussions and allows the decision of the audience a part of the play—through chat, voluntary video calls, and a voting system during the show proper. All of these are effectively strengthened by the entire feel of Teatro 77’s marketing and social media teasers.

Moreover, Lying Creatures also relied heavily on sound design more than anything, with the production set in a limited office setting. Likewise, the audience is limited to whatever The Detective sees and hears. For that, you’re left in suspense of tracking the culprit of the abduction in the same way that The Detective is—the frustration, confusion, and horror of not knowing what the truth is, and being so close to finally finding it.

So, who’s lying and who’s telling the truth with regards to the missing daughter? You’ll have to find out yourself.

Book a ticket to Lunan City and catch the show dates from March 25 to April 3.

Tickets are priced at Php 120/USD 2.50 available on their website. For more information, updates, and even show promos, check out Teatro 77’s official Facebook page.

Tags: BLIP
Tweets by TheBenildean
Printed from https://read.thebenildean.org on 16 May 2021