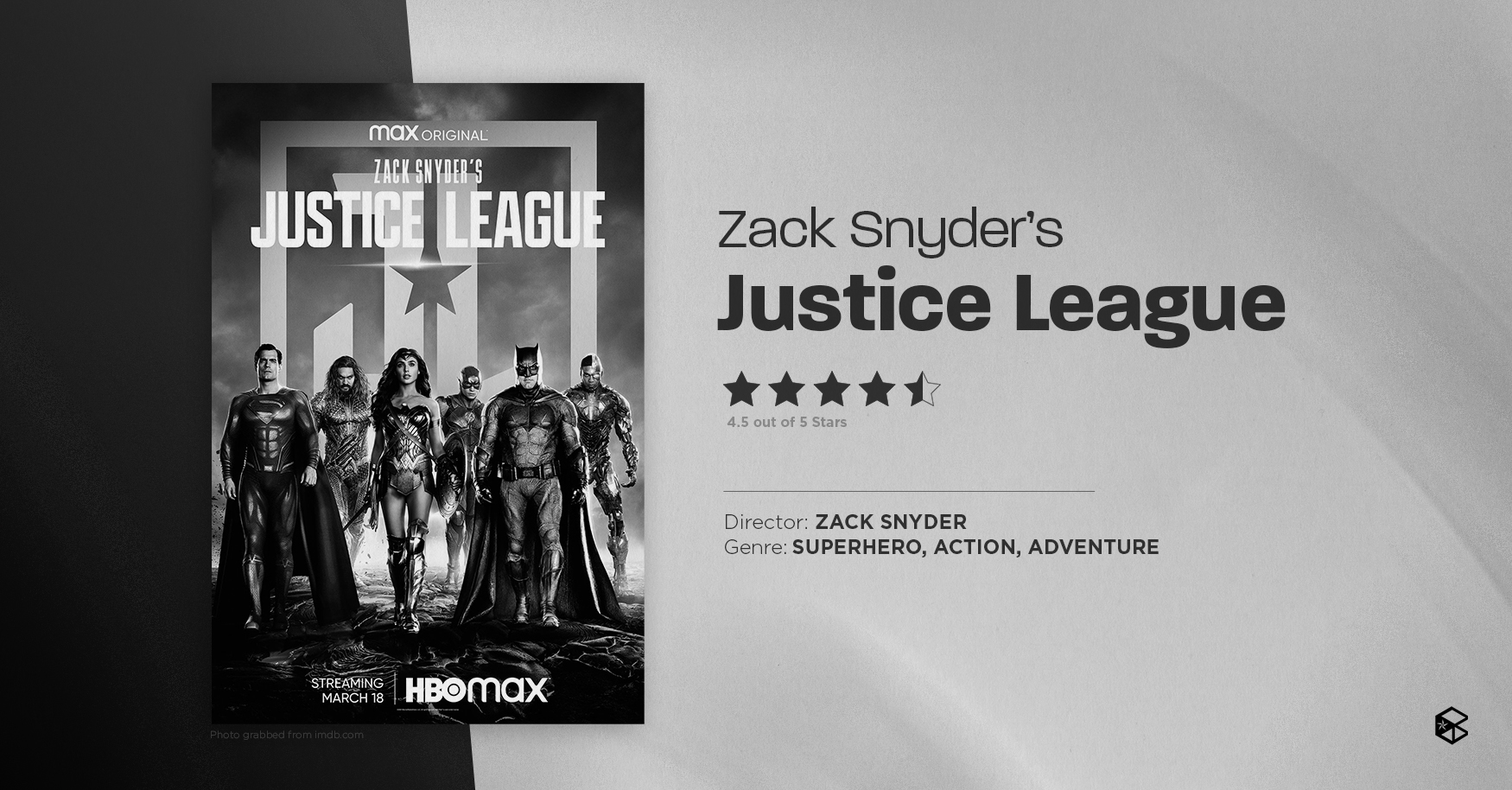 From director Zack Snyder’s true vision for the story, the four-hour epic assembles DC’s pantheon of heroes in an unprecedented format.

The culmination of massive fan support and a filmmaker’s vision now fully realized—the age of DC’s finest heroes is here and as it should be. Zack Snyder’s Justice League premiered on March 18, 2021 via the streaming service HBO GO in the Philippines. In contrast to the theatrical cut, 2017’s Justice League suffered a doomed production and heavy studio interference.

The path not taken

After his daughter’s untimely passing in the fight against depression, Snyder had to step down from directorial duties and was unable to finish the final cut of the film in May 2017. Director Joss Whedon was hired by Warner Bros. to rewrite the script and shoot extensive reshoots.

The studio wanted the film to be more hopeful and lighthearted, in order to replicate the success of Marvel Studios’ direction for the Marvel Cinematic Universe. This was due to the underwhelming reception of 2016’s Batman v Superman: Dawn of Justice, which was criticized for being too dark and serious.

Upon its November 2017 release, the film critically and commercially bombed at the box office. It was dubbed as a “Frankenstein” of a film—some criticisms include finding the tone inconsistent with the obvious reshoots, forced and lazy humor, and the mandated two-hour runtime ultimately hurting the story and character development.

An ideal of hope

With the fan’s call for Snyder’s vision to be honored and shown to the world, the #ReleaseTheSnyderCut movement was born. Years of cryptic tweets on social media from the actors, crew, and Snyder himself ultimately paid off.

In May 2020, during Snyder’s Man of Steel Watch Party on VERO True Social, the monumental announcement for Zack Snyder’s Justice League was already a triumph in itself. Though a complete “cut” hasn’t really existed at the time, Snyder’s scenes with unfinished VFX were then worked on by Weta Digital VFX team to rework what the 2017 theatrical cut altered.

The movement also forged extraordinary ventures—having recently raised $500,000 for the American Foundation for Suicide Prevention (AFSP), in the support for mental health care and suicide awareness and prevention. Along with, The Autumn Snyder Tribute Fund is a personal campaign in support and honoring the late Autumn Snyder’s legacy and sponsored by the Snyder Family.

It’s safe to say that this incredible milestone parallels the unity of the Justice League and that together, you can truly accomplish wonders.

Given the four-hour runtime, the film is divided into six chapters (excluding the epilogue) that enable the story to breathe and run smoothly. Though the pacing isn’t entirely perfect, it manages to hook you and look forward to what comes next. Theatrically, the intended intermission comes at the end of chapter four and somewhere around the two-hour mark. Some may argue that this could have been split into two parts, but the beauty of streaming services is having more freedom for storytelling and the viewing experience at the comfort of one’s home.

The film’s strong suit is the development of the beloved DC characters being more fleshed out, as we stay invested and care about them. Fisher’s Cyborg and his story arc is brilliantly put together as he becomes the “heart and soul” of  both the team and the film. Miller’s Flash gets to shine as the Scarlet Speedster, as well as trying to get ahead in life as Barry Allen. Affleck’s Batman and his motivations in putting a team together are defined by his restored faith in humanity. Gone is the abomination of the CGI work from the extensive reshoots by Whedon and the forced humor and callback to what they say is a “hopeful” take on Superman, ala 1978’s Superman: The Movie.

The heroes usually take up the spotlight in superhero films. It’s somewhat rare to have villains that are as compelling and interesting as the heroes. We do get a sense of his motivations and reasoning from Hinds’ Steppenwolf while we get a tease of Ray Porter’s Darkseid and bits of comic book legend Jack Kirby’s “Fourth World” mythology.

There are small moments with these characters that play a huge role in developing them further. Snyder knows and loves these characters, much so that he embraces parts of what made them iconic and innovates them to fit the film medium.

But then again, there are no definitive versions of these characters. Different interpretations exist and will continue to exist because there is an artist and a creative contributing their piece of the pie.

At the moment, we aren’t entirely sure if there’s more room for the story to grow. Snyder laid out an arc that has significantly changed throughout the years. Change isn’t entirely bad. A testament of that is this film, wherein Snyder is able to use old footage but also tailor-fit with the circumstances of the present.

Snyder also carefully planted seeds for the direction of solo projects featuring these characters would’ve partaken. Will these stories ever see the light of day? Who knows? Plans were indeed derailed for this story, but look at where it led us. Needless to say, it’s still up to the studio if they want to finance such ambitious storytelling.

From a filmmaker and artist’s standpoint, releasing this cut is a triumph. Never mess with the vision of the creator. Snyder, as well as the other cast members fought for the release; as this is the story they wanted to make and present to the wider audience.

This is for the fans, for the artistic vision, and for Autumn.

Tags: Justice League, Snyder Cut
Tweets by TheBenildean
Printed from https://read.thebenildean.org on 16 May 2021