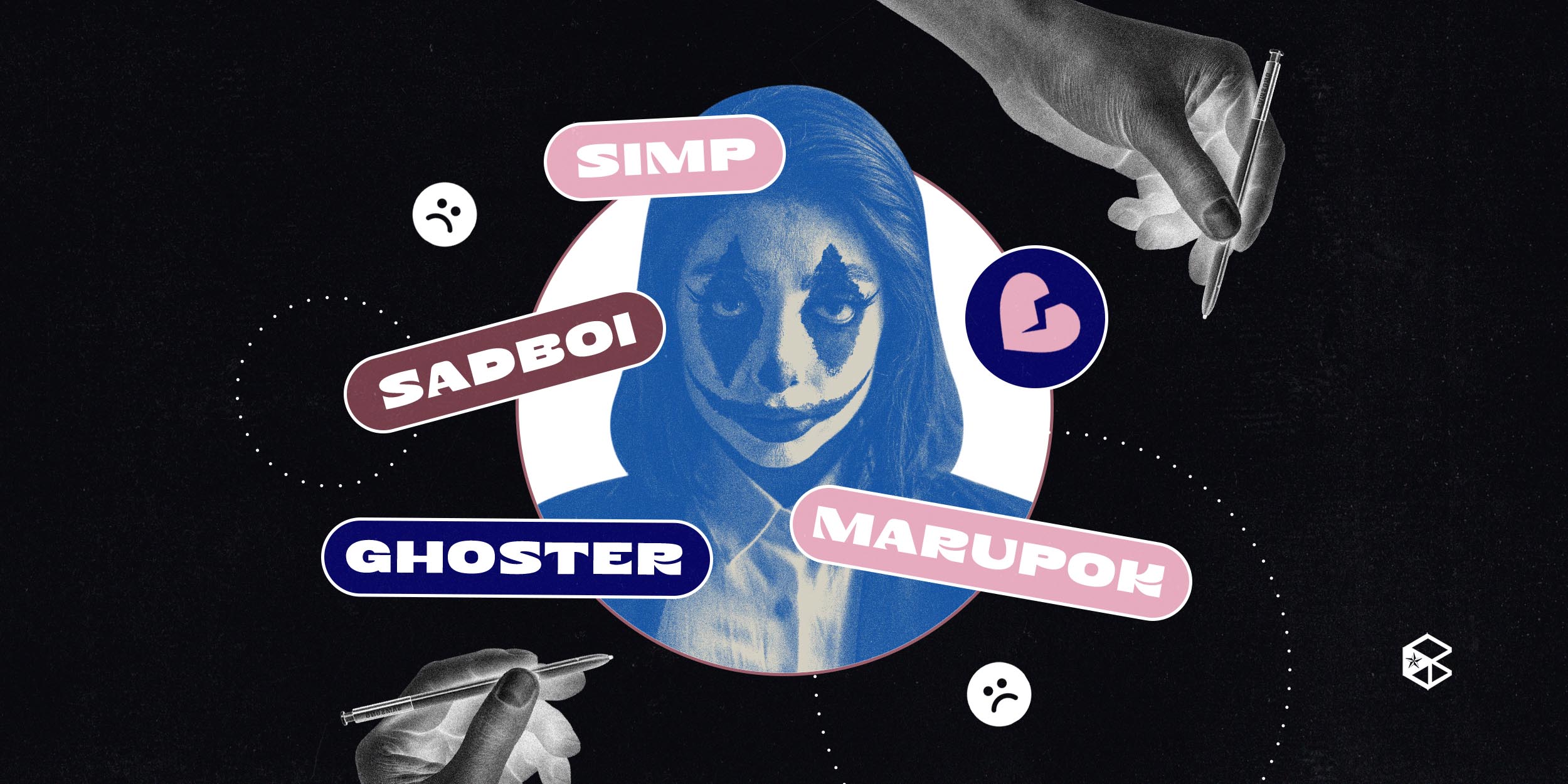 And the “Clown of the Year” Award goes to…

From a generation of hopeless romantics, “simps” and “softbois,” ghosters and the ghosted—what better way is there to celebrate a day dedicated to fools than embracing the inner clown in you?

In the grander scheme of all-things modern love, putting on clown makeup is as easy as obsessing one’s feelings over unrequited love, staying for the relationship’s sake, struggling to move on from an ex, or accepting the love you think you deserve.


One way or another, we’ve all experienced becoming a clown ourselves. Love becomes detrimental when we become foolish enough to see it blindly. For starters, when someone prioritizes the happiness of others over oneself, most of us ignore the unhealthy signs at first.

Rise of the clowns

“Clownery” has been a center of the meme society for a couple of years now. 2019 saw a rise in popularity led by film characters such as Pennywise (It: Chapter 2) and Joker (Joker). These films that featured these characters somehow captured the zeitgeist of the end of the 2010s. This was, of course, not to mimic their violent actions on film, but to embody the clown-like nature of these characters and take the meme across massive proportions.

People become slightly more open as they have found a common ground with others who share the same experiences. After all, memes create a sense of solidarity and connection. One of the unexpected online sensations during the first few months of quarantine in the Philippines is the growing “Subtle Clown Traits (SCT)” community on Facebook. A surge in interest and membership is mainly due to SCT’s variety of clownery—may it be meme-worthy conversations, hugot lines, online dating experiences, and marupok tendencies.

Anatomy of a clown

Agents of clownery divide themselves into many different categories. These classifications include, but are not limited to the following:

The Simp - A person (often male) who gives way too much care and attention to the person they like or are attracted to, and will do anything to capture their hearts. Tom Hansen (Joseph Gordon-Levitt) of (500) Days Of Summer is the embodiment of a “nice guy” who will go out of his way for a girl he likes. Tom gives the keys of his worth to Summer Finn (Zooey Deschanel) and allows her to control his feelings and emotions. He ends up chasing someone who, from the get-go, established that they’re “just friends.”

The “Softboi”/”Sadboi” - This is characterized as someone who channels one’s sadness and depression through art. However, they can also use one’s sadness as an excuse for their actions. A bit of fair warning, capitalizing on one’s emotions to gain sympathy is actually manipulative. American actor Timothée Chalamet has gained popularity because of his acting chops and dashing good-looks. His roles as Elio Perlman in Call Me By Your Name, Kyle Scheible in Lady Bird, and Gatsby Welles in A Rainy Day in New York capitalize on one’s charm and soft personality to gain sympathy and affection.

Ghoster - This is defined as a person who cuts off communication with friends or someone they’re seeing. They vanish into thin air and leave without explanation. They are prone to receiving a pile of texts, direct messages, and voicemails. While convenient for the ghoster, people at the opposite end (the “ghosted”) are often left hurt and misled.

No label - Establishing a clear label will surely lay the groundwork for a healthy relationship. Though this can work for some who are into commitment, those who do not share the same sentiment often are left with unfulfilled expectations. Checking the label is simply just knowing your limits. Are you just friends? Friends with benefits? Flings? In an open relationship? Best to get it out there.

“Marupok” -  A description of someone who vowed to stop replying quickly and indulging into their own feelings, however they fall right back into love in a snap. Literally meaning “easily destroyed” in Tagalog, having a fragile heart can mean that your emotions get the best of you. You can be marupok, but to a certain extent. Those little bits of kilig can help ease a day of stress, but know when it affects your productivity and sanity.

Return of the Toxic Ex - A past love which ended for a reason shouldn’t be something to dwell on. Prone to this behavior is someone like your friend (or yourself even) who you’re tired of giving advice to. When trying to rekindle a relationship, there are bound to be “what ifs.” This toxic relationship might keep pulling you in, but don’t give in to the temptation, hon. You’re not their therapist, so don’t do the fixing. Better to leave your ex in exile and away from your heart.

The Red Flag Connoisseur - It’s hard to see the signs clearly when you're in love, even if the person you're in love with shows red flags here and there. You may even turn a blind eye to your own intuition. Seeing the red flags and acknowledging them doesn’t happen overnight. As soon as they do something that harms your well-being, it’s better to be wary and cautious. Self-worth will always be a priority—it does not make you any less of a person to realize this later.

A joke for all seasons

To quote Mr. Anderson from The Perks of Being a Wallflower, “We accept the love we think we deserve.” In some ways, it’s true. We think whatever we’re receiving is enough, even if some may not see it that way. We as human beings give so much to others that we forget to leave some for ourselves.

The modern dating scene has evolved into a space of expressing one’s clownery, but also admitting your feelings and mistakes. We learn from experience and most especially from our mistakes. We may be ashamed of whatever form of clownery we’ve endured, but in time, we’ll just laugh it off.

Before getting into any kind of relationship, it’s better to know what you’re getting yourself into. Loving will definitely be easy if you’re with the right person. When that day comes, all the lessons you’ve learned will help you become a better person and a better partner.