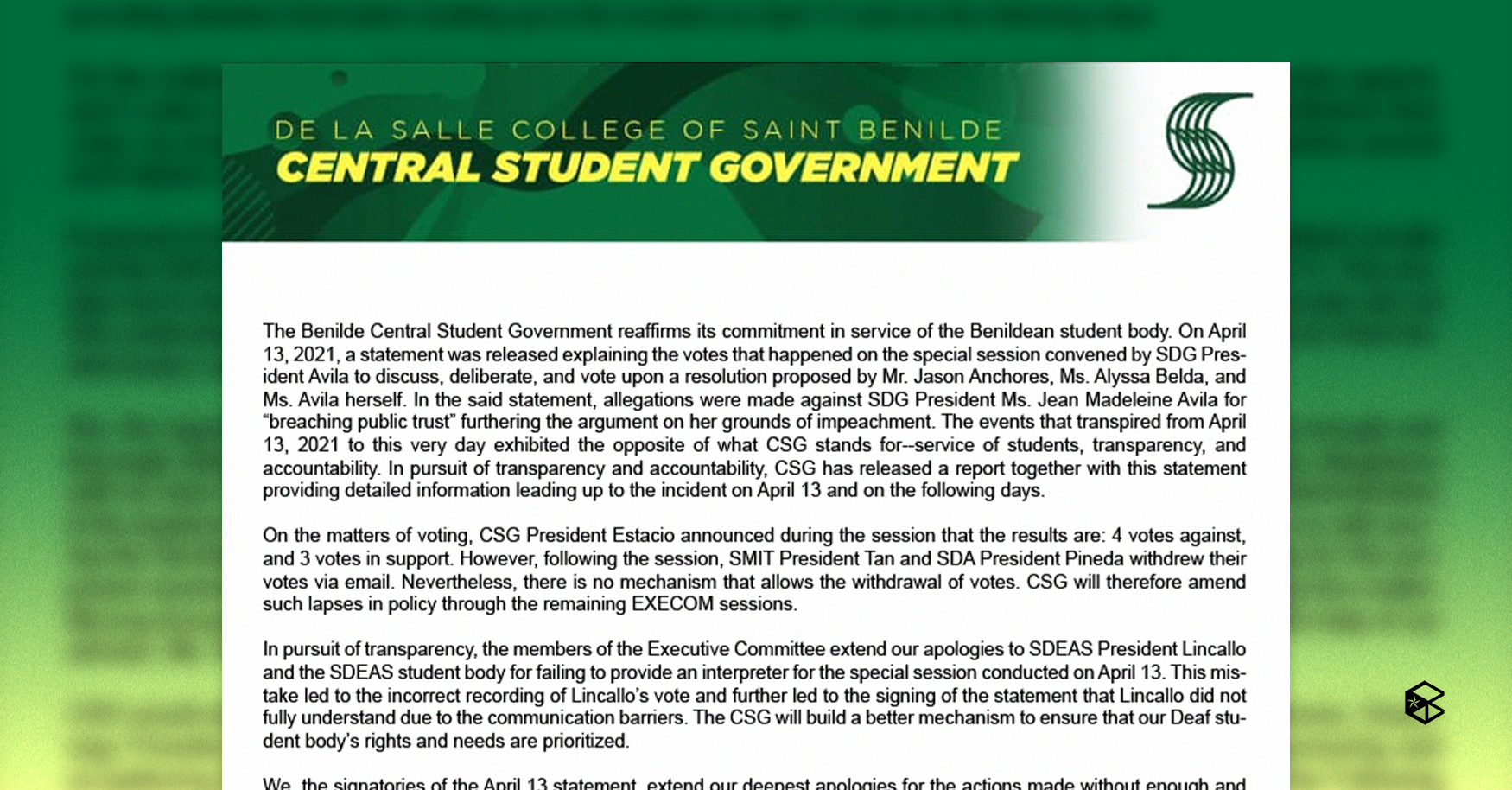 Following the released statement of CSG last April 13, which is now taken down, regarding SSG-SDG President Avila’s alleged violation of CSG protocol that led to her ground for impeachment due to “breach of public trust,” the apology of CSG addressed the issues and events that transcribed after the published statement. Avila had co-authored a resolution entitled “A resolution calling on the Central Student Government to include the following short-term policy recommendations in its follow-up proposal to the Academic Council following the recent COVID-19 surge in the country,” alongside former CSG President President Jason Anchores (A.Y. 2019-2020) and former Greenergy DLS-CSB President Alyssa Belda (A.Y. 2019-2020).

The proposed resolution aims to include short term policy recommendations in the CSG’s follow-up proposal to the Academic Council. Moreover, the resolution also introduced strategies that CSG can include in their policy making process that are deemed more accessible amid the worsening COVID-19 situation in the country.

The short-term policy recommendations in the proposed resolution are as follows:

The full resolution can be viewed here: http://bit.ly/Proposed-Resolution

Furthermore, in the same statement, the CSG Executive Committee extended their apologies to SSG-School of Deaf Education and Applied Studies (SDEAS) President Ian Paulo Lincallo for CSG’s failure to provide an interpreter during the special session that led to the incorrect recording of Lincallo’s vote.

“The CSG will build a better mechanism to ensure that our Deaf student body’s rights and needs are prioritized,” the statement read.

Moreover, School of Management and Information Technology (SMIT) and School of Design and Arts (SDA) SSG Presidents Michael Tan and Phoebe Pineda, respectively, withdrew their respective votes via email. However, CSG stated that “there is no mechanism that allows the withdrawal of votes.” Thus, the voting for the proposed resolution is three votes for and four votes against, according to CSG President Presley Estacio.

Lastly, CSG apologized to the College’s administration and student body for not embodying what the institution stands for.

CSG reaffirms their commitment in service of the Benildean student body, thus they plan to move forward by serving the Benildean community to their best of ability by accommodating the needs of the student body.

Supporting documents are made available for public viewing via bit.ly/3mPklIk.

In lieu of the activity ban imposed by the College in consideration of final examination week for the second term, the public apology statement of Benilde CSG was only published a week after a series of heated exchanges between the authors of the proposed resolution and Benilde CSG Executive Committee via their respective Facebook accounts.

Tags: Central Student Government
Tweets by TheBenildean
Printed from https://read.thebenildean.org on 16 May 2021