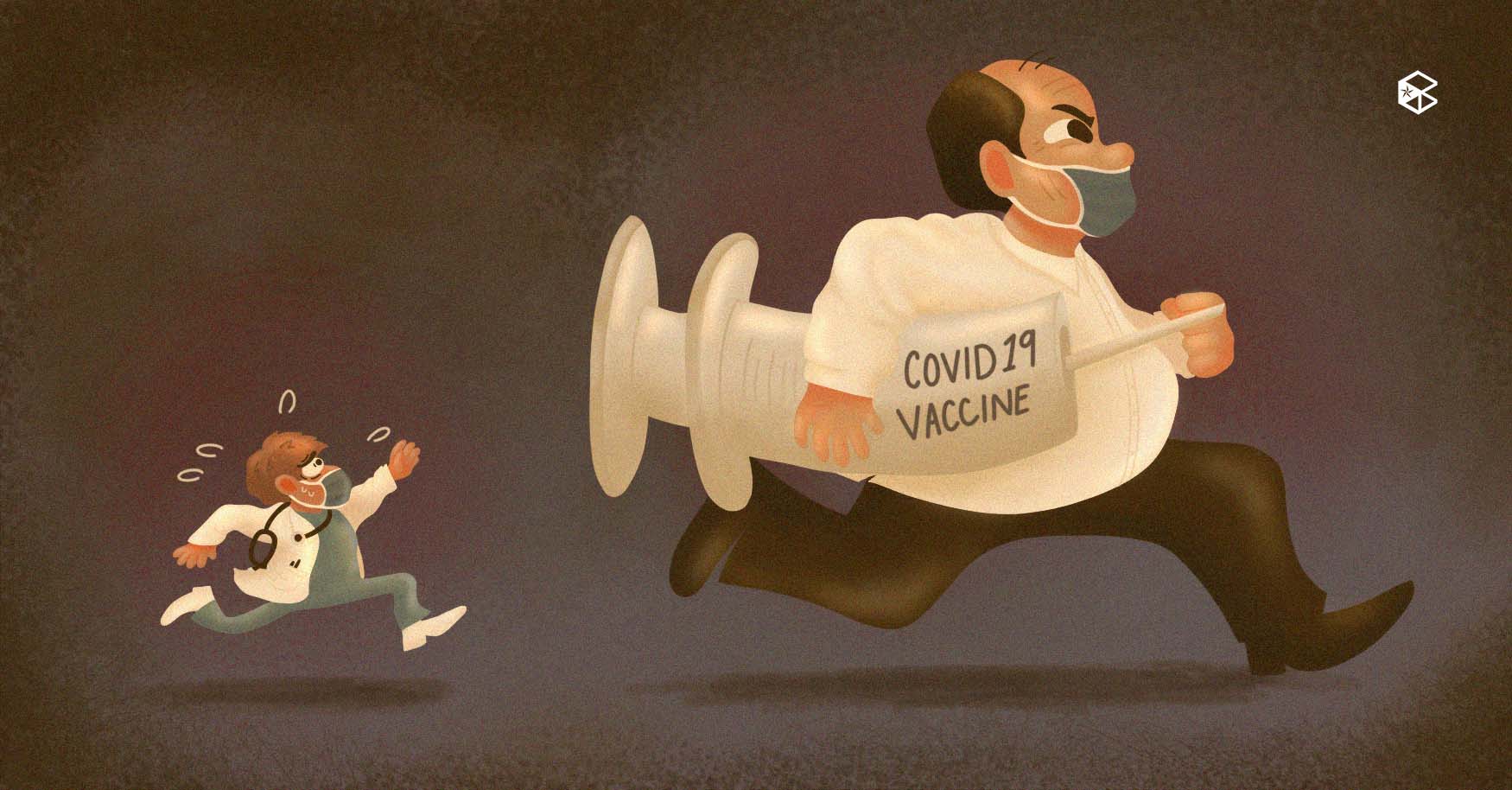 A shot of apathy in vaccine line-jumping

Disregarding the priority list of vaccination poses a threat on the welfare of frontliners and the nation. With a staggering nearly 900,000 COVID-19 cases in the Philippines as of writing, the lives of those who save lives are the utmost priority.

“We call on the public to follow our prioritization [...] because it is our moral obligation to allow our frontliners to be the first to receive the protection they need and deserve, especially amid this surge,” National Task Force Against COVID-19 Chief Implementer and Vaccine Czar Secretary Carlito Galvez emphasized, alongside the Department of Health (DOH), in a press release last March 25. Most of the reported vaccine line-jumpers were non-medical local officials who took the vaccine meant for healthcare workers ahead of their turn in the IATF-EID-approved priority list.


With lack of existing penal provisions in the COVID-19 Vaccination Program Act of 2021 (RA No. 11525), line-jumpers are still not held criminally liable, which may increase the possibility of unauthorized vaccination jabs.

Currently, there’s still a significant need for more hospital capacity and resources, better response of local governments in testing and isolating suspected and positive cases, and a decrease in people’s mobility to decrease the COVID-19 cases. More so when the staggering 12,000 daily cases takes a heavy toll on the day-to-day struggle of the healthcare industry against the pandemic.

Since some hospitals are at their full capacity, with NCR alone having 59% ward beds, 68% isolation beds, and 76% ICU beds occupied as of March 30; people find difficulty in seeking admission and immediate assistance.

(“We feel those numbers. We feel it in the hospital but we’re full and even employees have tested positive. What’s ironic is that just when the vaccination program started, that’s also the time when the number of positive patients increased.”)

On February 5, the Inter-Agency Task Force for the Management of Emerging Infectious Diseases (IATF-EID) approved the priority list of the different population groups for the inoculation of the COVID-19 vaccines. In this list, “Priority Group A1” are front-line healthcare workers in local, private and public facilities, including both health professionals and non-professionals like barangay health workers, nursing aides, students, and janitors. This is followed by senior citizens, and persons with comorbidities under Priority Group A2 and A3, respectively. According to DOH, these top priority groups have a higher risk of exposure to the virus, and are considered as vulnerable groups.

Last March 23, Secretary Galvez updated that there are at least 408,995 vaccinated healthcare workers, only 24% of its approximate 1.7 million population. Combining the million doses of CoronaVac and 525,600 AstraZeneca doses donated by China and the COVAX Facility, to the million CoronaVac vaccines purchased, the country has a hold of 2,525,600 vaccines as of March 29. Though it had an increase of a million, the supplies of vaccine remain limited to provide for the top priority groups; hence, the government calls for the strict adherence to the Vaccine Deployment Plan.

Around 76% of the healthcare worker population remains unvaccinated as of March 23, yet they are still performing their medical duties, coupled with the risk of catching COVID-19 and its variants.

One vaccine shot for a frontliner can ensure better protection for themself and those around them. Which is why those inoculated ahead of their turn are quite insensitive to the critical situation of our frontline healthcare workers.

Vaccine line-jumping for a shot of apathy

Some local government officials, such as the eight mayors investigated by the Department of the Interior and Local Government (DILG), had been administered by the vaccines despite not yet being classified in the priority group A1, A2, or A3. By April 2, the IATF had only approved the vaccination of those mayors and governors of “high risk and critical” areas due to the limited supplies of vaccines, recategorizing them under “Priority Group A1.5,” and prioritizing the 400 local chief executives in the areas of NCR Plus, Cordillera Administrative Region, Central Luzon, CALABARZON, and Western Visayas.

Among the initial batch of mayors reported to have received an unauthorized inoculation include Mayors Alfred Romualdez, Dibu Tuan, Sulpicio Villalobos, Noel Rosa, and Abraham Ibba from regions that weren’t considered as “high risk” areas. They were issued show-cause orders by the DILG officer-in-charge Bernardo Florece to explain their notorious actions.

Mayor Elanito Peña of Minglanilla in Cebu, and Mayors Arturo Piollo II, Victoriano Torres III, and Virgilio Mendez in some municipalities of Bohol, had also received vaccine jabs alongside the inoculation process of health workers.

Though four out of five of the initial batch of mayors still have no response for their show-cause orders as of March 30, some had given their reasons for skipping the line, mostly revolving around the ideology of boosting the confidence of the community in vaccines, which was labeled by President Rodrigo Duterte as a “universal excuse” that remains unacceptable given that there had been an agreed set of priority groups. Meanwhile, Mayor Rosal claimed that his inoculation was approved by the DOH Regional Director Ernie Vera.

Presidential Spokesperson Harry Roque highlighted that if all mayors receive vaccine jabs, it will possibly consume 44 million doses of COVAX Facility vaccines. With currently two million vaccines at hand, and only nearly one-fourth of the healthcare workers vaccinated, all the more should the focus be on the inoculation of those who need it most.

“I don’t buy the reason—they did it for the people or to build confidence in the vaccines—because the people will not have access to vaccines till July! The only qualified people as of this point are medical frontliners,” Senator Sherwin Gatchalian explained regarding how line-jumping is unfair for healthcare workers.

As far as reports say, there is no assurance if these local officials only inoculated ahead of their turn out of self-interest. Although promoting vaccine confidence could aid mass vaccination programs, this “excuse” being at the expense of utilizing the vaccines meant for the severely affected and vital priority group, especially the healthcare workers, makes it insensitive and wrong.

Healthcare workers are prioritized to prevent the likelihood that they would test positive in COVID-19 since this would require them to isolate themselves, and even add up to the overwhelming number of patients.

Healthcare staff shortage is already an issue. So, how can the nation continue to fight the pandemic with unarmed, injured, and fewer men and women in the front lines?

Keeping the fire of hope alive through and for the frontliners

Local officials truly concerned for public welfare will wait for their turn to be vaccinated, at which they could promote vaccine confidence. More so, they must first recognize the much needed protection of healthcare workers.

(“We have yet to ask for a timeout but we’re already feeling the spike in cases. At the same time, we are understaffed because we have health care workers who are sick and that affected us in manning our posts, we feel tired so there’s a possibility, if this spills over, that we’ll ask for a timeout.”)

We all want this pandemic to end. However, this will only come into fruition if we cooperate with the health protocols, and consider the lives of those at stake when we violate these orders.

Full hospital capacities with healthcare staff shortage, lack of medical resources, and an overwhelming number of cases are alarming the nation, and pushing us to be clearer and stricter with our priorities.

Everybody has their turn to get a shot. While we’re waiting for ours, it’s just right to lend the vaccines to those who need it most and serve as our nation’s hope for recovery, the relentless front-line healthcare workers who may even save our own lives.

Tags: COVID-19, Vaccines, COVID-19 Pandemic
Tweets by TheBenildean
Printed from https://read.thebenildean.org on 16 May 2021