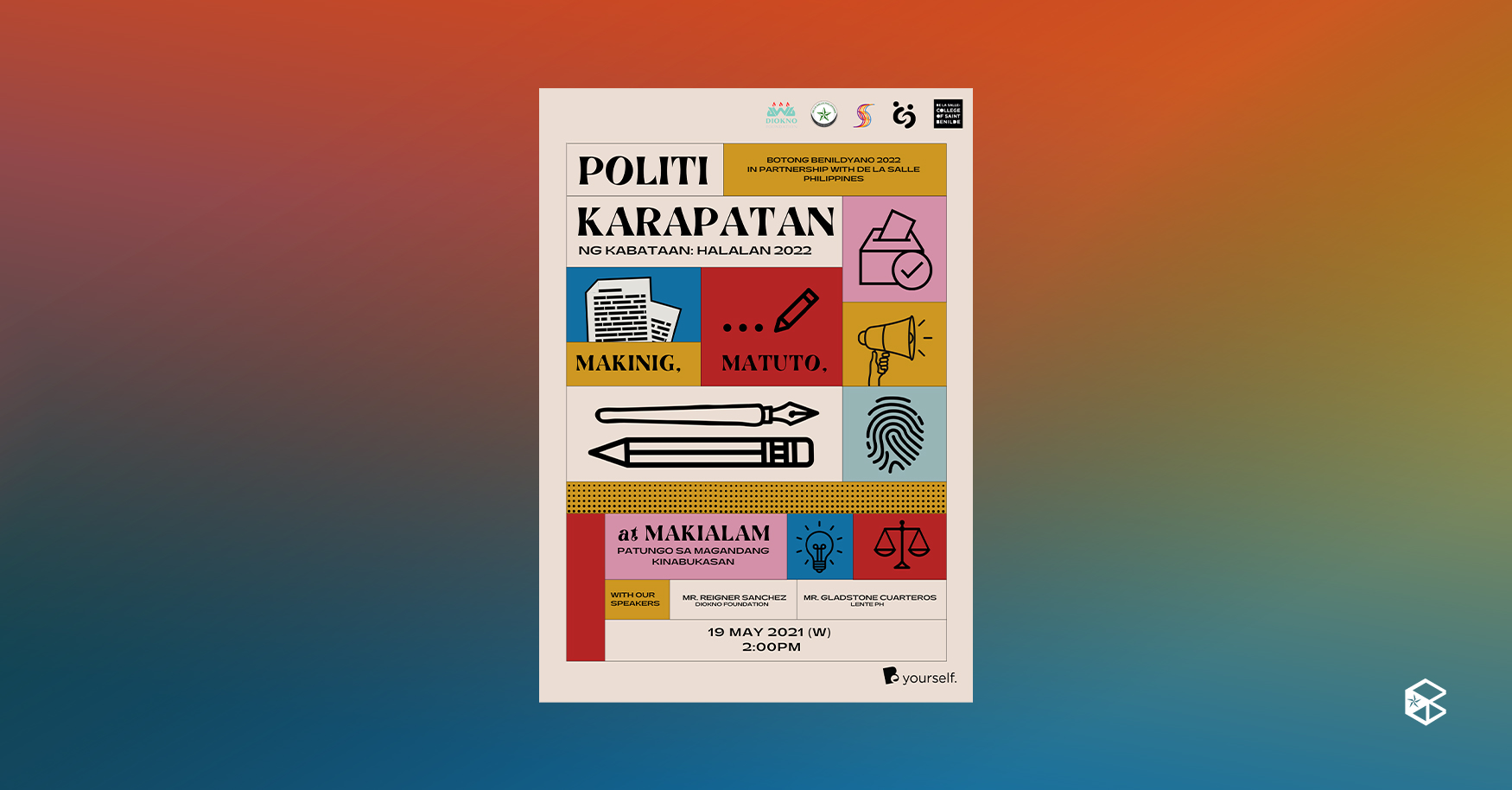 With the goal to educate the Benildean community and eligible voters on their rights and responsibility to vote, Botong Benildyano 2022, a project of Benilde Central Student Government (CSG), officially commenced its first webinar session titled “PolitiKarapatan: Makinig, Matuto at Makialam Patungo sa Magandang Kinabukasan” yesterday, May 19, via Zoom.

In partnership with De La Salle Philippines and Diokno Foundation, the webinar highlighted the importance of taking part in the democratic process and how it can make a difference in the state of the country.

The state of the Philippines amid a health crisis

To kick off, the first guest speaker Mr. Gladstone Cuarteros, current National Coordinator of the Lasallian Justice and Peace Commission (LJPC) of De La Salle Philippines, discussed the current situation of the country amid the global pandemic and how the current administration is handling the situation.

“More than one year into COVID-19 pandemic yet we still do not see a clear government strategy in containing the virus. [There is] no consultation nor participation from the people,” Cuarteros said.

He then gave a two-part analysis on the actions of the government on “lockdowns and waiting for the vaccines.” However, Cuarteros dubbed the lockdowns of the country as “very militaristic” due to the reported abuse to community quarantine violators.

“In one year under lockdown, there were a number of abuses by the security forces. That is one limitation of a militaristic approach when you [the government] try to control the behavior and mobility of the people,” he stated. According to Cuarteros, the strict lockdown only further eroded the democracy in the country due to its restrictions and militaristic approach.

Furthermore, Cuarteros also added that another strategy of the government in combating the health crisis is to wait for the vaccines. He mentioned that although there are already vaccines in the Philippines and that the vaccination rollout started last March 1, the country is lagging behind compared to others.

Lastly, Cuarteros cited some policies promulgated by the government that lack concrete provisions that caused confusion among citizens. He cited the lugaw incident in San Jose Del Monte, Bulacan last March as one of the effects of unclear policies, where barangay officials apprehended a delivery man for buying from a lugaw vendor despite exemptions of food delivery during curfew hours.

Meanwhile, according to Cuarteros, the global pandemic also paved the way for the emergence of good Local Chief Executives.

“There are mayors who have been very innovative and translated the IATF guidelines according to the context of their own locality,” he stated.

“If you believe that this government is not performing well, we need to educate our people much better [...] For better governance to happen, we need to rebuild democratic institutions [that] usher in change,” he concluded.

Importance of youth participation in the upcoming National Election

Co-founder of Give.Ph, a volunteer-run organization that aims to support Filipino learners, and Diokno Foundation Representative Reign Dawn Sanchez discussed with the audience on how and why the youth should register to vote.

Sanchez commenced his discussion with the question, “Why is it [voting] important?”

“It is not free, it was fought for [...] It took generations and decades to be able to ensure that we enjoy the rights and opportunities that we have today in terms of voting,” Sanchez said as he discussed the history of the people’s right to vote.

Moreover, according to Sanchez, voting is more than just a right, it is a responsibility of every citizen as the most important title in any democracy are the citizens. "The right to suffrage is a right that should be exercised by all.”

According to Sanchez, the median age of the Philippine population is 24.3 years old thus stating that the youth have the most impact in terms of nation building.

Meanwhile, the following are reasons why there are small population of youth voters:

Thus, Sanchez reminded the audience that the leaders they elected affect the issues that the citizens care about.

“We are electing a set of leaders, ranging from the president to senators, who will be leading us for the next six years. As seen in the COVID-19 crisis, the cabinet secretaries play a huge role in what is happening in the country. Vote for leaders who we know are also advocating for issues that we care about,” Sanchez stated.

To end, Sanchez also walked through the audience the process of registration for appointment via COMELEC's irehistro.