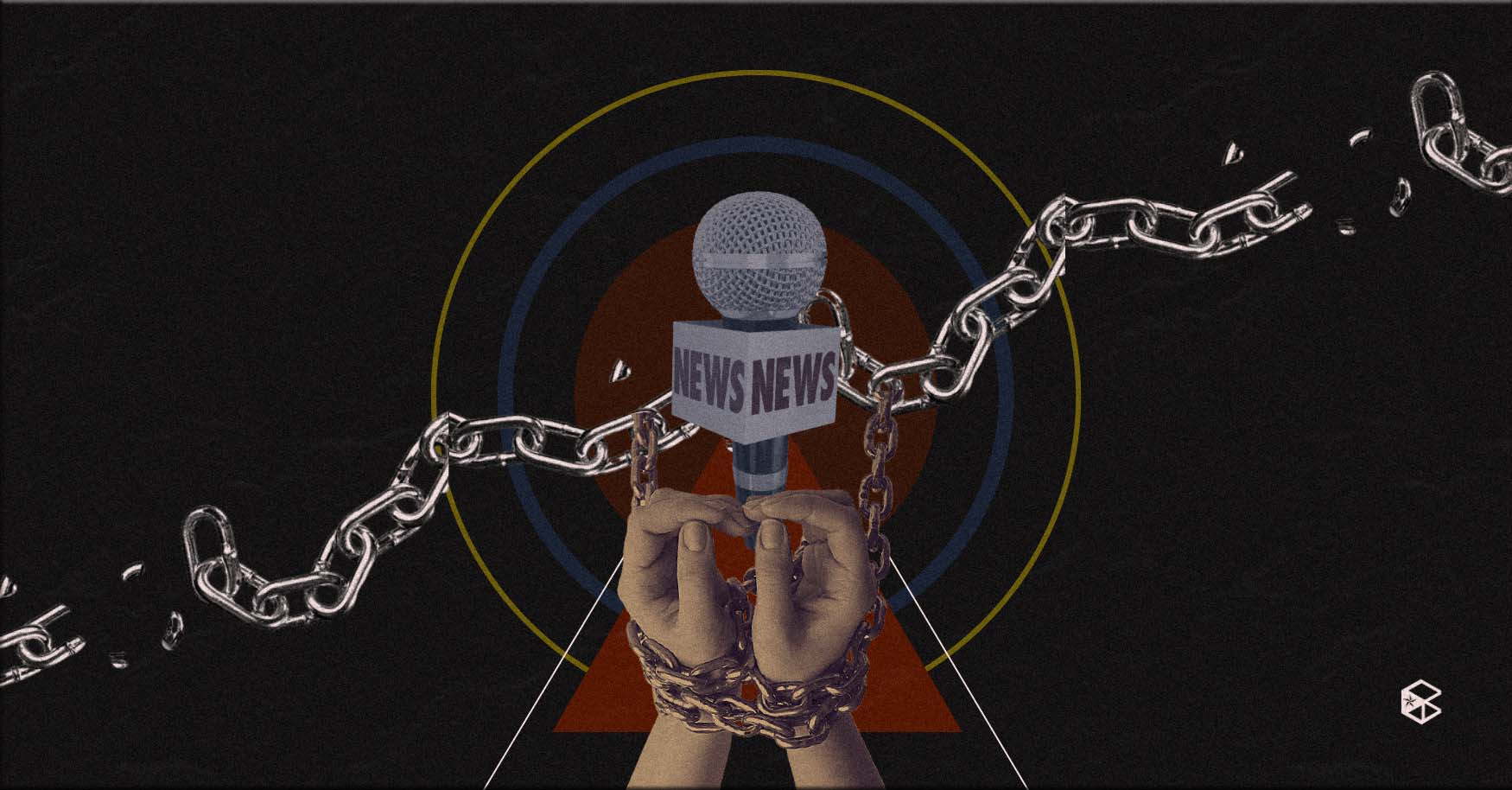 Reevaluating “freedom” in Philippine press freedom during the pandemic

Despite being a democratic country, press freedom and freedom of expression in the Philippines is still undermined. To make matters worse, it was further restricted during the pandemic—the time where a free and factual flow of information was needed the most.

With cases such as the Ampatuan Massacre and attacks on press during the Martial Law, the Philippines has always been on the bottom in championing press freedom. Injustices and flaws in the system continue to prevail, as improvements have never seen the light of day in the previous administrations. Duterte’s Administration is not an exception, where claws are sharpened to diminish the freedom of the press amid the pandemic, shackling press freedom more than ever.


As the pandemic arises, it is ideal upon countries to alleviate the number of COVID-19 cases and expand the role of the press in disseminating information across its stakeholders given the restrictions imposed upon. However, when looked upon in the Philippine context, its government’s response shows otherwise.

According to the Reporters Without Borders' (Reporters Sans Frontieres or RSF) 2021 World Press Freedom Index, the Philippines ranked 138th out of 180 countries in line with the level of freedom provided to journalists. This is the country’s fourth consecutive year of dropping its rank in the index, which was rooted in various factors.

Oppress and repress the press: The list of press freedom attacks in the Philippines

RSF cited that the 2021 World Press Freedom rank is highly affected with the continuous attacks of incumbent President Rodrigo Duterte and his administration on the press, particularly in the government-backed shutdown of ABS-CBN, the country’s largest broadcasting company, and its “grotesque judicial harassment campaign” and cyber libel conviction against Rappler and Rappler CEO Maria Ressa. They also cited that the media persecution was worsened with the rise of fake news, misinformation, disinformation, censorship, “online harassment campaigns orchestrated by pro-Duterte troll armies,” and “cyber-attacks on alternative news websites and the site of the National Union of Journalists of the Philippines.”

Amid the pandemic, the Republic Act (RA) 11469 or the “Bayanihan to Heal as One Act” that was directed by Duterte and passed by the Congress last March 23, 2020 included a provision on penalizing “fake news” in the sixth section of the passed law. In less than a month from its implementation, 60 individuals across the country had already been charged by government authorities in line with the said provision. This opens up circumstances and danger for random charges to point out a report or post as “fake news” due to a lack of understanding of the provision and feeling of threat from officials who felt that they have been objected to criticism. The lockdown prevents and restricts public protest, and with the curtailing the freedom of expression in social media, the voice of the people has been further controlled and silenced.

Another alarming and controversial legislation is RA 11479, or the Anti-Terrorism Law, which was passed last July 2020 despite the strong outcry from lawyers, human rights advocates, National Union of Journalists in the Philippines, some lawmakers, and journalists. This law places the security, life, and liberty of journalists on the line and raises an indirect threat and blow on the practice of journalism given the broad law provisions about how terrorism and propaganda for alleged terrorists are defined. From here, it can be seen that law weaponization has been used as a tool to oppress and repress the press that martial law declaration is no longer needed as it equates with such.

Journalists or perceived critics and oppositions of the Duterte administration were labeled as communists and/or terrorists for reporting on issues that were kept from the light and are usually subject to red-tagging, physical and online harassment, arrests, death threats, or worse, killed. These have been reflected in the cases confronted by Ressa, Eastern Vista Executive Director and Tacloban Human Rights reporter Frenchie Mae Cumpio and Northern Dispatch’s Ilocos correspondent Paola Espiritu, and the deaths of Radyo Pilipino host Virgilio “Vir” Maganes and Bicol Today local news website former reporter Jobert Bercasio. As much as there were government claims that press freedom was not under attack because journalists were still free to do their profession, University of the Philippines Diliman Journalism Associate Professor and Journalist Danilo Arao stated that press freedom is not just about being able to report, but rather to disseminate and access information, public or private or even positive or negative, without the aftermath and risks of threat.

“So that’s what we need to remember regarding the so-called freedom, or the atmosphere—that particular pretentious atmosphere of freedom that (the) media are experiencing right now,” Arao stated.

According to the Center for Media Freedom and Responsibility, there were 223 threats and attacks against the press across the country from June 30, 2016 to April 30, 2021. Furthermore, it was reported that 23.31% of them are done in the form of intimidation (followed by libel [16.59%], online harassment [8.97%], and killings [8.52%]), wherein online mediums were mainly used and state agents (51.12%) were alleged as perpetrators of the said increased attacks.

“These are the indications, no matter how anecdotal, of how press freedom has been under systematic attack. So we’re using the phrase ‘systematic attack’ to qualify the fact that laws and the entire bureaucracy have been weaponized by the Duterte administration to ensure that its concept of journalism will be one of blind obedience,” Arao mentioned in an interview with INQUIRER.net.

Undermining the (supposed) role of the Philippine President

President Duterte has made his stand clear with his low tolerance and preference on the press with his speeches and announcements as journalists are investigating and questioning the programs and actions of the government and his “war on drugs.” Ironically, these are what journalists should do: to gather, analyze, investigate, and disseminate the “truth.” According to Arao, Duterte functions as an “enabler” of the Congress’ and the judge’s decision for the ABS-CBN franchise denial and conviction of Ressa. However, this should not be the case.

The freedom of expression and press freedom is clearly stipulated in the Philippine Constitution’s Bill of Rights (Article 3, Section 4), stating that “No law shall be passed abridging the freedom of speech, of expression, or of the press, or the right of the people peaceably to assemble and petition the government for redress of grievances.”

Given that the government’s prime duty is “to serve and protect the people,” the President, as the highest appointed authority appointed to implement and abide with the highest law of the land, should protect and advocate press freedom; work with the media to ensure free flow of expression and information; protect the rights of its journalists and its people, and; open criticisms as a point of improvement rather take it as a point of offense.

Protecting the freedom of the press

A free, open, and pluralistic press is the building block of an informed, rational, critical, and empowered citizen and society. Without it, knowledge about public information and government programs and services would be left in disarray and dialogue on domestic issues, public grievances, and government legislations would be out of sight.

Thus, the citizens and officials must work hand in hand to eradicate biased news and information, prevent misinformation and disinformation, and stop the spread of fake news to prevent corrupt minds in society and to regain the trust and relationship between the government and society to function wholly and inclusively. Problems and outcries are raised because there are flaws in the system that need to be corrected. Since the government is made and chosen by the people, for the people; thus, good governance, transparency, and accountability must be practiced, as press freedom is one of the cornerstones of democracy.

As World Press Freedom Day is celebrated today, may Filipinos be awakened and reminded of the significance of press freedom in honor of the thousands of lives of journalists and media organizations who have fought and are still arising to the status quo to provide transparency and fact-driven information to the public.

Tags: World Press Freedom Day
Tweets by TheBenildean
Printed from https://read.thebenildean.org on 16 May 2021