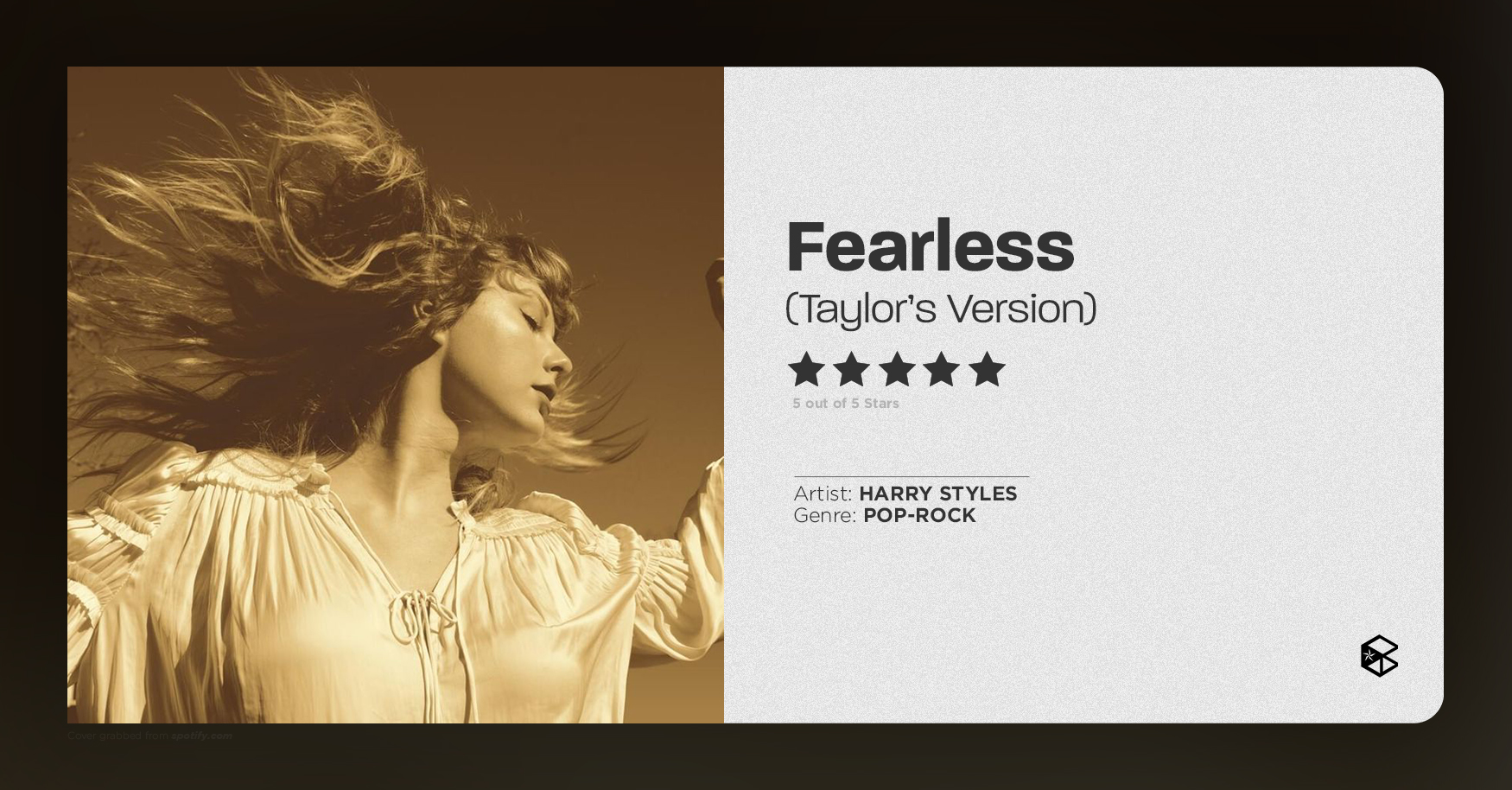 Last April 9, American pop star Taylor Swift released Fearless (Taylor’s Version) through Republic Records, almost 13 years after the launch of her multi-awarded second studio album Fearless. The re-recording consists of 27 tracks; all of the 19 songs from the platinum edition of Fearless, an Elvira remix of “Love Story,” the 2010 soundtrack single “Today Was a Fairytale,” and six previously-unreleased "From the Vault” tracks.

Following the feud last year with her former label owner Scott Borchetta of Big Machine Label Group and American entrepreneur and talent manager Scooter Braun, Swift announced that she would re-record all of her first six albums, including Fearless. While it is now an entirely different world from its initial release, Swift’s songs remind everyone of nostalgic memories, giving people an express trip down memory lane.

Flashback to 2008, when things were simpler and days were brighter. Taylor Swift’s music is playing loudly on the radio. “You Belong With Me” is the anthem of every unrequited lover, “White Horse” mourns those suffering from heartbreak, and the titular track “Fearless” is the song you raise your hairbrush to while dancing in front of the mirror.

The massive success of Fearless earned Swift her first “Album of the Year” at the 2010 Grammys, becoming the youngest recipient of the award before Billie Eilish in 2020. Fresh from a break-up with American singer-songwriter Joe Jonas in 2008, Fearless revolves around falling in love, grief, growing up, and ultimately, moving on. Furthermore, fans are delighted with the additional “From the Vault” tracks, with Swift having collaborated with Australian singer-songwriter Keith Urban and American singer Maren Morris.

The album rollout began with the release of “Love Story (Taylor’s Version)” last February 12. The release also included a lyric video, which captured the moments of her 2008 Fearless era with her fans. Moreover, “Love Story” is not just about a romantic relationship with a significant other, as fans have speculated. Rather, it’s Swift’s ode to her love affair with her fans—the Romeo to her Juliet.

What stands out the most in the re-recorded songs is Swift’s more mature and slightly deeper vocals. Compared to her younger self, Swift’s reedy voice has clearly evolved.

Fearless (Taylor’s Version) is still backed up by Swift’s touring band. She even brought back American singer-songwriter Colbie Caillat to redo her backing vocals in “Breathe.” It is evident that she did not alter much from the album, aside from ad-libs like the giggle in “Hey Stephen (Taylor’s Version)” and “Love Story (Taylor’s Version).” It might have been almost tempting for the pop star to alter the pop-country arrangement of the album or some of the lyrics, like her frequent “rain” metaphors scattered across her tracks. However, the charm of the album lies in its simplicity, and an 18-year old Taylor Swift wanting to tell her stories through her songs.

While Fearless isn’t her debut album, it is where her songwriting skills truly came to light. Aside from the catchy melodies of her songs, what resonated with her fans is how she also sang about their experiences. Her wistful reminiscence in “Fifteen” where she sings, “When you’re 15, feeling like there’s nothing to figure out…this is life before you know who you’re going to be,” is a testament to what is now known as her highly-regarded musical prowess.

There is no topping “Love Story,” with that romantic prom dress saga, but songs from “From the Vault” are also to be recognized. There are parallelisms from the six new songs that hint at Swift’s other songs. While “Mr. Perfectly Fine” sings about a man who is highly full of himself, the phrase “casually cruel” mirrors the fan-favorite Red album track “All Too Well.” Aside from this, “You All Over Me” also has the same metaphors from the 1989 album track “Clean.”

A punch to the gut

Fearless (Taylor’s Version) is not only for the fans celebrating the definitive version of Swift’s award-winning album, but it is also a celebration of Swift’s triumph over her bullies—Braun and Borchetta. In her seventh studio album Lover, the first project she completely owns the master recordings for, Swift even dedicated a song for them called “The Man,” singing how she is sick of “running as fast as she can” and of them [bullies] coming at her.

Flashback to June 2019, Braun bought Swift’s former label, Big Machine Records, along with the master recordings of her first six albums. According to Swift, despite heavy efforts, she was never given the opportunity to buy her masters. After this, Braun sold her masters to private equity firm Shamrock Capital for $300 million. Swift went to Twitter saying, “This was the second time my music had been sold without my knowledge.” Moreover, Swift claims that Braun’s team wanted her to sign documents that stated she would never say anything about Braun unless it is positive, a move that would “silence her forever.”

Swift re-recording her masters, starting with Fearless, does not only emanate with her as an artist but to others in the industry as well. For one, Australian artist Toni Watson (Tones and I) broke records in the UK with her song “Dance Monkey,” retaining her rights on signing. New generation labels such as BMG (Bertelsmann Music Group) and AWAL also offer deals where rights return to artists after a few years.

Ownership means musicians receive greater shares of streaming revenues, which remain controversially low. In fact, Spotify, one of the leading music platforms, reported profits for the first time since 2019, yet they continue to underpay artists. Swift is at the forefront of fighting against the injustices faced by artists all over the world.

Swift’s fight against her bullies empowers artists so they won’t go through the same corporate abuse she’s experienced, such as having to re-record past masters to gain ownership. To quote from “You All Over Me” featuring Morris, “I lived and I learned.”

With her battle against Braun and Borchetta in mind, the song “Change”  hits differently after all these years. She initially wrote it about the early beginnings of her former label, Big Machine. But she finished the song after seeing label boss Borchetta in tears when she won her first Country Music Association (CMA) for New Artist of the Year in 2007. This song reflects Big Machine’s journey, singing “the battle was long... we’ll stand up champions tonight.” But after all that irony, what would Swift do? She’ll sing “hallelujah.”

Fans see Fearless as their diaries, written and sung by one of the world’s biggest stars. It is a perfectly constructed narrative of a teenage girl who’s experiencing things for the first time. Swift undeniably poured her heart and soul into this album. With a sense of nostalgia, these songs are there to remind you of what you felt during that exact moment perfectly. Having your first kiss, meeting someone for the first time, and even the wounds that someone special gave you when they left.

Now in her early 30s, it’s interesting to hear Swift sing lyrics from a youthful perspective. But more importantly, it’s heartwarming to see how fans all over the world grew up with her romantic and picturesque lyrics. Alongside her musical maturity are fans who are always eager to hear her share her stories.

While it has been a grueling year for most people, the hardworking artist continues to strive and provide fans all around the world with music that helps them get through their quarantine blues. Swift is a living icon who continues to transcend boundaries and millions of listeners’ mirrors to their inner selves.

Fearlessly and sincerely, she has delivered a masterpiece that is one for the books. Not only did she remind the world of what her 18-year-old self went through, but she also nudged a memory at the farthest corners of everyone’s minds, reminiscing things that happened 13 years ago, and realizing how much we grew and learned.