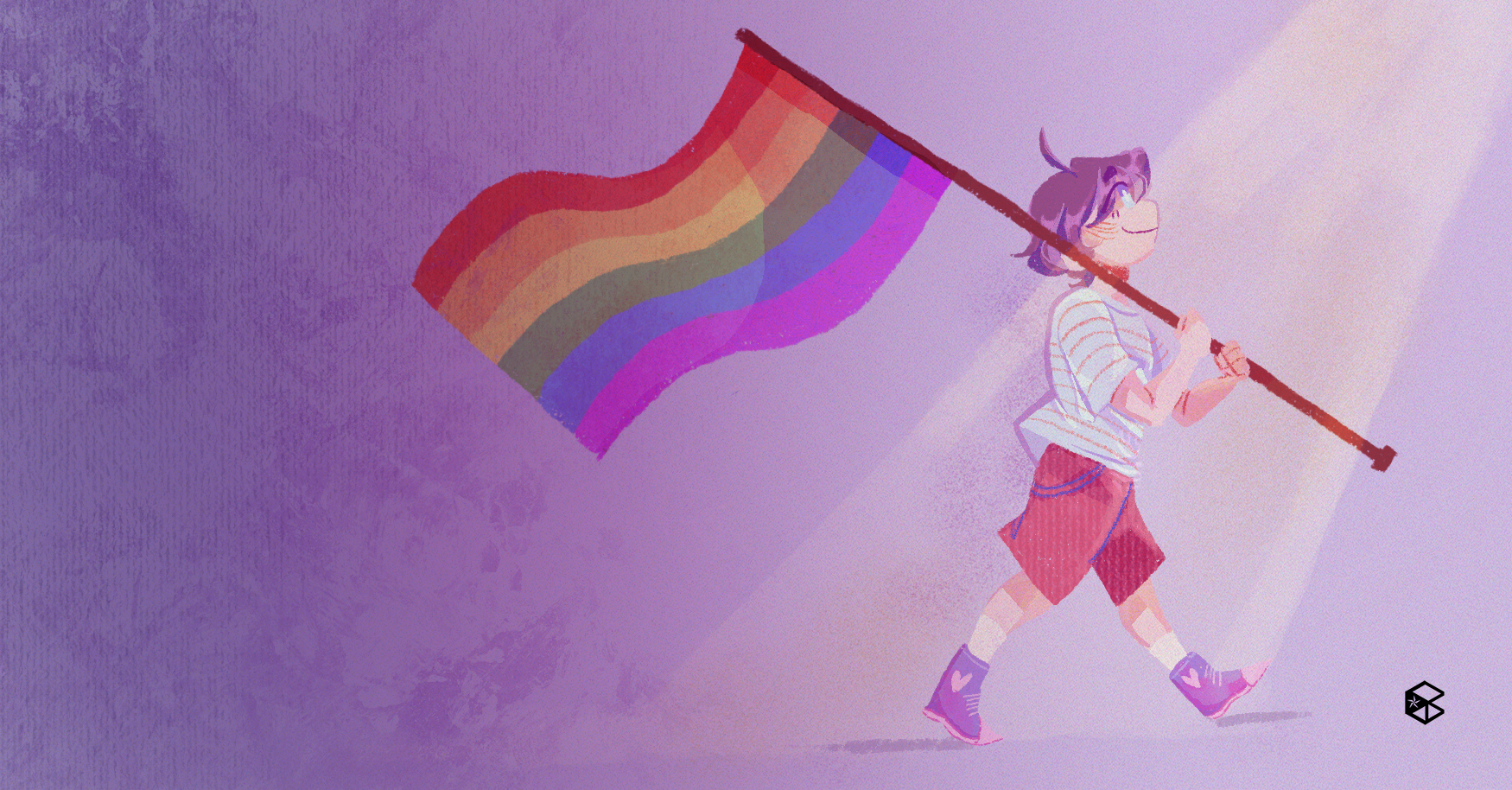 What Pride really stands for

Fear of rejection from society, friends, and family is only the tip of the iceberg of what the LGBTQIA+ community endures while they wait for complete liberation. Their desire to be honest with their identity is being suffocated with the fear of meeting death. How can we turn a blind eye towards this? We all live in this reality: the reality where you can be killed simply for loving someone of the same sex.


It’s been 52 years since the first gay riot back in June 28, 1969 at Stonewall Inn. After years of being shoved, abused and jailed because of “inappropriate” gender clothing and gay behavior in public, the agitated community fought back. The tension lasted for more than five days. Day by day, hundreds to thousands of LGBTQIA+ flocked the front of Stonewall Inn, Christopher Street, and its nearby places to protest. African American activist and trans woman Marsha P. Johnson was one of the key figures who resisted arrest and led the fight for gay rights.

What is the true purpose of Pride Month?

Last May 23, three men admitted to the gruesome rape-slay on transman Ebeng Mayor. Mayor was out drinking with the three suspects on the night of May 17 when one of them had punched him, and carried him to a vacant lot to take advantage of him. When he regained consciousness, they hit his head with a rock. Afterwards, they allegedly impaled a wooden stick into his genitals and hit him again, causing his skull to be crushed. Part of the investigation is to determine whether this was another hate crime. As of writing, there is still no decision.

Meanwhile, in September 2019, transwoman Jessa Remiendo was brutally killed in Pangasinan with a slit on her neck and eyes. Likewise, Pampanga’s Miss Teen Gay 2014, Jaja Canlas, died with multiple stab wounds, while her body was inhumanely dumped on a pig farm. In October 2014, Jennifer Laude was found dead in a bathroom at a motel with her neck blackened with strangulation marks. A few weeks after the release of Laude’s murderer, American Marine Lance Corporal Joseph Scott Pemberton, transwoman Donna Nierra was found dead in a river at Caloocan City. The long list of names continues as the perennial fight for anti-discimination for the LGBTQIA+ is still being wrongly branded as “special rights.”

But how can you call it "special rights" if everyone has SOGIE?

The LGBTQIA+ community does not ask for any special treatment. They ask for equality. Equal rights that all of us deserve. And, while others are too preoccupied with feeding the flames of judging others by their SOGIE, there is someone out there whose fear is far greater than just online bullying—but being killed just for being their true authentic selves.

We do have laws, but it isn’t enough

Although our newsfeeds have been flooded with cases of hate crimes against LGBTQIA+, these cases remain undervalued. Transgender Europe’s Trans Murder Monitoring reported murder cases of more than 50 transgender people in the Philippines since 2010 which resembles only a portion of the real total cases due to various unreported ones.

“We have so many [people] who tell us there was this transwoman who was found dead in some street, in some province, and there’s nobody who cares about her so that case doesn’t get reported,” co-founder and executive director of transgender rights organization GANDA Filipinas, Naomi Fontanos, stated.

LGBTQIA+ themselves refrain from filing a case to the police out of mistrust. Cases of denial of assistance, improper detainment in prison cells (i.e. transwomen are placed in male cells), verbal discrimination, and extrortion were faced by the Community in a 2016 report of Ging Cristobal, lesbian feminist activist and project coordinator of human rights group OutRight Action International.

“No one wants to file a complaint against police because they can’t trust [that the] police will conduct an investigation against co-police officers, so impunity happens,” said Cristobal.

Philippine National Police Reform and Reorganization Act of 1998 (RA 8551) established “LGBT desks” in police stations nationwide, which seek to attend to cases involving LGBTQIA+. Although this began in 2018, cases of abuse of power and impunity have been vividly seen among the ranks of officers in position.

The disregard to the plight of the LGBTQIA+ community is also tagged on the allegedly illegal arrest of the 20 members of the community during the PRIDE March at Mendiola when, according to Bahaghari National Spokesperson Rey Valmores-Salinas, they were following safety measures and social distancing.

In an interview with The Benildean for the magazine-journal The Benildean: Translate, Ms. Valmores-Salinas said, “The people in power want to silence those who dare to criticize them at all costs—and more so when the person speaking out is, of all people, a transgender woman.”

Meanwhile, Pastor Michael Jason Masaganda of the inclusive Metropolitan Community Church of Marikina, shared that there are many “long forgotten cases” of the LGBTQIA+ community. Moreover, he had low hopes that the police would resolve the recent cases of the community. “It’s like they don’t bother,” he added.

It’s high time that the SOGIE Bill is implemented. Not only are innocent lives being exchanged for prolonging the approval of the bill, but discrimination and bullying is detrimental to their mental health.

There are still workplaces who fail to acknowledge that transwomen and transmen are women and men, respectively, through misgendering dress codes and names. Some trans people still have to use the Persons with Disability (PWD) restrooms, if not the gender-based restrooms they identify with. “Napapaisip ako: Is this a disability? Is there something wrong with being who I am? I’m just being me–me! A transwoman. Pero bakit when they look at me, para bang may disability ako?” transwoman employee Margaux Romero shared.

In 2018, The Philippine LBGT Chamber of Commerce’s Corporate SOGIE Diversity & Inclusiveness Index reported that 0 out of 100 of the Philippine-based companies  have SOGIE-inclusive policies. On top of this, they have a 27.9% chance of experiencing “harassment, bullying or discrimination due to SOGIE or intersex status” in the workplace, based on a 2018 United Nations systematic study. Meanwhile, some fear employment rejection because they are members of the LGBTQIA+ Community.

Even at a young age, the LGBTQIA+ youth may experience anxiety and depression from physical bullying, as severe as punching and pushing, and verbal bullying from their professors and schoolmates. These effects due to the lack of strict implementation on national anti-bullying policies, including Child Protection Policy (2012) and Anti-Bullying Act of 2013, are linked to suicide.

This is how you support Pride

Two decades have passed, yet the hate crimes and discrimination seem to have not reached the benighted paradigms of some government officials. The now called  "SOGIESC-based Anti-Discrimination" bill, which prohibits gender-based marginalization and violence, still  remains in the Senate after it was reintroduced by Senator Risa Hontiveros last December 2020.

Time and time again, we were reminded how SOGIE involves everyone. Everyone has a sexual orientation, gender identity and expression. However, the difference comes in the privilege of acceptance, present in the long-standing gender normalized by society, man and woman. People who identify themselves as otherwise are being prejudiced, and discriminated against.

As the first transgender national politician and Bataan District Representative Geraldine Roman stated in her first speech in Congress, “Recognizing [LGBTQIA+] rights and dignity will in no way diminish yours… We are not asking for special privileges or extra rights. We simply ask for equality.”

Don’t just join the parade, march with the LGBTQIA+ community by amplifying their voices to raise their plight at a higher level—and this, this is how you support the LGBQTIA+ community.