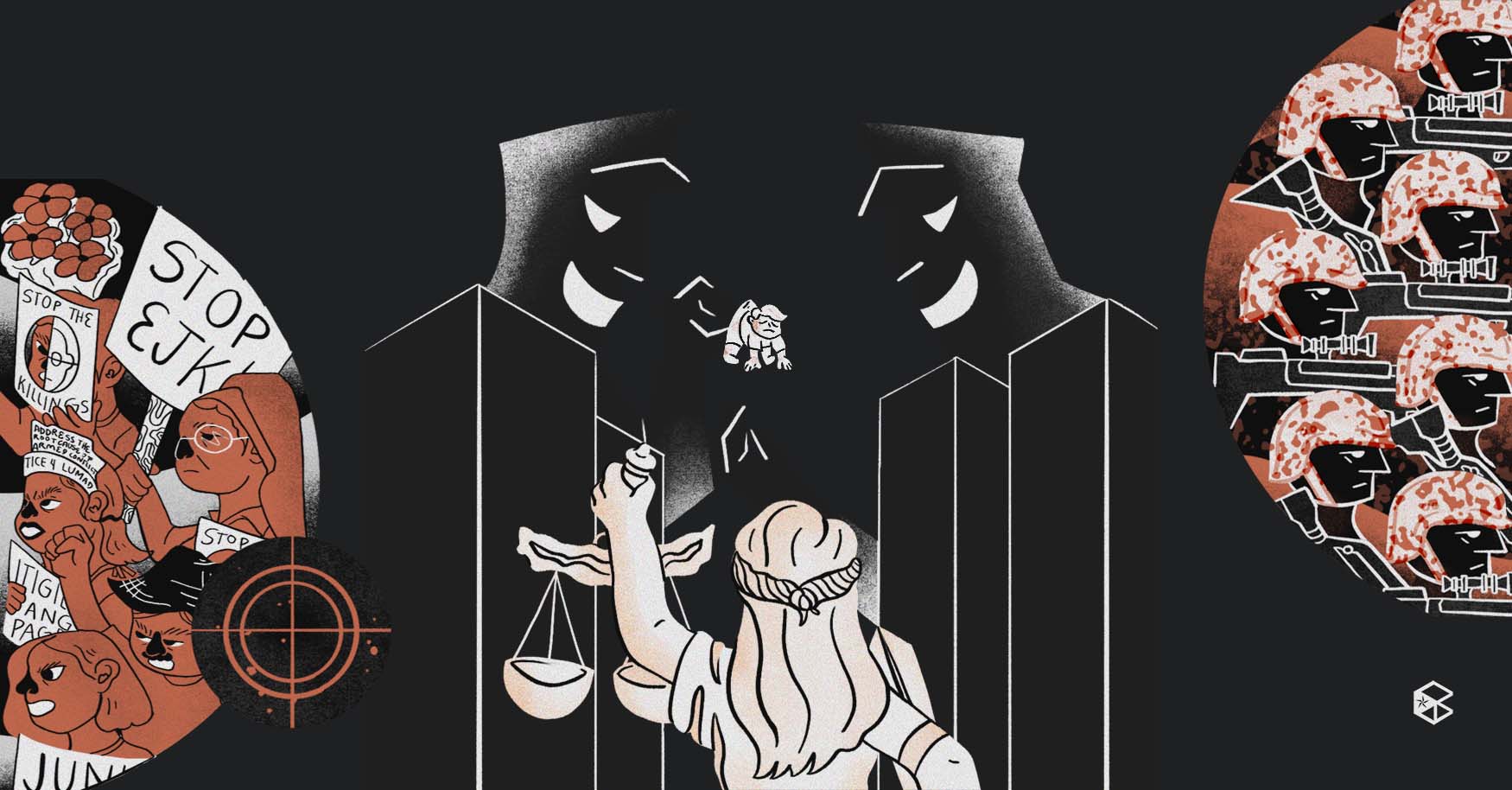 Without due process, who are the so-called “enemies” of the State?

How will attacks against the public end if the administration keeps feeding the flames of violence with injustice?

President Rodrigo Duterte argued that his infamous “War on Drugs'' was implemented for the Philippines to be safer—free of drug lords, addicts, and pushers. However, the method for such a campaign proved to be violent and arguably inhumane. Five years into his presidency, a culture of merciless killing and ignorance of basic human rights has been seemingly embedded into our nation’s psyche. Without due process to guide these actions, including red-tagging, the country is at the verge of democratic decay.


More than a year in the COVID-19 pandemic, all the more must the focus be on saving lives. This is why the bombing, assassination, ambush and other violent attacks of identified terrorist groups by the United States and European Union, such as the Communist Party of the Philippines - New People’s Army (CPP-NPA), are downright unacceptable.

In a statement to the United Nations (UN) by National Security Adviser Hermogenes C. Esperon, Jr., he claimed the CPP-NPA killed around 10,000 soldiers, policemen and civilians between 1969 to 2018. Continuing up to date, it is considered as the “longest-running and most brutal communist insurgency in Asia,” lasting for about 50 years.

Indeed, the Philippines must have counter-insurgency campaigns at the forefront of the war against terrorism. Currently, this includes the infamous “red-tagging” or, as defined by the Supreme Court, the act of labeling and accusing individuals or organizations as communists or terrorists. Even without sufficient documentary evidence and credible investigations, law enforcement agencies and military officials use this as a strategy against insurgency.

Moreover, Presidential Spokesperson Harry Roque emphasized that “there is no overall communication plan on red-tagging,” leaving the operations in the hands of defense establishments.

The National Task Force to End Local Communist Armed Conflict (NTF-ELCAC), with its spokesperson Lt. Gen. Antonio Parlade Jr., who was reported by the Senate for red-tagging with unverified information, spearheads the approach in dealing with communist and terrorist groups.

Hitting the target with insufficient evidence

Last March 13, the nine slain activists—alleged to be members of the NPA according to the Philipine National Police (PNP)—were proven by the Department of Justice (DOJ) to be “members of cause-oriented groups carrying out legitimate dissent.” The evidence found by DOJ slammed the claims of PNP, who must now face investigation, and file an affidavit in relation to their police operations.

Some human rights lawyers and other party-list members have questioned the credibility of these allegations after being red-tagged as communists, and urged the military officials to file a case and present sufficient evidence in court, the only branch of government that can legally interpret law violations.

Without due process of law, the authenticity of these accusations remains questionable, therefore, unfair. More so, the Armed Forces of the Philippines (AFP) Information Exchange admitted and apologized for their “inconsistencies” in the list of students who were red-tagged as members of the NPA.

Being in “the list” per se endangers one’s life; strongly validating the need for the rights related to fair trial, arrest and detention. Its capacity to take the life, harass, and arrest innocent civilians is a threat to public safety. As the UN emphasized, the Philippines need “independent, impartial, credible investigations into all allegations of serious violations of human rights.”

Persisting the calls for prejudice

Despite the lack of prudence of police-military forces in terms of boldly condemning alleged “terrorists” in their lists, or red-tagging individuals expressing dissent, the campaign or militaristic strategy persists. Between 2015 to 2019, 248 human rights defenders, trade unionists, journalists, and lawyers were killed, in relation to their work, as documented by the UN Human Rights Office.

The absence of due process of law in the orders of President Duterte had been apparent since pre-pandemic times. Extrajudicial killings have flooded the country with a striking number of more than 8,663 deaths of alleged illegal drug-related crime perpetrators since July 2016. Some of which were wrongly accused.

Cases in relation to abuse of power, such as policemen convicted of planting evidence and firearms, and acts of murder, were not enough to spark change in the system. The Anti-Terrorism Law (ATL) had been passed which seemingly disregarded the weight of the innocent lives who died defenselessly—deprived of their right to defend themselves in court.

Human rights lawyers reiterated that some provisions of ATL are a threat to our freedom of speech and expression, right to due process, and freedom of assembly. It has the potential to be weaponized by abusive authorities to do warrantless arrests to those deemed fit in its legally debated definition of “terrorist,” and detain those arrested for far more than what is stated in the Constitution.

Furthermore, it emboldens police-military forces to continue red-tagging as its counter-insurgency strategy against those deemed to be “threats” or “enemies of the State.”

Saving lives at the expense of human rights

At the core of the implementation of red-tagging and anti-illegal drugs campaigns by the Duterte administration lies the purpose of ensuring public safety. While there were criminals brought to justice, there had been innocent lives brutality taken due to false accusations and allegations.

If the government had proceeded with equal protection and due process of law, or the right to an impartial public trial—which they guaranteed as accessible in a response to the UN dated September 2020—there may have been less casualties.

With less access to justice, fear had been imposed in society, particularly upon witnesses, journalists, family members, and lawyers.

In the pursuit of saving lives, ironically, these campaigns had been implemented at the expense of due process rights, human rights, and notably, the lives of those who were told to be protected.