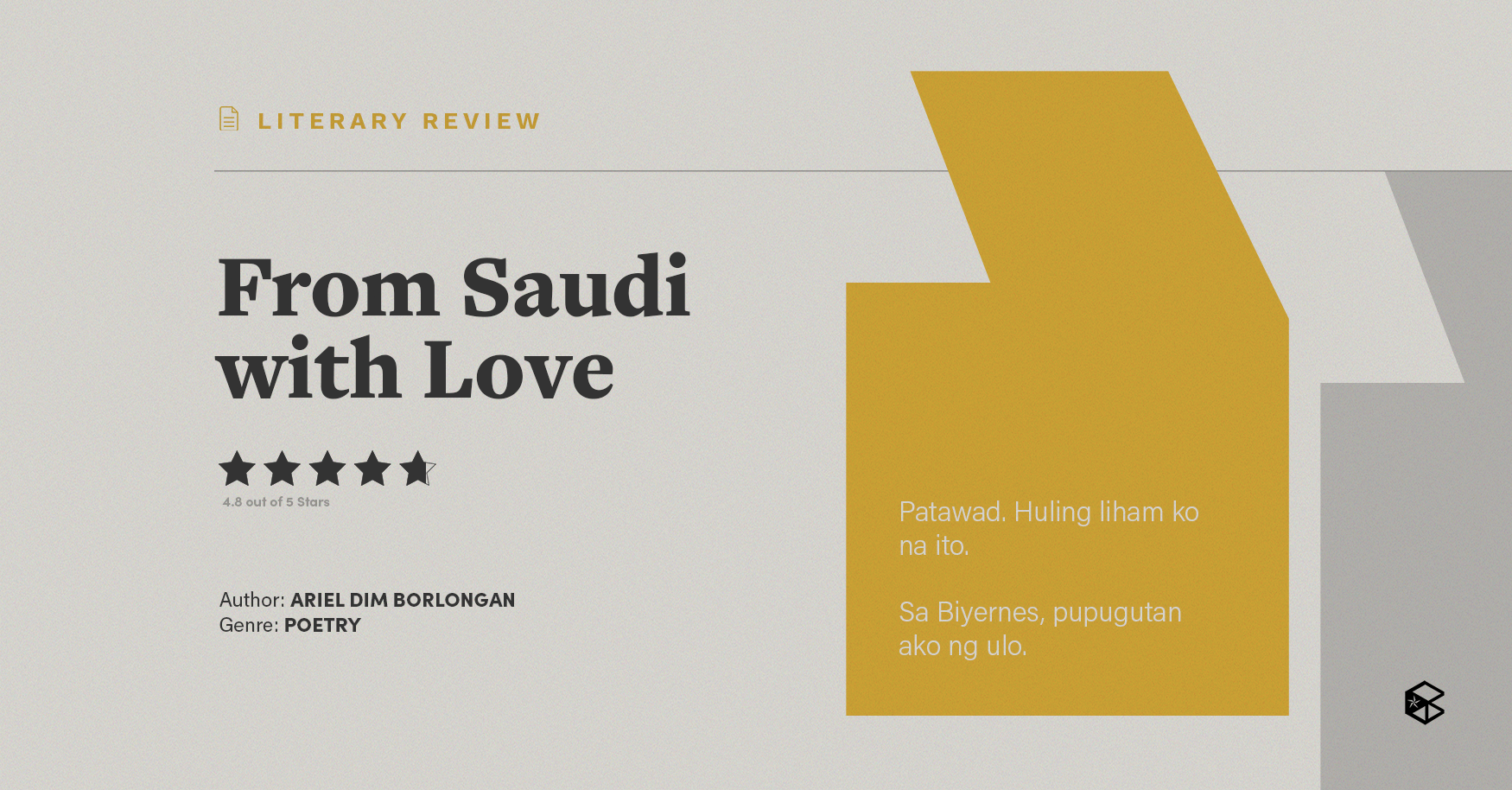 From Saudi with Love: An unanswered letter

Distance has always been a constant.

With the prevalent number of Filipinos working abroad, multi-awarded poet and journalist Ariel Borlongan’s From Saudi with Love reflects the growing distance between an OFW parent and their family back home.

Overseas Filipino Workers (OFW) have been commonplace in the Philippines since the term was first coined, with many Filipinos having family members who are OFWs, or at the very least, personally knowing someone who is one. Borlongan is known for his poetry reflecting on the plight of the working class, the oppressed, and the marginalized. Through this poem, he highlights their struggles with simply staying connected to their loved ones.

At first glance, the poem appears to be a sentimental letter of “pangungumusta” of an OFW from Saudi afflicted by recollection of home, family, and his wife. The poem begins with the narrator reminiscing heartwarming memories and sending regards to his family left behind. The poem then drastically shifts its tone, emanating a sense of dread. Despite the subtle choice of words, the lines paint the dramatic conflict of a father who misses his family; who then reveals a forbidden affair aroused by loneliness.

The mood transitions from melancholic to tragic, ending with: “sa Biyernes, pupugutan ako ng ulo.” The bluntness of this line is opposite to the gravity of the committed crime—adultery. This is because Saudi is known for strict penalties on illegal possesion and use of drug and alcohol, homosexuality, rape, murder, or terrorism offenses. These crimes often always lead to death penalty.

This also acts as a reference to known cases of OFWs sentenced with capital punishment, such as the execution of Flor Contemplacion in Singapore for murdering a Filipina maid and her employer’s son, and Mary Jane Veloso, who is still on death row,  for drug smuggling. In both cases, they confessed to doing the crimes however only due to duress. That said, this also reflects on the negligence from the Philippine government in terms of protecting our OFWs.

As the father reaches his final days, the letter immortalizes his grief and remorse, in hopes of forgiveness too late to accept despite the hopeful nostalgia conveyed at the beginning of the poem.

Moverover, what is commendable with this poem is the way Borlongan wrote it similar to a conversational letter. Yet, his playful words still stand out in the narrative for each line has a distinct rhythm. This can be observed with his use of alliteration of the sound of letter “K.” For instance, “Kumusta na minamahal kong kabiyak, Kumusta na si Kumpareng Serapio? Kumagat siya sa kumalat na tsismis, Na kumaliwa ang kanyang misis, Kaya nag kunwari siyang tinotoyo.”

Overall, the poem is about love and reconnection, yet also serves as a final goodbye where no flights could take him back home. Filipino immigrants endure the ordeals that a valiant overseas worker signed up for: the troubles of work while at the mercy of their employer and foreign laws.

In the middle of the poem, the narrator asks, “...teka nga muna, mahal, ano’t dumalang ang iyong liham?” With that, it can be observed here that most of the time, this longing is unanswered since there is an instability that was created due to the distance.

Perhaps the most chilling part of the poem is not the ending but the normalcy of this issue in today’s society. The disheartening lengths Filipinos have to go to raise their family out of poverty can lead to an impairing of bond within a marriage or within a family.

If you wish to read From Saudi with Love, the poem can be found here.

Tags: LITRAIL
Tweets by TheBenildean
Printed from http://localhost:3000 on 23 September 2021