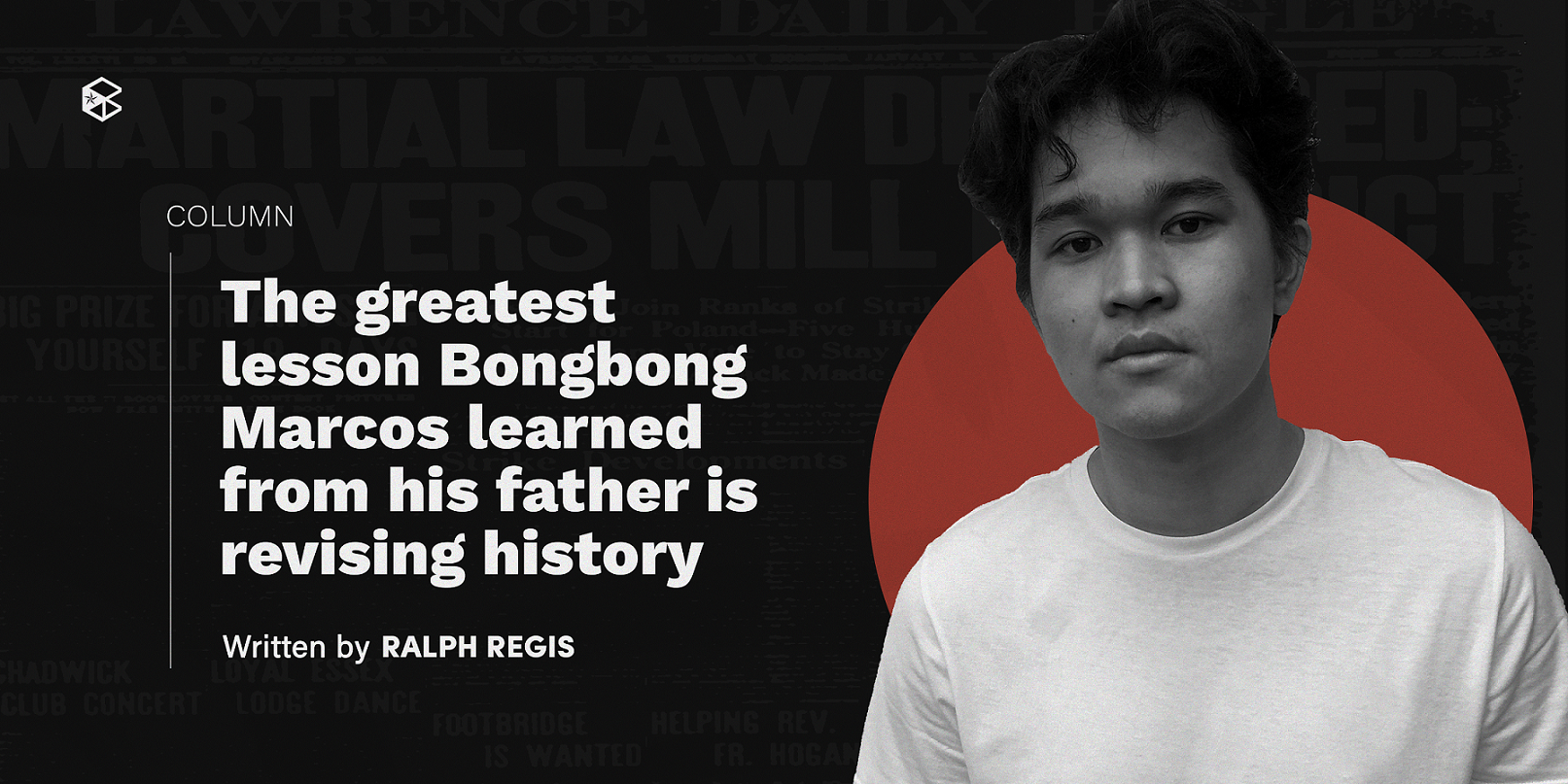 And the root of evil continues with the spread of fake news and lies—along with a splash of historical revisionism all over.

To begin with, people like Marcos shouldn’t be given platforms to spread lies and fake news. But as the goddaughter of Marcos, Gonzaga would definitely give him such an opportunity. The desire of conditioning the mindset of the people in search for fabricated truth is what the Marcos family has and still continues to do.

An interview with a fraud

The interview speaks so much of glorifying and humanizing the Marcos family, through the eyes of the former senator and son of the late dictator. Yes, they’re humans, but you should never get over the fact that amidst all the smiles and waves comes the tragedy that left around 70,000 people imprisoned, 34,000 tortured, and 3,240 killed from 1972 to 1981, according to Amnesty International.

There is still the Marcos family's desperation for sympathy from the people. With Gonzaga focusing on the beautification of the family’s image in the interview, much can be said about the cheap and downright absurdity of false narratives.

“You got a lot of his traits because you grew up watching him, sa stage giving speeches. So, marami sa mannerisms niya, even sa size, nakuha niyo,” says Gonzaga when commenting on the similarities between Marcos and his father and former dictator Ferdinand Marcos Sr.

One thing’s for sure, Bongbong Marcos, like his father, desired for power time and time again. For over four years since his loss for vice presidency, Marcos pleaded in protest for a recount against eventual winner Vice President Leni Robredo. In a unanimous vote last Feb. 16, 2021, the Supreme Court junked Marcos’ four-year protest. To quote Thanos, “You could not live with your own failure,” and it sure did lead Marcos back to the rabbit hole of defeat and shame.

During the latter years nearing the end of the Marcos regime, the dictator was severely ill. Thus, the son painted his father as a sympathetic villain who’s vulnerable and weak. He even cited his father being a “health freak,” exercising an hour a day.

But hiding the former President’s declining health “debunked” the rumors of any serious illnesses, and painted them as simply cases of flu or fatigue. It was in 1985 when the illness was disclosed as systemic lupus erythematosus, according to intelligence and congressional sources.

Gonzaga further asked Marcos the best and worst qualities he could think of his father. Marcos stated that his father was an actual leader, with a clear vision for the country that strived for betterment of society, and took his job seriously. I believe the right statement is that he took his job way too seriously.

The search for power eventually corrupted the mind of a supposed “actual leader.” So, once again, it’s downright absurd to paint a former dictator an actual leader when in fact, being a leader listens to the people around them and doesn’t take constructive criticism as an attack.

But maybe we should give Marcos the benefit of the doubt, that he might mention the negative aspects of his father. But nope, nada, zilch! This comes to show that even with a short interview, Marcos conditions the people of how “good” his father was during his reign.

On the other side of the spectrum, Gonzaga asked Marcos how he and his family handled the bashers such as the anti-Marcoses. At a young age, Marcos recalled seeing newspapers with the headlines ‘Oust Marcos!’ or ‘Out Marcos, Out!’ Right then and there, he was conditioned to believe that it’s all a bunch of naysayers and haters. He had to live up to the family name and by the looks of it, he had no regrets in choosing to continue his family’s lies.

Were they, the Marcoses, put on this earth to serve? Absolutely not. If by definition your service is trying to revise our history just to please your egos and “preserve” the family name, then you’re giving no one a favor, except for your Marcos loyalist fan club.

It really is a mistake giving the Marcoses a return to the political spotlight with his sister Imee Marcos recently filling a senatorial spot in the 2019 Philippine Senate elections.

Towards the final minutes of the interview, Gonzaga asked about what Marcos is tired of hearing in opposition to his family, “Lies. I'm really tired of hearing lies that have already been disproven, not necessarily about my family, about me [...] Some people have the idea that if you repeat a lie often enough, it becomes the truth,” says Marcos. I honestly believe that he’s talking about himself in this statement. It’s clearly something that his family likes to do.

There is the Marcos family’s persistent denial of the ill-gotten wealth, as well as x the human rights violations and corruption during the Marcos administration. But the loyalist minions of the family continue to spread these revisionist ideals faster than you can say Jack Robinson.

There’s a great need in debunking Marcos’ blatant lies. So, head over to the digitally curated Martial Law Museum, an online learning resource that aims to historically inform us about a tragic past in our nation.

On the other hand, Gonzaga sparked another viral and controversial bomb with the recent guesting of Filipino boxer and politician Senator Manny Pacquiao, just hours until the announcement that he would run for president in the forthcoming presidential elections. Seems a little suspicious that the episode is titled “Why Manny Pacquiao Is Running For President.” It's safe to say Gonzaga knew his decision all along. In the interview, Pacquiao vowed to punch the Philippines way out of the massive corruption rampant in the country.

But let’s not forget his statement during the 2016 Philippine presidential election campaign period that the LGBTQIA+ community is far worse than animals. Is this the type of president the Philippines would elect? If Pacquiao’s notorious absences in the senate is an indication for his competency, then why would the Philippines need to elect a leader such as him?

So this is a constant reminder to #RegistertoVote! There’s only nine fast-approaching days left before the voter’s registration deadline on Sept. 30. As of right now, the Commission on Elections (COMELEC) hasn’t issued an extension. Your vote definitely matters come the 2022 Philippine elections.