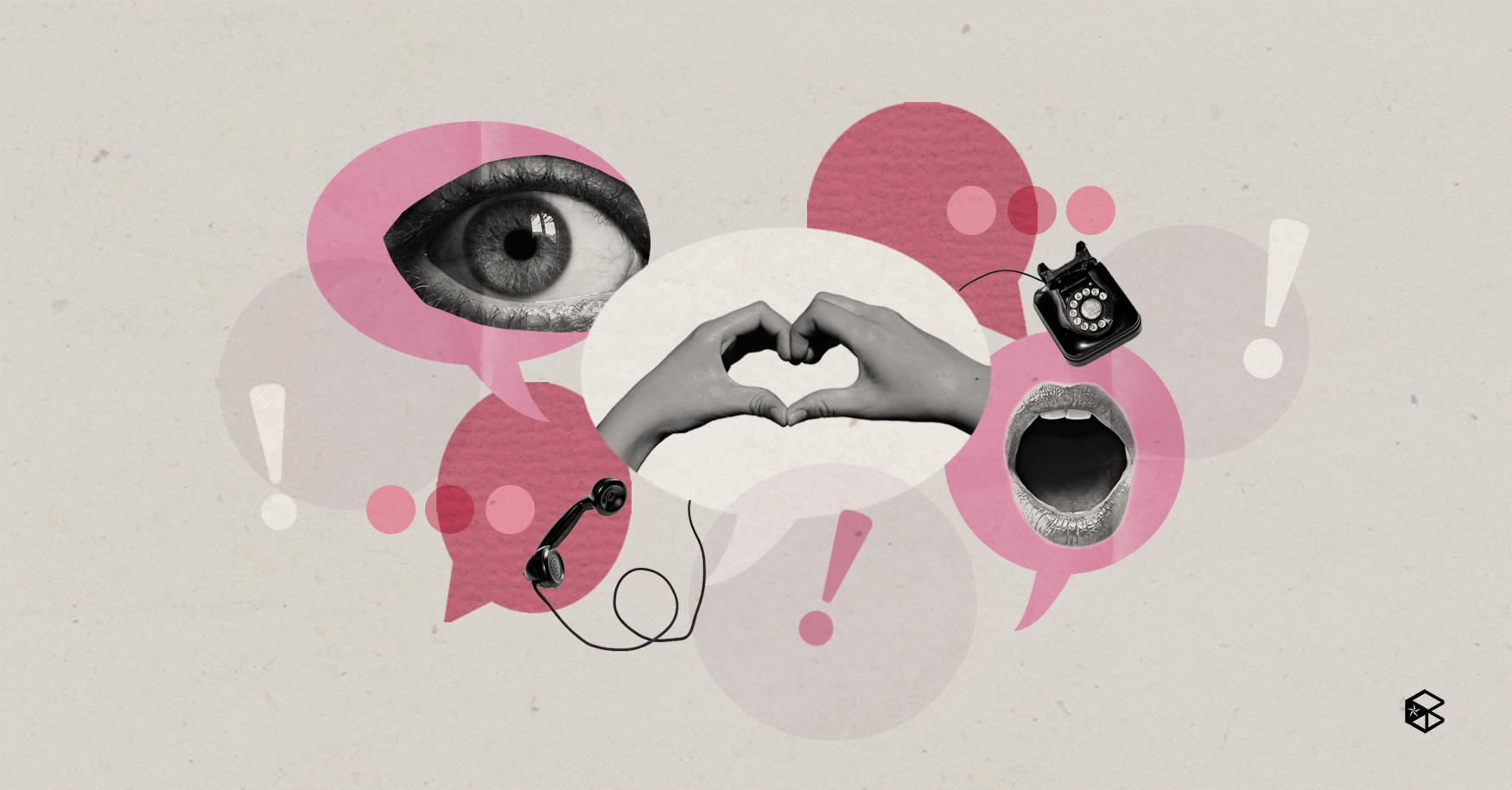 Same love is great love: A conversation with lesbian Benildeans

In celebration of International Lesbian Day, these lesbian Benildeans shared their stories of sexuality and identities.

Celebrated annually on Oct. 8, International Lesbian Day is an awareness day for lesbian history, culture, and identity. This very special day gives an opportunity for lesbian women all around the world to connect and raise awareness about the importance of a community.

“It’s the need for lesbians to achieve higher goals to become worthy of respect. It’s only then that people will stop shaming you for who you are.”

In an interview with The Benildean, ID 118 film student Allen Sandoval shared they had the privilege and freedom to explore their sexuality, “[But] what came with it was years of enduring that perspective of ‘inferiority’ and ‘sinfulness’ coming from a lot of places. I don’t know how exactly I was able to brave past that. I believe my family subtly braving those discriminations with me helped as well.”

In the process, Allen always knew the things they liked and did not like such as strictly avoiding pinks, Barbie, and dresses. “Deep down as well, I was scared to live in a society that made me feel like I had no place in it. But if just one person held me and told me I belonged, that I could stay, that was all I needed, to know that I am seen, accepted, loved, and understood,” they added.

When people think lesbians can revert into being straight again if they try to date or flirt more with men is what gets on Allen’s nerves. They shared that this also applies with gay men who have a strict preference towards the same sex.

“Could you imagine if the gay community just approached the straights and applied the same logic? ‘You’re only straight [because] you haven’t tried dating the same sex yet! Try it!’ Rarely, and I mean RARELY do the gays and lesbians force themselves and the homosexual agenda to other people. We learn to respect their boundaries and preferences, so why can’t they do the same for us? It’s all we’re asking for, really, respect for our identities.” they shared.

For Allen, one should strongly assert themselves and never let others paint an identity you didn’t paint yourself. Claim your identities and never let anyone dictate them for you.

Moreover, in the coming out scheme of things, Allen was always openly and fearlessly able to express their sexuality because they never had to come out. They are extremely and incredibly blessed to have a family that allowed them to express themself growing up.

It was painful for Allen to see others curse their family for accepting them, to the point where Allen contemplated on maybe they shouldn’t be gay. “Since this was when I still had plans of coming out, I had a long-term plan to build up to that confession. I’d first be a respectable, honorable gay, lesbian person that will never be looked at with shame or taboo. I toiled to be the best in whatever. I wanted my family to never be disrespected or cursed for having me. The ‘imperfection’ that people kept pointing out would be outweighed by my achievements,” they shared.

When Allen entered a relationship with a girl, they experienced fear and doubt on the limits of their family’s acceptance towards them. “But my family beat me to it, to the coming out bit. They’re the ones who came out to me. I still can’t wrap my head around that. I’ll admit, it was wholesome to see them homely love the first girl I officially introduced to them,” they added.

Growing up in Kuwait, people didn’t, or couldn’t talk openly about topics such as the LGBTQIA+ community, according to Allen. But moving into the Philippines, it was relatively more open.

While the concept of gays is well known, lesbianity is perceived as a concept that secretly arouses people. This is something Allen would like to be further educated at when given the opportunity.

In the Philippines, there is a need for visibility towards the lesbian community. There hasn’t been a fair number of lesbians out in the public, says Allen. Thus, lesbian women who don’t pander to societal standards are immediately referred to as tomboys in Philippine society.

“People enjoy putting personalities to our sexual identities. It’s okay for Vice Ganda to be gay 'cause [they are] funny. It’s okay for Boy Abunda to be gay because he’s smart and respectable. But it’s not okay for Jake Zyrus to be Jake Zyrus because we lost Charice Pempengco,” they shared their plight of society claiming their identities. “When are we going to learn that the worth and value of a person shouldn’t weigh on what they’ve achieved in life?”

With Allen’s openness in speaking more about their sexual identity, it sometimes escapes their head that they’re biologically female, “Things like this have made me love this lifetime decision that I’ve made since I was young. The older I get, the more I realize how challenging yet beautiful this experience is. I’m able to understand both women and men in a way a heterosexual may not be able to, and I love that. I never wanted to become like everyone else. That’s not how I’d like to make a difference to this world,” they added.

“Education is the key. The desire to embrace people for who they are, not who they love. I think once that is covered, the rest will follow.”

ID 118 film student Chloe Margallo shared in an interview with The Benildean that studying in an all-girls school helped in understanding her sexuality better, “I was ‘straight’ when I got into that school but, as soon as I got out of that place, the real me came out too.”

The common misconception she would encounter is that “if you’re a lesbian, you automatically want to be a man, dress up like a man, or look like a man.”

Whenever she encounters these remarks, she would address them by educating and helping them understand it better. But for the stubborn and close-minded, she chooses not to waste her time.

“The coming out process was fortunately easy since I also have relatives who are members of the LGBTQIA+ community. As for my mom, it took a while for her to accept who I am fully, but as soon as she met my girlfriend, she eventually showed her undying support,” she shared.

According to Chloe, it is possible to perceive and analyze lesbianism, marked by a further development from male homosexuality and its invisibility or social exclusion. Lesbians should belong in a space with basic human rights and be treated equally as people.

As the LGBTQIA+ community still suffer from discrimination and rejection, it’s disheartening that it usually starts with one’s own family and friends. “Even if the world is finally accepting the LGBTQIA+ community, it is still evident that some LGBTQIA+ members, like lesbians, still face discrimination, harassment, and hate that results in physical, mental, and emotional harm,” she added.

“To anyone who might be struggling with their sexuality: sit down, drink tea, and just let everything unfold by itself.”

In an interview with The Benildean, ID 118 film student “CC” studied in a co-ed school all her life and only transferred to an all-girls school when she was in senior high school.

She didn’t really discover her sexuality for the reasons people would always assume, “For one, I never really dated anyone or even wanted to go inside the school either. For two years, I was fortunate enough to be surrounded by a lot of like-minded women whom I felt I could be comfortable around, letting go of any sort of suppression I had in me.”

Being in that kind of safe space, it was easier for “CC” to accept and understand who she really was. For that, she will always be grateful for the people and experiences.

As a lesbian woman, she would always encounter the usual question, “So, who's the guy in the relationship?” Although she would receive these as genuine questions from her friends, “CC” would always take the time to answer them thoroughly without taking any offense.

“A lot of people are often fazed by the idea that most lesbian relationships are stripped off of heteronormative experiences. Isn’t it weird to think that in straight relationships, we’re conditioned to expect the most trivial things out of each other like giving flowers, opening doors, and being a decent and respectful human being? These things have been forcibly hardwired into our brains that the concept of two people being in a relationship free of expectations from one another is unfathomable,” she shared.

After “CC” would explain these to her friends, they would start to reevaluate their own relationships in the process.

“CC” has come out to everyone else but her family who is on the homophobic side of the spectrum. Though she shared how her family kind of expected who she really is as she’s always been the type to comfortably express herself.

But right now, she doesn’t want to prove her family right for the wrong reasons and has no interest in coming out to them either. “Like, sure it’s a bit tedious to keep calling my girlfriend my ‘best friend,’ but I found that putting that kind of pressure on myself was unnecessary. I think it’s when I stopped stressing out about it that I became more comfortable with myself. I just live happier minding my own business,” she added.

Saying that being a lesbian in the Philippines is hard is quite an understatement. To this day, it’s sad that the Philippines only know of lesbian women as the “tomboy na may Mio” trope and the ones on adult websites.

“Lesbians are always either the butt of the joke or the ones sexually objectified by men. These harmful perceptions towards queer women are what contributed to the internalized homophobia I’ve had to deal with for years,” she shared.

Furthermore, there isn’t enough proper local representation of lesbian women. “I think the reason we lack representation is that there is this preconceived idea of what lesbian relationships, or lesbians in general, look like,” she shared.

It’s still a hard pill to swallow for some that there are a lot of feminine women in loving and healthy relationships with their fellow feminine women. “It’s actually inconceivable to [other people] that these types of relationships are anything other than sexual. I honestly think we haven’t moved past the grand coming-out/MMK genre aka Love, Simon-esque narratives in the media yet,” she added.