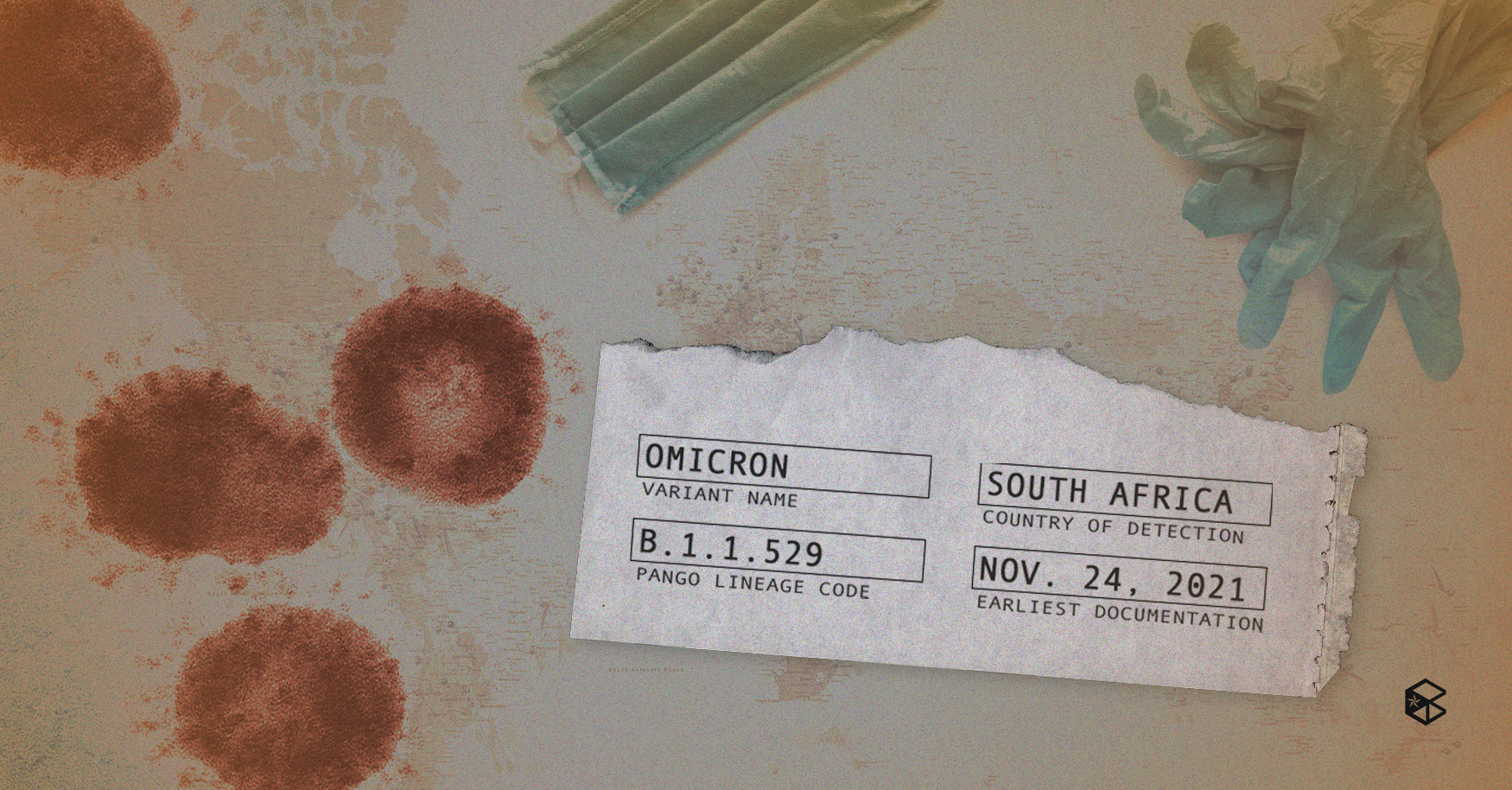 What to know about the new COVID-19 variant ”Omicron”

As the Delta variant continues to cripple several parts of the world, another Variant of Concern enters the picture, and is believed to outcompete other existing COVID-19 variants.

Following the evidence showing several mutations, Omicron, or B.1.1.529, has been classified by the World Health Organization (WHO) as a Variant of Concern (VOC) on Nov. 26. As of writing, cases associated with the said variant were confirmed in at least 42 countries after being first discovered by South Africa as per CNN Philippines.

According to an infectious disease expert, the strain’s behavior draws similarity or even more severe when compared to the highly virulent Delta variant, but further investigations are still being conducted.

Among the five COVID-19 VOCs including Alpha, Beta Gamma, and Delta, researchers assume Omicron as one of the most infectious variants by far after rapidly proliferating to almost seven provinces in South Africa and eventually reaching several countries.

Described as a “highly divergent variant” by WHO, B.1.1.529 is the first VOC to have around 50 mutations, including 26 to 32 mutations in the spike protein–an indication of higher chances for virus transmission, as stressed by Dr. Rontgene Solante, Chief of the Adult Infectious Diseases and Tropical Medicine Unit of San Lazaro Hospital in Manila.

Unlike other existing variants, the possibility of reinfection is higher with Omicron because of the mutations. Hence, people who previously had COVID-19 may or may not be immune to the strain and could be reinfected easily.

Since the Omicron variant had been identified just last Nov. 24, more epidemiologic studies are still conducted to better understand the variant’s nature of transmission and findings will be available to the public once it is ready.

Dr. Angelique Coetzee, Chairperson of the South African Medical Association, described the symptoms as “extremely mild.” According to her, the most predominant symptoms she observed among her patients were severe fatigue for a day or two, followed by a headache and body pain. Some patients also experienced a scratchy throat and inconsistent coughs.

Upon impression, the said symptoms were far from the usual symptoms of patients associated with Delta strain and have more resemblance with the previous variants of COVID-19 as some patients experienced scratchy throat rather than sore throat and loss of taste or smell.

But since the initial observations were taken out from a small number of cases, other symptoms are yet to be identified.

With the huge number of mutations, Dr. Solante explained that vaccines might become significantly weaker against other mutated forms of the virus. Although studies about the nature of the variant and its behavior to existing countermeasures against COVID-19 are still in the works, the current vaccines remain important and effective in reducing the severity of diseases as well as the possibility of death.

As for the diagnostic tests, the polymerase chain reaction (PCR) tests for detecting viruses will still work even with the new variant but the accuracy of rapid antigen detection tests on Omicron is still being confirmed.

To prevent Omicron from spreading further, WHO recommends countries to continue implementing effective public health and safety measures based on risk analysis and science-based approaches. Moreover, the medical system and facilities should be improved to create a stronger response system in case another wave of infections takes place.

Meanwhile, WHO advises everyone to practice the most effective steps to reduce the spread of the COVID-19 virus, namely maintaining social distance, wearing face masks, avoiding crowded and poorly ventilated spaces, regularly washing hands, and getting vaccinated.

While no cases associated with Omicron have been reported in the country as of writing, Philippine Pandemic officials extended travel ban restrictions, covering some countries in Africa as well as several European countries infected with the said variant.

As of Dec. 15, two cases of the Omicron variant have been confirmed by the Department of Health (DOH). The first case was a returning Filipino who arrived from Japan on Dec. 1 while the second case was a Nigerian national who arrived from Nigeria on Nov. 30.

Both results were released on Dec. 7, while it underwent genome sequencing from the Philippine Genome Center on Dec. 14.

DOH said that both travelers are asymptomatic and are currently isolated in a facility managed by the Bureau of Quarantine.