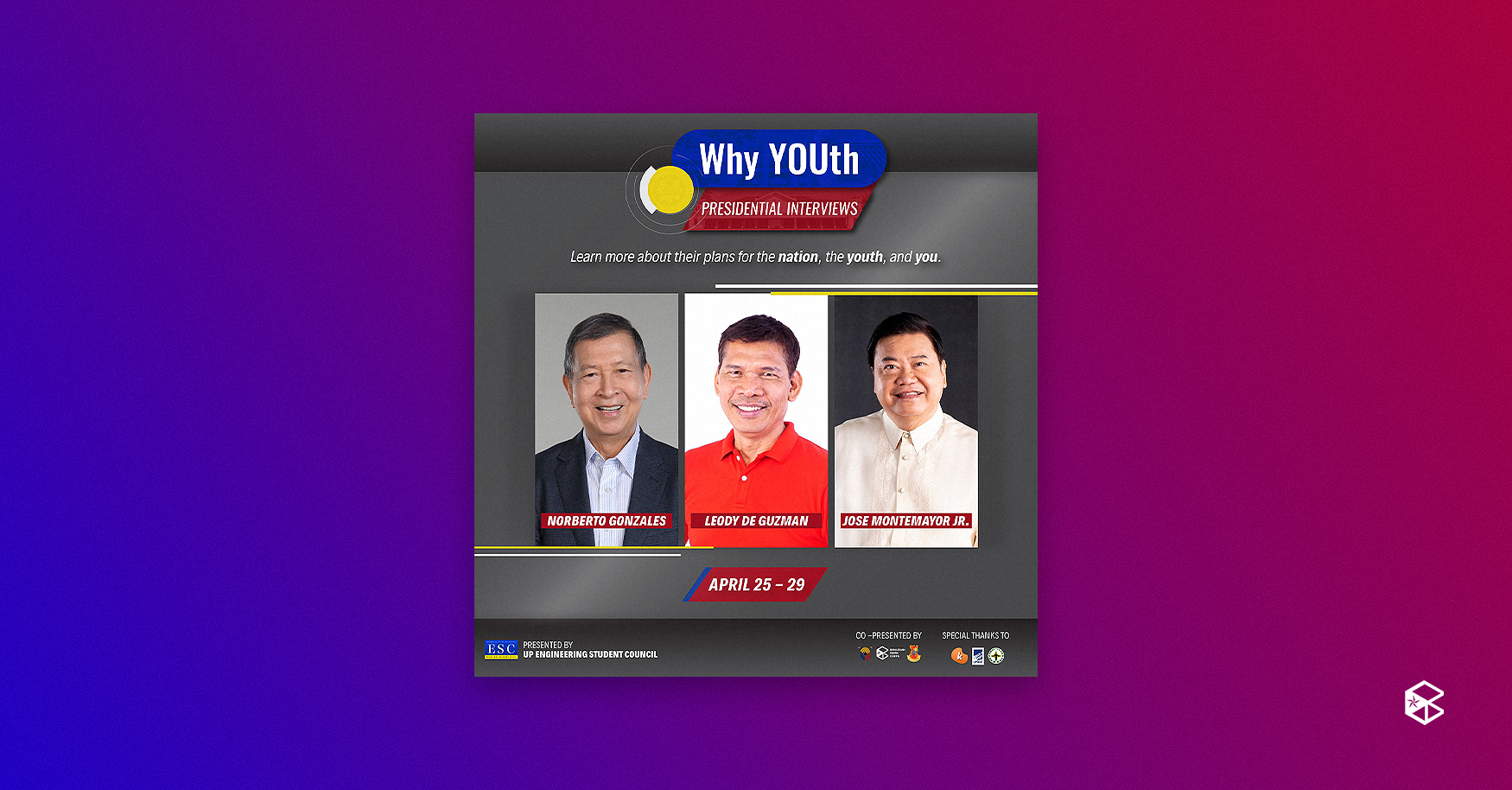 Get election-ready with UP ESC's "Why YOUth: Presidential Interviews”

With the objective to promote social consciousness and political participation among the youth in the upcoming national elections, the UP ESC conducted a discourse on the platforms of three presidential aspirants.

Presidential aspirants Leody De Guzman, Norberto Gonzales, and Jose Montemayor Jr. participated in the University of the Philippines Engineering Student Council's (UP ESC) “Why YOUth: Presidential Interviews” conducted from April 25 to 29. Through the interviews, they shared their stances on critical issues regarding national affairs, the youth, engineering, science, and mathematics sectors, and also expressed the plans and programs they intend to implement if elected.

The Filipino youth represents 52% of the total registered voters in the upcoming 2022 elections. Hence, the aspirants’ standpoints regarding national issues, youth affairs, and science and technology are crucial in reflecting their priorities and readiness in governance for the next six years.

At a national level, the interviews revolved around the concerns of increasing the rate of vaccination and plans on widespread inoculation from COVID-19, ensuring that the country is on track to achieve the climate goals in 2030, and providing an affordable and stable supply of fuel and electricity.

“Increasing the number of vaccinations, we cannot make it compulsory because it will be against our constitutional rights. But we can utilize the local government for this purpose... It’s a matter of encouraging our local officials to do more,” Gonzales emphasized on the issue of increasing the rate of vaccination.

In the second segment of the interview, aspirants were asked what their long-term solutions are in addressing the problems in the Philippine education sector; combatting the problem of the rampant spread of fake news; tackling the sexual and reproductive healthcare system; and their legislative agendas in the issues of job insecurity and unemployment. They also presented the projects they plan to spearhead with regard to mental health.

In an effort to encourage discourse about engineering sector-based issues, the aspirants responded to issues related to the increased outflow of science and technology workers and stated their plans to equip and empower the Filipino engineering workforce, proposals on strengthening the standard national building code, and other related policies such as gender equality in the engineering sector, environmental and ecological degradation as a result of mining activities, and development of public utilities.

“The problem is too much corruption in the building and engineering sector,” Montemayor stressed.

Information dissemination, the social consciousness of the masses, and the political participation of the Filipino communities have become critical factors in determining who the next leaders of our nation will be. It is important that every voter is informed to remain highly participative, factual, and rigorous in learning and understanding the plans, track record, and platforms of each aspirant vying for public office.

UP ESC is the official student council that represents the student body of the UP College of Engineering. Their primary platform is geared towards providing efficient mechanisms as a service for the whole College of Engineering and administering relevant projects in pursuit of social consciousness and political awareness.

For more information about the event, follow UP ESC’s social media pages.

Tags: University of the Philippines Engineering Student, "Why YOUth: Presidential Interviews”
Tweets by TheBenildean
Printed from http://localhost:3000 on 27 November 2022