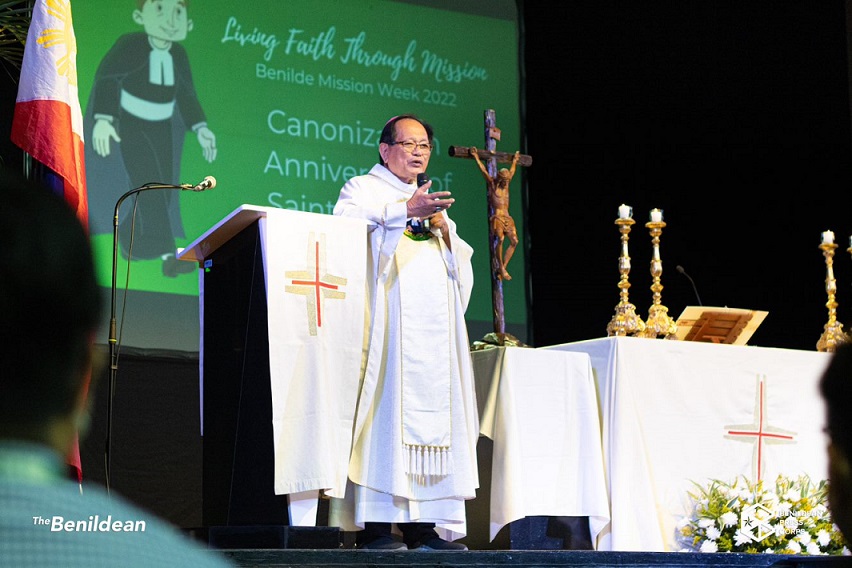 As Benilde continues to move forward, this week-long celebration hoped to remind the community of the passion and mission of Saint Benilde. Take a walk down memory lane through the activities and programs of Benilde Mission Week 2022.

In honor of Saint Benilde Romançon’s canonization anniversary, De La Salle-College of Saint Benilde organized their annual Benilde Mission Week with the theme “Living Faith through Mission” from Oct. 24 to 29. Spearheaded by the Office of the Vice President for Lasallian Mission and Student Life (OVPLMSL), Benilde Mission Week 2022 (BMW 2022) conducted various online and face-to-face events for a hybrid celebration best suited to the new normal.

Starting the week, the School of Deaf Education and Applied Studies (SDEAS) led the community in a live rosary prayer at the Chapel of the Resurrection at Taft Campus. This was followed by a Holy Mass presided by Rev. Fr. Renua Oliver from the Congregation of the Blessed Sacrament. The mass commenced with the Veneration of the Relic of Saint Paul VI as the community offered gratitude and reverence for his instrumental role in Brother Benilde's sainthood. The beloved relic of Saint Paul VI, which is regularly housed at the Manila Cathedral, was available for public viewing at Benilde chapels throughout Benilde Mission Week.

Upholding the legacy of Saint Benilde and the extraordinary Benildean spirit, the Benilde Blazers pep rally was held later in the afternoon at Plaza Villaroza at Taft Campus. The area was filled with exciting cheers, students and associates clad in green and white, and memorable performances from Benilde’s student-athletes. With the upcoming NCAA Season 98 games and other leagues, Benildeans are more motivated than ever to support and show off their school pride.

To continue the Benilde Mission Week celebration, the second day of the event was titled “Tuesday ‘Choose-day’” to emphasize Benildean’s power to choose and make their own missions in life. Scattered throughout the campuses of Benilde were enjoyable activities and programs for students to participate in, including the Paghilom sa Pagkain cooking demonstration at AKIC, the Benilde Jam at the Design and Arts Campus, and the Filipino Sign Language (FSL) classes at Taft Campus. With various choices available, students were free to attend one or all of the programs as they were held at different time slots.

The Thanksgiving Mass for graduating students was also held on the same day at PICC and was live-streamed on Benilde CLM’s Facebook page.

In line with the celebration, the Center for Faculty and Institutional Research (OIER-CFIR) launched the 2022 Benilde Multidisciplinary Research Conference with the theme "Reimagining Innovative and Inclusive Education for the Changing Times," from Oct. 26 to 27 at 9:00 a.m. to 5:00 p.m., via Zoom. The conference discussed the effectiveness of Benilde’s current programs and modes of learning while taking into consideration the new normal and developments.

Meanwhile, on the fourth day of the week-long event, the College recognized 201 Benilde associates and retirees who served for 5 to 30 years during the Benilde Service Awards at the ARG Theater. With respect to their service category, the associates were awarded certificates, plaques, tokens, and cash prizes as a way to show gratitude for their love and loyalty to the Benildean community. This was preceded by a Holy Mass led by Bishop Teodoro Bacani, D.D., as the main presider.

When ten-year service awardee and Industrial Design professor Marlon Barnuevo was asked how he felt about serving the same institution for years, he stated it was about giving back. “Definitely it feels great [and] you know, I’m a Benildean myself so yeah, it’s about giving back not only to the Benilde community, but also to the Industrial Design community as well… It feels great to be doing that for eleven years to be exact.”

To cap off the week, the last day was dedicated to a fellowship and salu-salo event for the Benildean community to come together in festivity with delicious food and nostalgic games at Greenway Square at Taft Campus.

Benilde Mission Week is an annual event commemorated by the Benildean community through Eucharistic Celebrations and fun-filled activities in honor of its patron saint, the institution's founder. The event is rooted in the foundation of the College’s values, traditions, and beliefs.

Saint Benilde Romançon was a school teacher for children for 40 years. He joined as a Lasallian Brother and claimed the name Benilde when he became a John the Baptist de La Salle follower. He was canonized on Oct. 29, 1967, and is now known as the patron saint of vocations. His faith and zeal encouraged many to pursue religious vocations and priesthood.