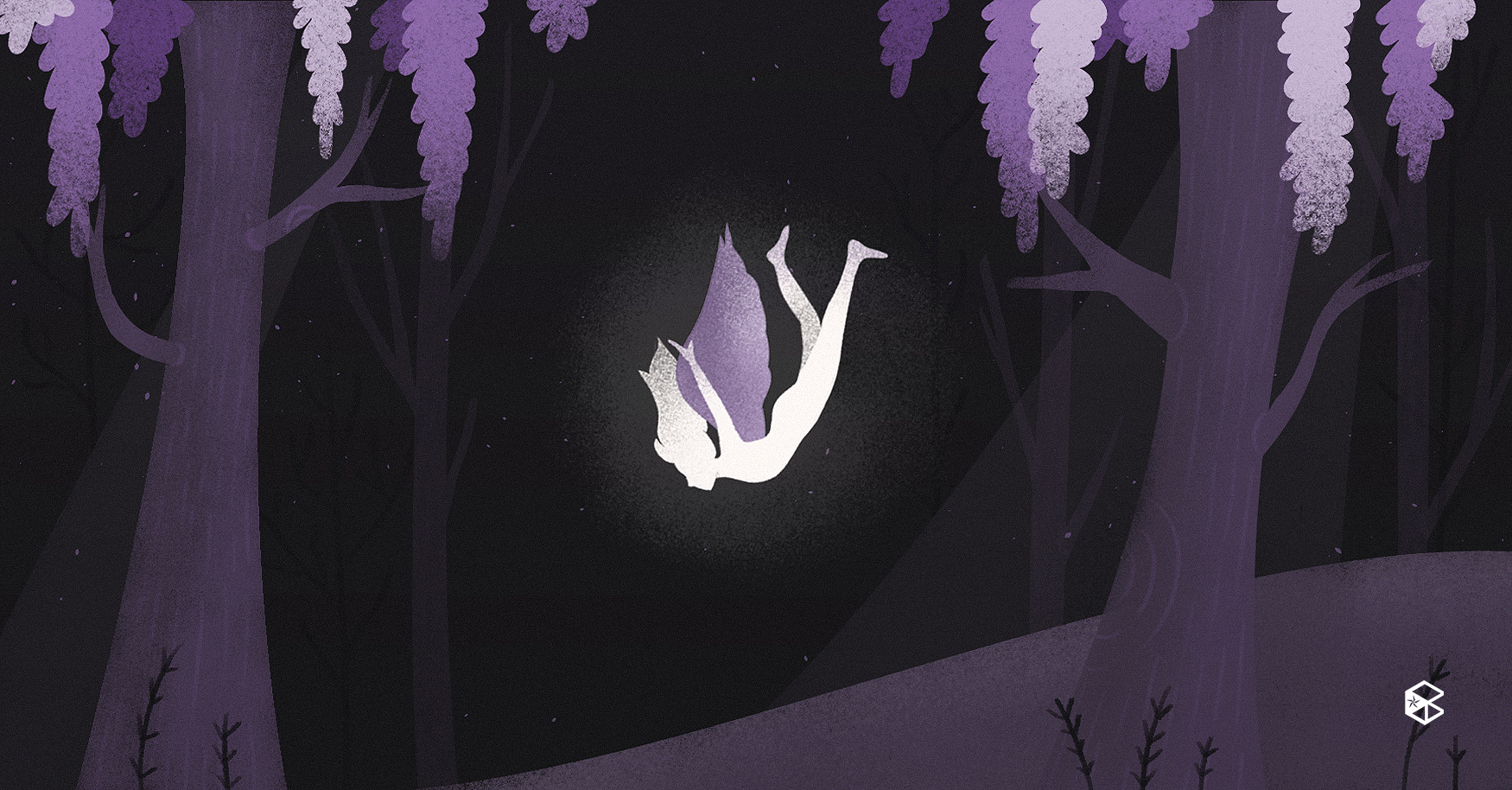 The Opposite of Gravity

It was the fall to my demise that led me to the sky.

Purple flowers snaked around the little blue house on the hill—delicate blossoms of raindrops that seemed hesitant to touch the ground, held high by arborescent vines.

My heart sank to my feet.

They remind me of the very first thing my eyes had laid upon on this earth—love.

The bleating of sheep in the distance left a faint ringing in my ears. I could feel needles poking at my skin. I could smell the earth’s breath greeting me as I woke. It was the sight of his aureate gaze that numbed it all away.

He pointed at me with a trembling finger, “Y-your wings, they’re bleeding!”

I snapped back to my senses, gasping as I felt a jolt of burning pain rush its way up my back. His  widened eyes softened. The next thing I knew, he had carried me up the hill and gently laid me on his bed. His shambled home bore witness to how his anxious glances eventually turned into loving stares as he nursed my broken wings. It watched his kind hands guide me as he taught me to walk.

"It's the force that holds us down," he replied. "And perhaps it's the same thing that made you scar your wings."

Ignorant as I was, I gasped at what he said. I huffed, eyebrows furrowed. "How cruel he is, that gravity!"

He laughed at my frustration, then gave me a quick peck on the cheek.

I felt roses bloom on my cheeks. I’m convinced it was his favorite pastime, planting them there.

When he brought up gravity again, the slash on my wings had already dried, yet I still could not move them any more than I could the hairs on my head. We were out by the bonfire, whose cackling became the music to the dance he guided me through.

I lifted my head so abruptly that I almost tumbled backwards. He caught me just in time, wrapping an arm around my waist to keep me in balance. I winced at my clumsiness. I couldn’t even stand on my own. My chest tightened. Was I being too much?

“Your wings, they’re…” he paused, looking away. “They’re too heavy for you to carry. They’re broken, darling. I…I can’t treat them anymore. We’ve tried everything, haven’t we?”

I swallowed the lump forming in my throat. So I was right—I was becoming a burden. He’s giving up on me.

Please, hold on. I’ll heal soon. Just don’t give up on me. I’ll be alright. I promise.

Instead, I said nothing. He faced me once again, stopping our dance. When he figured out my reluctance to speak, he hung his head low and shook it. He firmly gripped my shoulders.

"We should cut them off.”

I felt my wings grow heavy on my back. My feathers. My skin that hid shyly beneath them. My bones that proudly held them together—

“And yet you wouldn’t heal!” I yelled back at them.

He was right. I could barely remember flying. Earth was now my home—he was now my home. How could I love him right if I could not even walk properly? And yet—and yet I—

I’ve lost to the tears I’ve been battling. I quickly wiped away those that managed to escape.

He embraced me tightly.  "Remember the lakes I told you about? The flowers in the forest? We'll visit them together. I promise, Agatha. You just have to learn to walk." He whispered in my ear. "I’ll help you. Trust me."

Trust us, my wings echoed.

But I’ve already made my choice.

I could still feel the metal grazing through my flesh, could hear my wings’ shrieks as my skin peeled slowly from my bones.

What have you done? Stop. Please!

The blood tracing down the curve of my spine served as their burning tears. My sobs emanated from the hill, making their way down the quiet valley to wake up the sleeping flock and the mountains beyond.

He kissed me repeatedly, wrapping me in bandages—as if he was apologizing for the agony he caused. Of course I accepted his repentance. I assured him I was angered more by his rusty saw than his hands. I closed my eyes as I touched them with my lips. My betrayal replayed itself in my mind: feathers of snow soaked in brutal red, scattered upon the moonlit grass. The wind swept them back up to heaven. My heart eased when I caught him watching the sight in awe.

Perhaps he was the cure to the scars my wings had left.

There was something freeing about losing half my weight.

I felt powerful. No, invincible. I thought that the earth shared my sentiments, that it would spare me from the unforgiving tides that lapped angrily against the foot of the cliff. I forgot about the relentlessness of gravity. I became reckless.

I was seconds away from meeting death, had he not saved me one last time.

If only I knew that the same depths that almost took my life had been the choice his mother made. He would not have to face the past he had worked so hard to bury. He would have still loved me. The flowers would have blossomed because of me.

The poets would call it falling out of love, but in truth, it was more like crawling out the abyss, going against the force that led me into his arms and forbidding myself from ever falling in again.

I tore on the grass and cursed at the unknowing sky. I let the soil taste the salt in my tears. I wished to flood the whole valley. A soft wind blew across the valley, making me shudder.

Maybe for the very last time, I could wait for—no. Not a single second more.

It was the only farewell I could utter without spending the strength left in me. I could have prayed to the wind to send it to him. Instead, I begged it to guide my feathers. And for the first time in many years, it finally listened to me.

I used to believe I fell from heaven that day to be sent to him. But instead, our love had served only to become a reminder of who I was, of who I am supposed to be—a creature of the clouds and stars that no force can drag down, no wind can blast away.

I am the opposite of gravity.