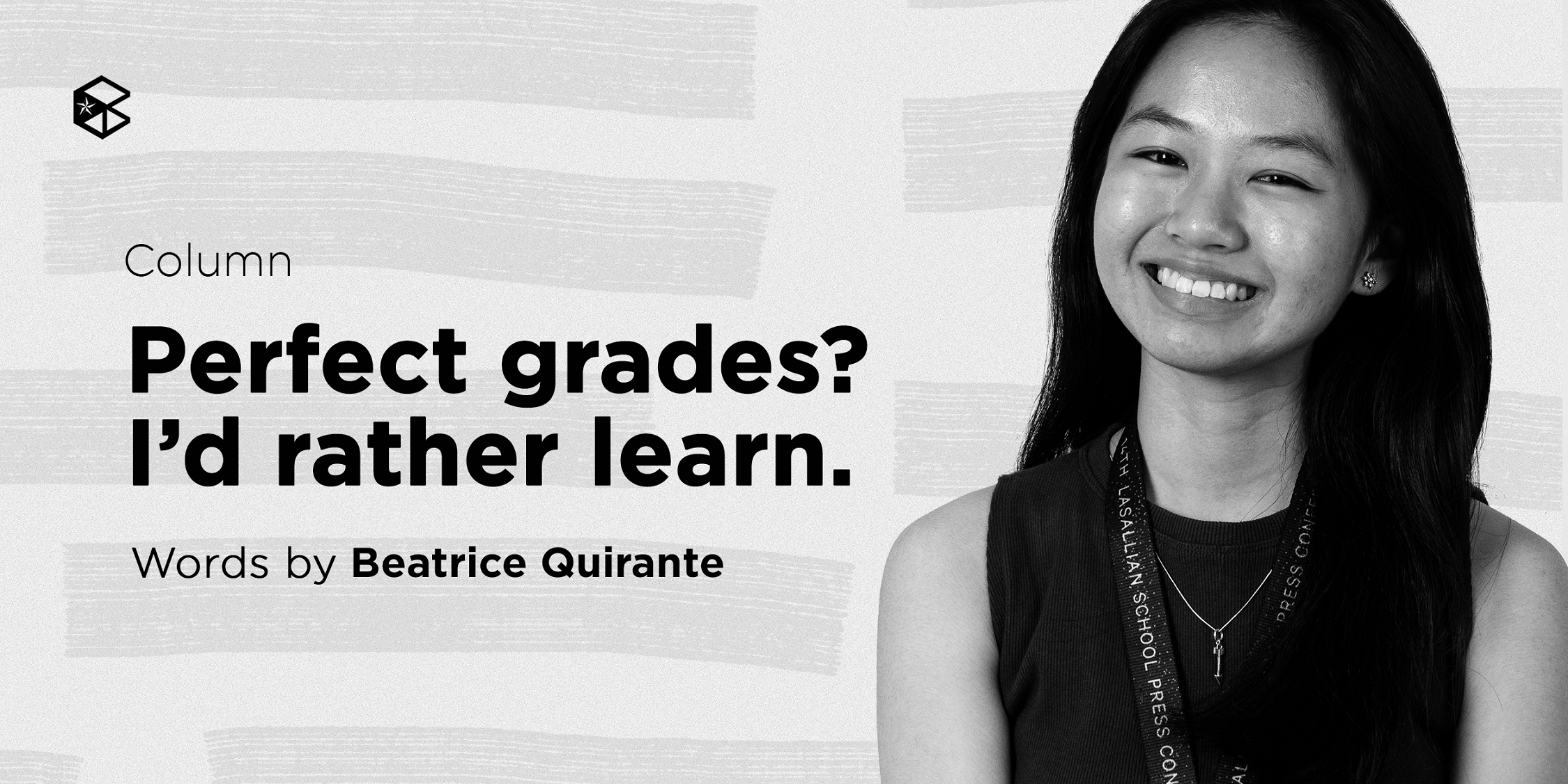 Perfect grades? I'd rather learn.

Nevermind the A+ streak. Did you actually learn, though?

It was never enough.

Pressured to have perfect grades, some students resort to cheating to meet others’ expectations. Sadly, in a learning environment where failure must be seen as an opportunity, some label it as a stain to one’s capabilities.

Most parents and their children in Asian countries have adopted the mentality of giving utmost importance in education, which eventually leads to high academic expectations. As a result, this adds to the value they attach to grades. Although striving for good grades is considered a stepping stone to success, as renowned activist Martin Luther King, Jr. put it, “The function of education is to teach one to think intensively and to think critically. Intelligence plus character—that is the goal of true education.”

As students compete for an A+ streak, like boiling frogs, they slowly give in to centering their lives about school, often memorizing rather than learning and building character.

Stuck inside the four corners

Education, as defined by Merriam-Webster’s Dictionary, usually happens in an educational institution as the action of teaching. Meanwhile, it defines learning to happen from an act or experience which can lead to a “modification of a behavioral tendency.” The former involves a systematic process while the latter involves a free-form process of acquiring knowledge, usually through experiences. Learning positive and negative consequences received from one’s actions builds up behavior modification, a life-long process that molds individual character and skills.

In the Philippines, part of the education process are graded exams to assess our academic performance. Unfortunately, these have become one of the basis for comparison among students. Based on research titled Stigma and Help Seeking for Mental Health Among College Students by Daniel Eisenberg, Marilyn F. Downs, Ezra Golberstein, and Kara Zivin, lower grade point averages are linked to depression.

Heavily using academic achievement as a basis for self-worth happens among students. The unhealthy obsession of getting perfect grades is depriving oneself from expanding out of their comfort zone by attaching fear in failures. It prevents an individual from learning the lessons that come with failures which are inevitable in the process of learning—in and outside the school.

A diploma is not the endgame

It is undeniable that good grades are considered by companies with high-paying jobs. However, beyond grades, most companies look at work experience.

Ayala Land hiring manager Leah Yvette Alay-ay said in a 2018 interview with GMA that these experiences can be from organizations or extra-curricular activities. “Through these organizations they're part of, the leadership positions they held—it shows us that they're capable of time management, of leading eventually a group of people…” she said.

In addition, companies also look into an individual’s skills and work experiences, such as internships and work-study programs.

According to a 2018 JobStreet report, work ethic, communication skills, and analytical thinking are the most common factors employers look for in their applicants. JobStreet Philippines country manager Philip Gioca, in an interview with Rappler in 2018, said experience is believed to be the basis for assessing an applicant’s problem-solving and analytical skills. Aside from honing one’s skills, it creates an opportunity for a deeper understanding on how certain industries or systems work.

College is an opportunity, not the “endgame.” There are well-known artists and businesspeople who are successful in their career and businesses that either excelled or failed in college, such as Facebook Chief Operating Officer Sheryl Sandberg, Amazon Chief Executive Officer Jeff Bezos, Oracle Corporation Co-founder Larry Ellison and Apple Inc. Founder Steve Jobs.

At a TED talk, psychologist Angela Lee Duckworth, emphasized that grit—as she defined it as passion and  perseverance for long-term goals—is the indicator of academic and professional success. Like her theory, some psychologists and other professionals support that passion and perseverance pushes an individual to grow out of their comfort zone and build a character that sees failure as part of the process of learning and achieving one’s goals.

It feels fulfilling to have good grades once you put hard work and dedication into it; however, you must never attach your self-worth and compromise your values to those report cards. You are more than just numbers and your life isn’t about the awards or certificates you receive. Afterall, you’re learning at a larger campus and that’s “life.”

The article is also published in The Benildean Volume 6 Issue No. 3: Translate

Tags: TB20, Columns
Tweets by TheBenildean
Printed from https://read.thebenildean.org on 16 May 2021