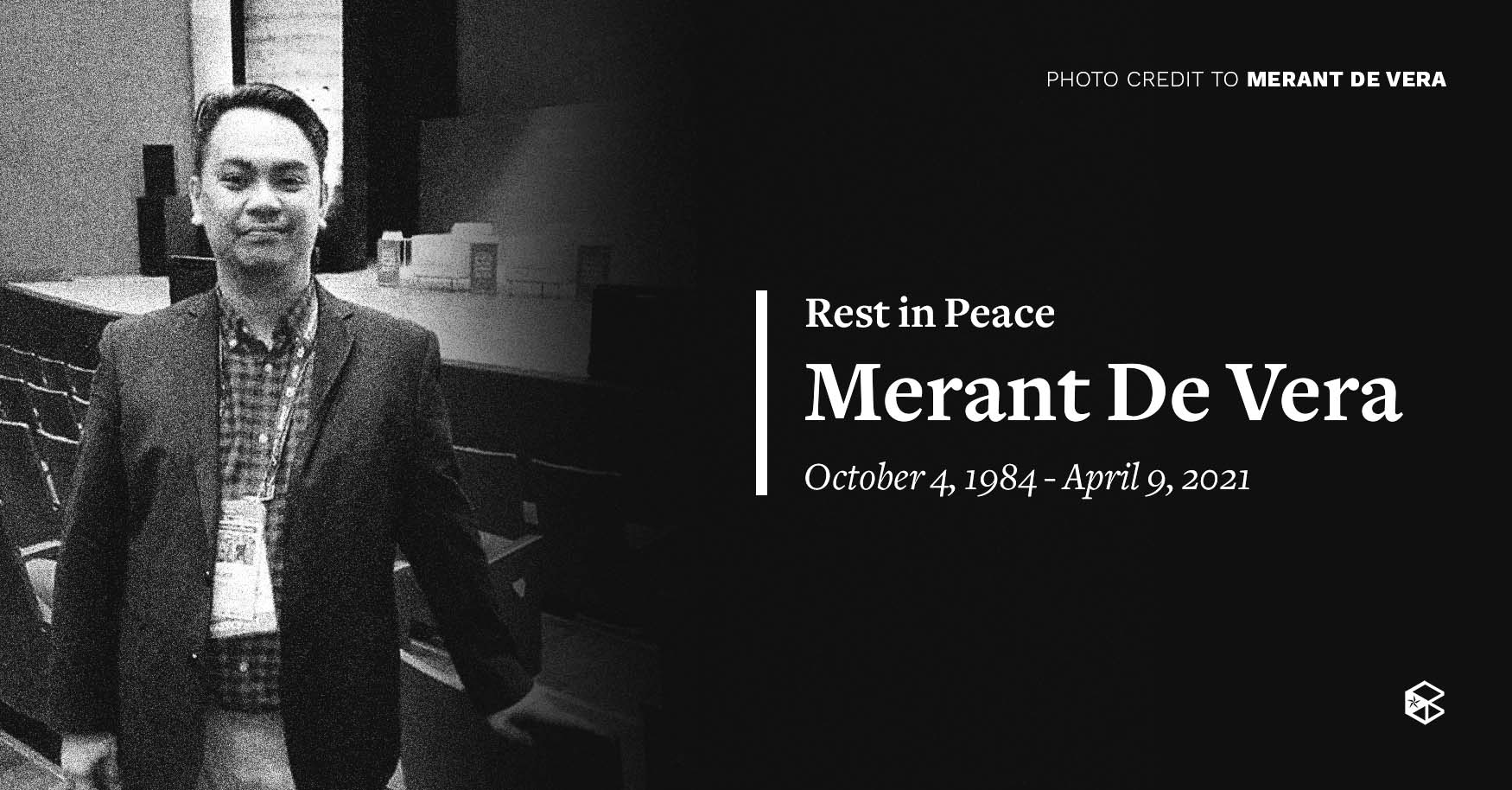 Layout and Collat by Gaby Bacani and Ann Alvarez.

A celebration of Ar. Merant De Vera’s blueprint of devotion to education

Despite his tough exterior and intimidating aura, Architect Merant De Vera was described by his colleagues, peers, and students to have a true passion for teaching and a heart of gold.

With the untimely passing of beloved Benildean professor Ar. Merant De Vera last April 9 due to a cardiac arrest from COVID-19 complications, here are what some of his closest colleagues and students have to say about the beloved architect’s life and legacy.


Benildean professor Ar. Ven Lawrence Quizon, 35, a close friend of Ar. De Vera’s, expressed that he was quite intimidating as a professor. “I remember during his first year [of teaching in Benilde], he was very particular about the size of paper that needs to be submitted. Those who did not follow would be rejected,” Ar. Quizon said in an interview with The Benildean.

However, Ar. Quizon added that despite his reputation for being a strict professor, he was well-loved by his students for his “witty jokes, banter, and guidance.” He added that students were drawn to the professor due to his “funny antics.”

Ar. Quizon shared the best memories he shared with Ar. De Vera  often consisted of lunches and dinners together with the rest of the Benilde Architecture (BS-ARCH) faculty, and they were often seen laughing and joking around. They would also often visit each others’ classrooms at night to observe and watch students work.

Benildean professor Ar. David Barcelona, 58, also conveyed Ar. De Vera’s deep passion for teaching students and fellow colleagues. Both professors were good friends, and would often be seen sharing stories and advice to each other by the back gate of Benilde’s School of Design and Arts (SDA) Campus.

Ar. Barcelona also shared a funny memory he had with Ar. Merant during their stay in Vigan in 2013. Ar. Barcelona noticed that the latter had not shown up during breakfast, despite their nearing departure time that morning, so he had rushed to Ar. De Vera’s room to wake him up. “You can imagine his long, disheveled hair [that morning], asking “Anong nangyari?”

Furthermore, Ar. Barcelona expressed that Ar. De Vera’s “jovial nature was very infectious.” He also expressed that his passing is “such a loss for the community, and for me in particular.”

Lastly, for Benildean professor Ar. Ramon P. Bizares, 61, Ar. De Vera was the person who made him a full-time faculty member of the BS-ARCH program. “As an educator he is very strict, orderly, but very loving to his students. As a friend he is very blunt, honest and very reliable,” Ar. Bizares shared, also good-naturedly noting that he remembers Ar. De Vera’s long hair from before.

Both professors got along very well, according to Ar. Bizares. Their topics and opinions would go beyond the academic world, and they would still be able to understand each other. Ar. De Vera, much like he was to his students, would often “remind them [faculty members] to do their homework before teaching and presenting a research.”

“Ar. Merant was a diverse and experienced researcher, and he inspired me to present my very first presentation at the National University of Singapore,” Ar. Bizares expressed.

“The [Benilde] Architecture Program had the privilege to have had Ar. Merant as part of its faculty pool and as a friend. Ar. Merant has raised the bar in the research side of the program [...] Merant has always been a silent worker he never expected or demanded any recognition, not only inside the Architecture program but within the CSB community,” Ar. Bizares added.


A well-loved mentor, a life-long friend to his students

Ar. De Vera’s legacy in Benilde goes beyond his relationships with his peers and colleagues, with the professor having inspired a generation of aspiring Benildean architects and designers, now accomplished professionals in their respective fields.

This testimony serves true for most of his students, such as Michael Evan Suelto, 25, who was under several of Ar. De Vera’s Architectural Design classes, as well as Building Utilities and Planning classes. However, for Mr. Suelto, Ar. De Vera was a true professional who helped shape him into the man he is today.

Moreover, Mr. Suelto also shared that despite his initial strict facade in the classroom, Ar. Merant was truly a kind person with a great sense of humor. His best memories with the professor were characterized with “kwentuhan, asaran, lokohan.” “Umaga, gabi, at madaling araw nagtatalo pa kami niyan—hindi siya magpapatalo talaga sa huli.”

Mr. Suelto also thanked Ar. De Vera’s family, because he was able to find a good and intelligent friend in Ar. De Vera.

For BS-ARCH alumnus Enzo Belandres, 30, Ar. De Vera gave off an “unapproachable aura” at first. However, once Mr. Belandres got to know the professor better, he was “the complete opposite.”

Having been in Ar. De Vera’s Housing and Urban Planning classes, Mr. Belandres voiced that his fondness for the professor stemmed from their candid conversations outside the classroom. From all the professor’s teachings, Mr. Belandres said that the most important one was “to know when to take life seriously and when to take responsibility, but at the same time enjoying simple pleasures.”

“The loss of Ar. Merant is without a doubt a heavy loss for our community but more so for his family. We can take comfort in knowing that his passion and lessons live on in his students,” Mr. Belandres added.

Finally, for BS-ARCH alumni Chiara Marquez, 24, Frankie Abraham, 28, and Louine Macapagal, 29, Ar. De Vera had playfully dubbed them as the “Titas of SDA,” as they were older than the rest of their batchmates during their stay in Benilde.

For them, while Ar. De Vera was intimidating at first, his stern methods of teaching and high expectations massively improved his students’ work. He truly cared for his students, as seen in his efforts to continuously go through their work to offer guidance and support, even beyond class hours.

One of their most memorable moments with Ar. De Vera was during one of Ms. Macapagal’s presentations. The professor has interrupted her mid-delivery, expressing that he did not like the colors she used for her Powerpoint Presentation, even going so far as to describing one of the colors as “kulay tae.” Due to the rest of the class arguing that the colors looked fine to them, Ar. De Vera had conceded with a “Sige, okay na ‘yan.” However, Ms. Macapagal urged the professor to tell her what colors she should have used instead, resulting in Ar. De Vera admitting that he was colorblind. The whole class was in disbelief, and everyone began to poke fun and laugh at the professor, who had never shown signs of being colorblind to them before.

When asked about any of the professor’s teachings that helped them excel in work and in life, the “Titas of SDA” shared the following, “Sir Merant wasn't a fan of any drama or any form of kaartehan. The way he would offer his help or support is through saying words that would really knock back some sense into you. [...] He is the "pause" that you did not know you needed. That pause to take some time to pick yourself up and pull yourself together. It's to take that timely pause that we apply in life everyday.”

Moreover, what truly stuck with them beyond their time in the College was Ar. De Vera’s passion, spirit, and warmth for his loved ones. He was a no-nonsense kind of professor who pushed his students to become the best versions of themselves.

“We want the [Benilde] Architecture community to know that Sir Merant is and always will be a significant part of our CSB experience. He inspired us and we found a great mentor in him. [He was] Someone whose passion and humor creates a spark in others is not easy to come by. We're truly lucky and deeply grateful to have had the time we had with Sir Merant.”