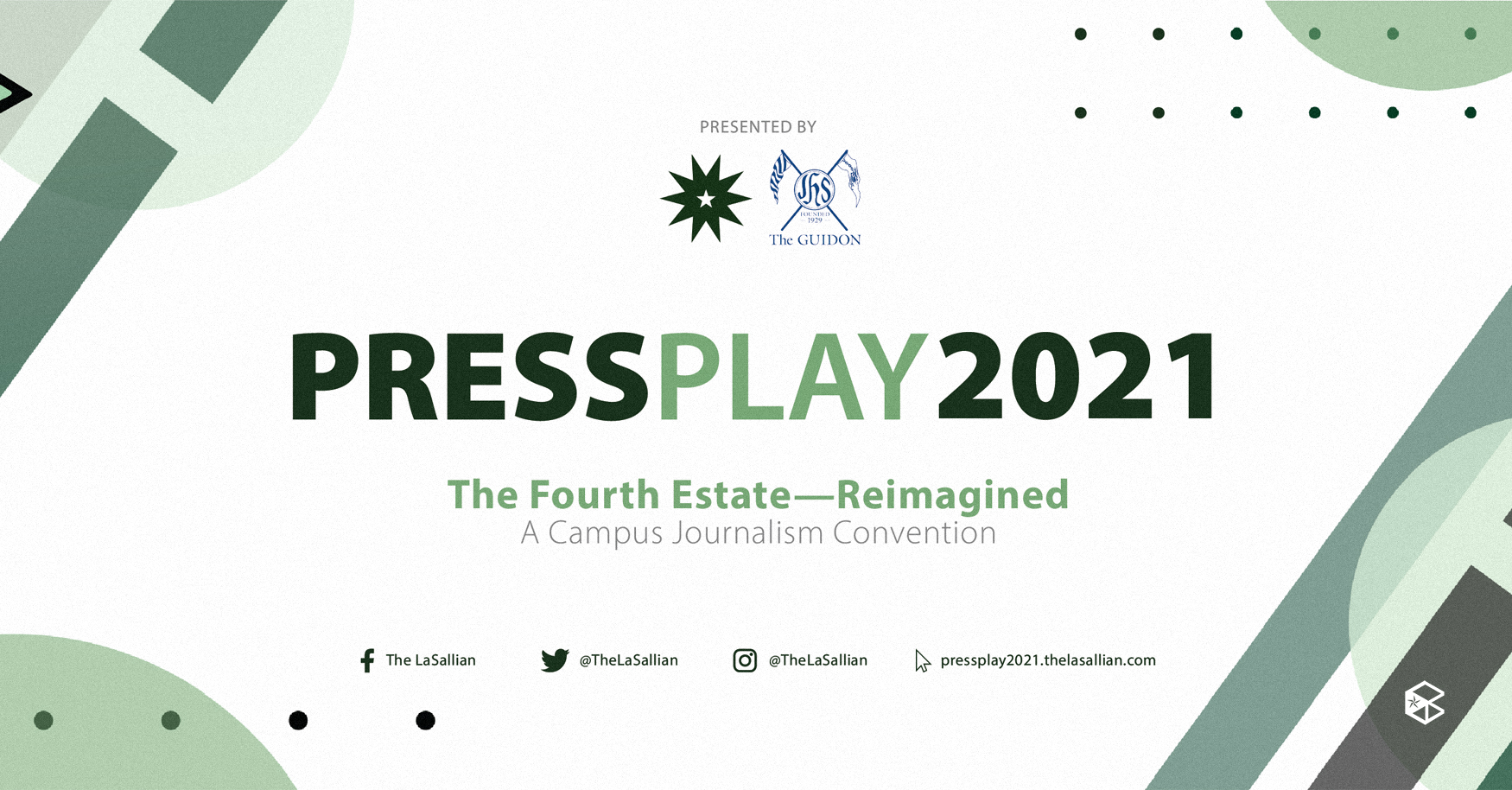 PressPlay 2021: Today’s journalism in pursuit of the truth

Uncover and re-establish the power of the fourth estate, as well as shape public discourse with the truth in the annual campus journalism convention, PressPlay 2021.

PressPlay 2021, the four-day online event held from April 21 to 24, was filled with student journalism seminars organized by The Lasallian and The GUIDON—the official student publications of De La Salle University and Ateneo de Manila University, respectively—which gathered student publications and journalism organizations across the Philippines to immerse and educate campus journalists with its theme “The Fourth Estate—Reimagined,” and recognize these publications via PressPlay Awards 2021.


“What must journalism look like?” was the question left after the opening remarks of the editor in chief of The Lasallian, Jan Emmanuel Alonzo, regarding PressPlay’s theme on reimagining the roles of the fourth estate or the press in speaking the truth and shaping public discourse. As society is continuously experiencing inequality, it was emphasized that journalists must reevaluate their approaches on empowering the truth to adapt to these ever-changing challenges.

The maximization of the fourth estate for truth-seeking

Stemming from his bold and riveting works advocating parliamentary reform, journalist William Cobbett was described by essayist William Hazlitt as “the one-man fourth estate.” This implied that the press and news media have the capacity to shape political and public discourse alongside the three branches of government. Since then, journalism has been called the “fourth estate.”

Today, the term is still embodied in journalism. As Professor of the Department of Journalism in the University of the Philippines Diliman Dr. Ma. Diosa Labiste noted, “Journalists allow [a] dialogue between the public and professionals.” In turn, the discourse can lead to nationwide solutions, cooperation, and participation, which may spark actions like community pantries.

As the fourth estate, it is critical that journalism remains biased to the truth. In Dr. Labiste’s plenary session titled “Under Fire: When journalism takes a stand,” she highlighted that journalists must take a side on a fair and complete presentation of news where fact-checking is deliberately done, and “frame blindness” or prejudgment is avoided.

“Cultivate a sense of justice as a journalist,” Dr. Labiste concluded. Furthermore, she added that it will serve as a moral compass in the practice of journalism.

Within campus walls, justice is pursued by student-journalists through investigative journalism, particularly on shedding light on sexual harassment cases. Though information gathering can become quite difficult, The GUIDON associate editor Tatiana Maligro emphasized to “Never give up on the story.” Survivors put their trust in journalists with their stories, therefore, as Maligro explained, the press must serve as a platform to amplify these voices in a greater landscape.

In the same panel discussion titled “Matapang at mapanuri: Uncovering truths within campus walls,” Alonzo expressed that “We [as journalists] are doing our jobs, and we’re doing our duty to tell these stories.”

Delivering the truth to the public

Discovering the truth is one thing, delivering it to the public is another. Knowing the right tone and angle to use for the target audience requires analysis. In the breakout session “Slices of life: Exploring the nuances of features writing,” lifestyle writer and editor Ms. Tata Mapa enumerated that apart from considering the reader as the “key to unlocking [the] angle,” it must be new, compelling, and relevant.

The public must discern relevant information, especially this pandemic, and journalists play a critical role in doing so. Rappler independent science writer, Ms. Shaira Panela, said in the session “Science journalism amid the infodemic,” that to effectively examine a piece of information, it must go through at least three sources, “a document or website, an interview from a relevant speaker or expert, and an independent person or examiner of that document or study.”

Apart from written pieces, illustrations as mediums were emphasized at the session “Capturing the zeitgeist with editorial cartooning” where Mr Rene A. Aranda, Chief Cartoonist of The Philippine Star, wherein he provided tips on creating an editorial cartoon, accompanied by his own thought-provoking editorial cartoons. Using Filipino humor, he used the concepts of simile, hyperbole, or irony in some of his works; and heavily avoided the use of labels and text bubbles.

Mr. Aranda reiterated that editorial cartoons must be understood in a snap. “Hindi pwede basta drawing lang, dapat maintindihan na kaagad [‘yung mensahe].” (Drawing is not enough, [the message] must be immediately understood.)

PauliWorld, the official publication of St. Paul College in Pasig, and The Central Echo, the official student media of Central Philippine University, won first place in Best Art or Cartoons Page or Section; and Best Layout and Design, respectively.

Managing Editor Bryce Rubi and Associate Editor of The Lasallian John Dysanco delivered the closing remarks, emphasizing on the vital role of journalism amid the political and health crisis through factual reporting and writing and as a platform for the truth.

Tags: PressPlay 2021
Tweets by TheBenildean
Printed from https://read.thebenildean.org on 16 May 2021