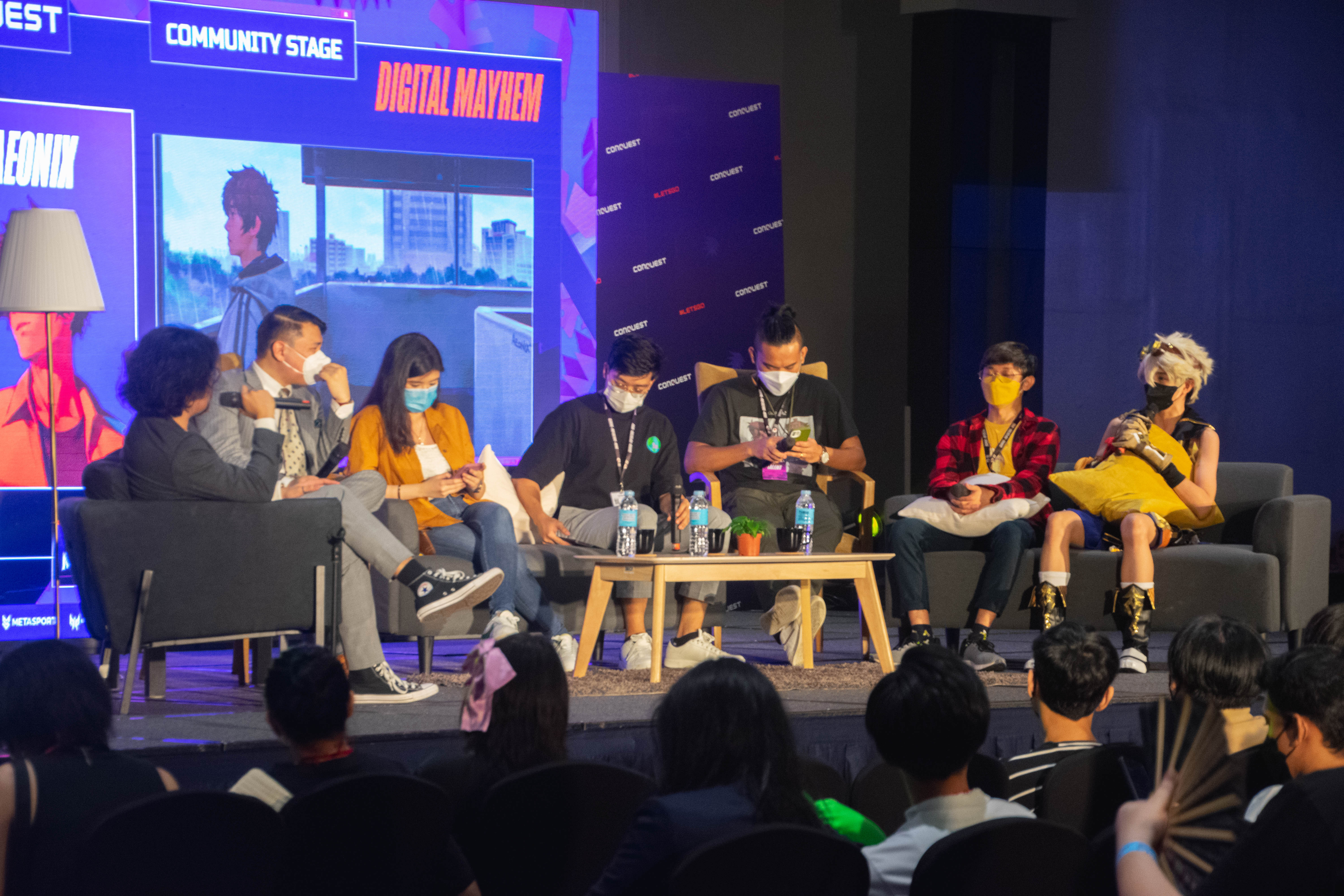 Gaming and pop culture enthusiasts celebrated the return of in-person conventions with the 2022 CONQuest Festival.

From gaming and content creators hyping up the crowd to the vast art and merchandise booths scattered around the halls, gaming and pop culture enthusiasts had a blast at the “CONQuest Festival” from July 23 to 24 at the SMX Convention Center, Pasay City. Organized by AcadArena, this major gaming and pop culture festival has brought back the excitement for local conventions.

Tagged as the “Philippines’ premiere gaming and pop culture festival,” people arrived at CONQuest with high expectations, especially for first-time con-goers. The weekend-long event had a lot in store for “Questers,” featuring notable guests from the gaming, anime, content creation, and art communities. Attendees were also in for a treat because of the variety of activities held, which included guest panels and meet and greets with creators, esports matches, expos of the latest gadgets and games, and crafter’s quarters for merchandise and art.

A whirlwind of fun and mayhem

Kicking off the first day, people were welcomed into the venue with a cheer segment from the De La Salle University (DLSU) Pep Squad. With the festival being held on two floors, numerous events were being staged simultaneously. This offered attendees plenty of choices to find the activities they would have the most fun with.

The first set of activities included a community panel featuring V33Wise, a well-known Mobile Legends: Bang Bang (MLBB) duo under Esports organization Blacklist International. This detailed the experiences of the legendary pair Jonmar "OhMyV33NUS" Villaluna and Danerie "Wise" Del Rosario in their esports careers. During the panel, rising Twitch streamers and content creators Kyedae, Atsu, and Nekkopii also had their meet and greet sessions with fans. Furthermore, AcadArena held their “Alliance Games” finals match of League of Legends between players from the University of the Philippines-Diliman and New Era University.

Content creators JiConyo and Peenoise Realm had a “Sheeshathon community panel,” bringing fun and entertainment to Questers. Independent VTubers Bao and Senz, Osu! streamer BTMC, and Genshin Impact streamer Tuonto were slated for the next meet and greet schedules.

In the late afternoon, famous comic artists such as So Asian Comics, SSKAIT Comics, Hunghang Flashbacks, Libreng Komiks, and Aeonix inspired attendees with their journey of being visual storytellers on the “Digital Mayhem” panel. This coincided with voice actors Yatco and Ratana having a meet and greet session too, followed by the schedules of LilyPichu, Razzie Binx, Een, Peenoise Realm, and Christian Banas.

On the next day, several press conferences for Alliance Game finals were held for Mobile Legends and Wild Rift. Alongside these were second legs of the meet and greets from the previous day, and a morning panel from the dubbed “Titas of Inazuma” which featured Genshin Impact voice actors Anne Yatco and Ratana.

On the other hand, the afternoon events of the second day included a panel by OfflineTV creators LilyPichu and Michael Reeves. The crowd even sang LilyPichu’s song titled “Dreamy Night.” There were also educational talks on the esports industry, such as discussions on opportunities, working with contracts, and voice acting. The late afternoon also brought on the Genshin Impact cosplay contest which thrilled a lot of fans and even impressed some of the guest voice actors from the game.

Surfing the waves of tech, gaming, and art

The festival also offered “Questers” a chance to test new gadgets from the event’s partner sponsors such as Acer, Logitech, and MSI. Moreover, gamers had their fair share of fun with the “Retro Arcade” area, which had several classic game titles from iconic 2D consoles. Attendees also tried their hand at table-top and role-playing games like Dungeons and Dragons. Additionally, several art booths were set up across the second floor of the festival, which displayed a variety of merchandise such as art prints, stickers, charms, and keychains.

While the convention activities stretched all day long, this did not stop attendees and even cosplayers from maximizing their weekend-long experience. From within the convention halls to the entrances of the venue, attendees and cosplayers alike took photos with each other. Inspired by a variety of anime titles to video games, cosplayers strutted their stuff in the shoes of their admired characters.

Ending the day with a rush of excitement

To conclude day one, a Valorant All-Star Showdown exhibition match was staged between two teams of well-seasoned competitive players. The first team, Team Razzie, included creators such as RazzieBinx, Een, Nicole G, burg, and SuperMJ. Their competitors, Team Kyedae, were composed of Kyedae, Kris Rey, MaggieKarp, Xavi8K, and s0nshine. Attendees definitely did not miss this opportunity to watch and cheer on their favorite creators live.

Those who couldn’t make it to “CONQuest” this year were also able to cheer on their favorite teams through a livestream of the match on the event’s Facebook page. After a best-of-three series, Team Razzie emerged victorious in an overtime win.

Concluding the second day, the Alliance Games Valorant Finals between players from DLSU and Ateneo De Manila University were held. This was later followed by a closing ceremony, which successfully tied up the festival as a whole.

CONQuest undoubtedly bagged the win in giving Filipinos a premier convention experience, especially during the “new normal” transition. Attendees had a memorable time celebrating gaming and pop culture in one event. Sure enough, “CONQuest Festival” will return next year with more guests, bigger activities, and twice the fun for Filipino con-goers to experience.

Keep an eye out for updates for the next festival here.