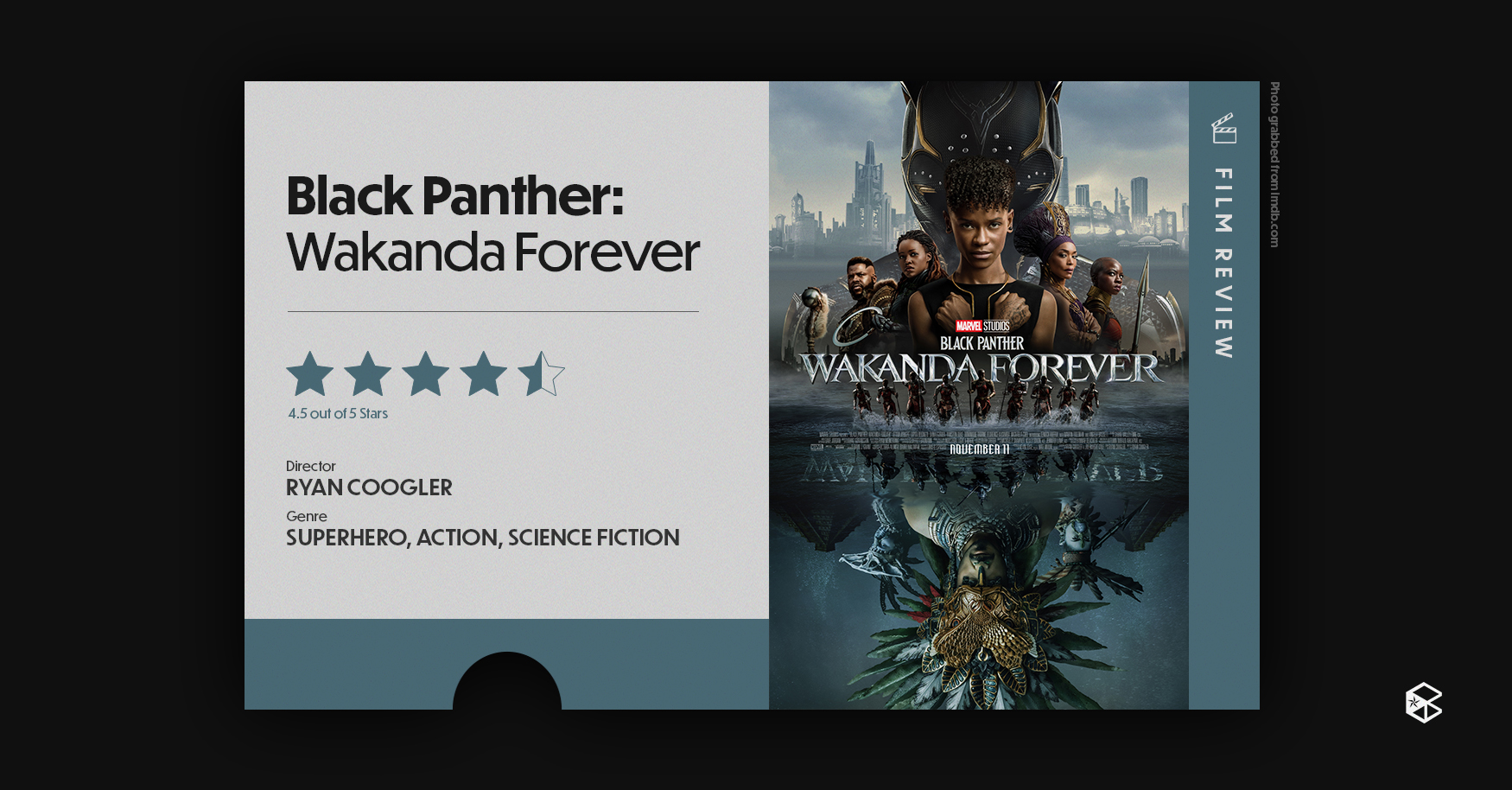 Honor the legacy of the late Chadwick Boseman with Black Panther: Wakanda Forever

Bow down to a new era of Wakanda as it faces new threats from the outside world and within its waters. Don’t worry about getting soaked as spoilers stay in the oceans!

Released on Nov. 9, Black Panther: Wakanda Forever takes viewers on an emotional ride back to Wakanda as its story honors the late Chadwick Boseman and introduces new dangers that will keep you on the edge of your seat. Directed by Ryan Coogler, this second Black Panther film offers a meaningful take on superhero films.

Right off the bat, the film introduces King T’Challa’s (Chadwick Boseman) final moments before death as Shuri (Letitia Wright) attempts to recreate a synthetic heart-shaped herb that may cure her brother. Not having enough time, T’Challa dies, and she is grief-stricken alongside Queen Ramonda (Angela Bassett), who takes up the position of Wakanda’s new ruler.

In the wake of the king’s death, Wakanda is pressured to protect its nation from the United Nations and the vibranium-rich underwater kingdom of Talokan, led by Namor (Tenoch Huerta). Upon learning of a created underwater vibranium-detecting machine that threatens his home, Namor confronts Shuri and Queen Ramonda to turn in the scientist responsible for the machine, or he will declare war on Wakanda. With time running, Queen Ramonda tasks Okoye (Danai Gurira) and Shuri to retrieve and protect the scientist from Namor.

The movie sees several cast members from the first film return to this new installment and introduces new characters along the way. Tenoch Huerta’s Namor and the rest of the Talokans are a scary-good set of antagonists with how they match up against the Wakandans with their underwater and superhuman abilities. Previously the most powerful and richest country, Wakanda is certainly threatened here by Talokan.

Viewers also get a glimpse of Riri Williams’ Ironheart (Dominique Thorne), who kicks it off with Shuri in terms of technological knowledge and interests. One will see how Riri and Shuri use their brains to handle the dangers Wakanda faces in this film.

A major thing to note about this film is how it drastically changes in development with Boseman’s death. Unaware of Boseman’s illness, Coogler mentioned back in 2020, he spent the year “preparing, imagining and writing words for him to say [in the film] that we weren't destined to see." Ultimately, audiences saw a further exploration of Wakanda’s world and its characters in this sequel as a way to honor the legacy Boseman helped build in the first film.

There’s much to say about this installment, such as how it takes a melancholic path compared to the lighthearted route seen in most MCU films. It successfully integrates Boseman’s death into its plot without forsaking its intentions of expanding the world of Wakanda itself. Its narrative is also well-written, with a smooth introduction to the Talokans. Moreover, one can applaud the moving dialogues that will bring audiences close to tears, as seen in Angela Bassett and Letitia Wright’s performances.

In line with the recurring plot point of King T’Challa’s death, Black Panther: Wakanda Forever tackles the theme of grief while honoring Boseman. People see a deeper side of Shuri as she struggles to accept and move forward with King T’Challa’s death. However, the theme is present not only among the royal family members of Wakanda but also among the subjects and tribe members of the country.

Besides that, the film’s narrative also takes on international politics in its brief scenes of political clashes among the United Nations, Talokan, and Wakanda. It mirrors reality’s race among nations to acquire highly sought-out resources, with war looming from this power contest.

To emphasize certain scenes in the movie, the score for this film is on point with its impactful music. From the percussive sounds that can immerse one in the world of Wakanda to the emotional melodies highlighting heavy moments, the scoring hits the right marks. Additionally, pop and R&B singer Rihanna makes a comeback to music with the release of “Lift Me Up” as a tribute to Boseman in the film.

Visually, Marvel Studios puts a lot of effort into bringing Wakanda to life once again with its stunning visual effects and staging of the underwater scenes. Wakanda’s advanced technology is envisioned as ethereal and natural alongside the Talokan Kingdom’s alluring structures.

As the film is one to praise, it still has some things that can be improved. This includes minor plot holes in Shuri’s character that were introduced but not resolved by the end of the film. The Ironheart suit of Riri Williams also seems a bit too out of place in design and more toy-like. However, with the “Ironheart” series coming soon as a direct sequel to this movie, the suit may definitely get an upgrade.

As a combined tribute to Boseman and as an MCU film, Black Panther: Wakanda Forever is a touching movie that will entertain and move viewers with its themes and storyline. It captures the legacy Boseman upheld and offers it to the world through the film’s unique characters. Certainly worth the wait, this movie is one to watch as it caps off Phase 4 of the Marvel Cinematic Universe.

With talks of potential sequels in a third Black Panther film and through the “Ironheart” series, there seems to be more stories to tell from the country of Wakanda and its diverse characters.

Transport yourself to the captivating kingdoms of Wakanda and Talokan by watching Black Panther: Wakanda Forever screening in cinemas nationwide.