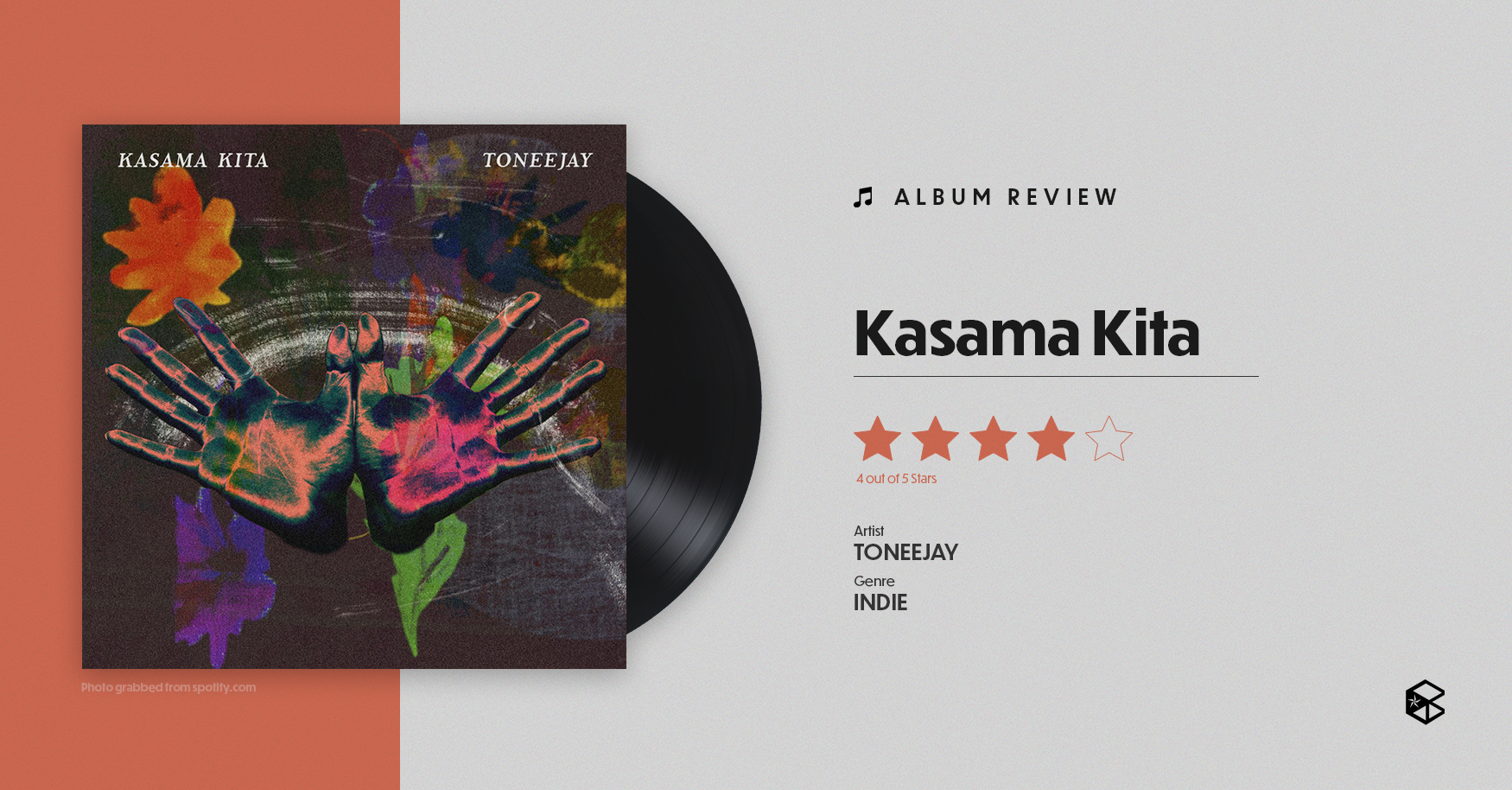 Relive memories of intimacy and wonder with TONEEJAY’s “Kasama Kita”

Flip through a music album full of warm and romantic memories in TONEEJAY’s sophomore album.

Filipino singer-songwriter TONEEJAY returns with a more gentle sound in his follow-up album Kasama Kita, released on Nov. 23 under Marilag Records. This 12-track collection is a bottle of sunshine and comfort he hands out to his listeners through “Alaala,” “Kanta ni Sam,” and “Talinghaga.”

In 2021, TONEEJAY released his debut album as a solo artist titled Beginning/End, which contains sounds inspired by artists such as AURORA and Kendrick Lamar, and video games like the “Last of Us” and “The Witcher 3.” In Kasama Kita, the melodies shift from the past album’s conceptual beats and mostly English-sung tracks to familiar guitar strumming and TONEEJAY’s dream-like vocals and Filipino lyrics that have allured his listeners since his days as Munimuni’s former vocalist.

Kasama Kita begins with a consistent string of beats in the song “Tulad Mo,” reminiscent of Beginning/End with a hint of acoustics. It’s a song that feels like wanting to find peace within the chaos and perhaps find peace within someone. The song’s speaker repeats, “Nais kong maging tulad mo,” which breaks into an instrumental buildup full of life similar to the song’s lyrics that depict the speaker wanting to be various lively natural elements such as ocean waves, fire, and lightning.

In the single “Kanta ni Sam,” TONEEJAY shows his love for his girlfriend (currently fiancee “Sam”) through this mellow and passionate track. The sweet lines of “Kay sarap awitin ng pag-ibig. Lalo na’t alam ko na mahal mo rin ako” certainly would make any listener also fall in love with this song. The charming lyrics would be accompanied by gentle guitar melodies that accentuate TONEEJAY’s vocals.

Furthermore, the single “Bawat Piyesa (Secret Verse Version),” is a collaboration between TONEEJAY and fellow Filipino singer-songwriter syd hartha. With its original version released under Munimuni, this track is a more toned-down iteration of the song, containing its titular secret verse sung by syd hartha. TONEEJAY and syd hartha’s vocals blend with a lulling richness that has elevated this classic indie OPM tune.

Reflecting on childhood wonder and freedom

Another prominent track in this album is “Alaala,” which was TONEEJAY unveiled in his TikTok post as a song about one’s childhood. It outlines how time flies, a somewhat melancholic song around the idea of childhood as a time when people didn’t have many responsibilities. TONEEJAY asks, “Pwede bang tumigil ang oras?” in this song, even for just a moment to remember those carefree days.

Nearing the end, one of the notable latter tracks in the album is its namesake song, “Kasama Kita.” In a tweet promoting the track upon the album’s release, TONEEJAY says it’s “A song about desiring the freedom to be your most authentic self and to love the people you love.” TONEEJAY sings with such liberty to the song’s tender lines: "Oh maging malaya kasama ka!”

Followed by the final track, “Doxology,” TONEEJAY wraps up his sophomore album with its kind and echoing lyrics that encompass what it means to have a sense of togetherness with someone dear to you.

Kasama Kita is a collection of benevolent tracks filled with stories of wonder and romance in the lyrics. It combines familiar tunes that TONEEJAY puts a twist to alongside new songs that also capture the hearts of his listeners. There’s nothing else to say about this album, as it simply breathes color into each song.

With growth from being part of a band to releasing his first solo album, TONEEJAY has shown a sense of maturity in his music, freely creating to his desires, and these have shown charming results with his shifting musical style.

Not sticking to the unique sound TONEEJAY established in his debut album, he combines his iconic mellow vocals with upbeat rhythms that turn this album into a fun-filled afternoon walk. The album wraps together solemnity and lightheartedness through its songs like a summer breeze reminiscent of childhood wonder and romance.

Listeners and fans of TONEEJAY can hopefully look forward to more of his expressive and visionary music soon.

For now, bask in the sentimental tunes of TONEEJAY by streaming Kasama Kita, available on various music streaming platforms.