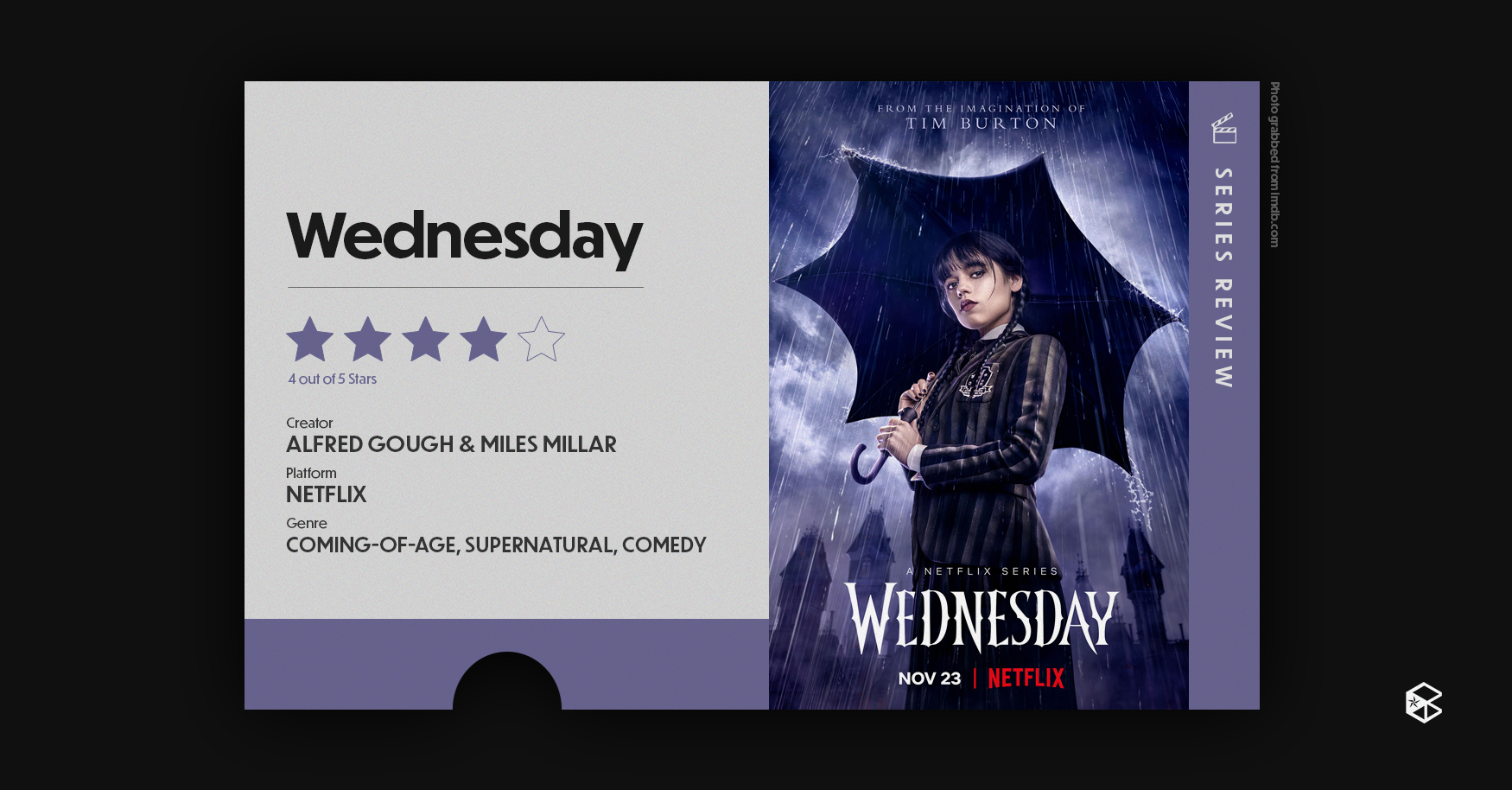 Tread the supernatural and mysterious journey of Wednesday Addams as she sleuths a series of murders in Nevermore Academy and takes on high school. Beware of minor spoilers, as they’ve come to haunt the living!

Created by Alfred Gough and Miles Millar, this new iteration of Wednesday Addams is a modern-day take on the character and the titular Addams Family. As Netflix released “Wednesday” on Nov. 23, audiences globally have received the show with enthusiasm and love for this murder mystery and the coming-of-age tale of Wednesday Addams.

Viewers walk into the cold and gothic life of Wednesday Addams (Jenna Ortega) as she’s recently expelled after retaliating against the water polo team for bullying her brother, Pugsley Addams (Isaac Ordonez), and dumping live piranhas into the pool during their practice. Her parents, Gomez (Luis Guzmán) and Morticia Addams (Catherine Zeta-Jones), then decide to transfer and enroll Wednesday at Nevermore Academy, a school for outcasts they once attended in Jericho, Vermont.

However, Wednesday’s world shifts upon transferring as she discovers her psychic abilities and is subsequently caught up in a web of the town’s local murder mystery. As Wednesday’s emotionless and defiant nature makes it difficult for her to connect with her new schoolmates and rebel against Nevermore’s principal, Larissa Weems (Gwendoline Christie), she slowly discovers that her black-and-white world has several shades of gray.

Thrilling characters from the crypt

One thing to note in “Wednesday” is how its formidable cast gives life to its characters. Jenna Ortega shows her acting prowess and dedication to her role as she’s spot-on in portraying the show’s titular character. Luis Guzmán and Catherine Zeta-Jones have the devoted chemistry as the ever-loving Gomez and Morticia.

Moreover, with Wednesday meeting her fellow outcast schoolmates, viewers get to know the bubbly werewolf Enid Sinclair (Emma Myers), who is roommates with Wednesday. The two hit it off with an opposites-attract friendship dynamic. Wednesday also reconnects with childhood friend Xavier Thorpe (Percy White), a student who can bring his art to life. Though not every Nevermore student is friendly as siren Bianca Barlay (Joy Sunday) clashes against Wednesday in school activities.

For guest stars, Fred Armisen brings out a humorous and electrifying performance as Uncle Fester. Similarly, Christina Ricci, known to play Wednesday Addams in The Addams Family (1991) and The Addams Family (1993), stars as Ms. Thornhill, a botany teacher in Nevermore Academy who is just full of surprises throughout the show.

Wednesday’s child is full of woe

As a modern take on the Addams family characters, “Wednesday” offers an entertaining story via a supernatural and deadpan comedic show. The classic goth girl character people fell in love with in past iterations of Wednesday Addams is further developed here, exploring the spectrum of her seemingly emotionless personality. She goes through high school like most 16-year-olds, struggling through familial tensions and tackling social and romantic relationships that cross her way.

On top of that, Wednesday’s manifestation of her psychic abilities unravels a lot about Nevermore Academy and the town of Jericho’s past, which ties to her parents as the show’s main plot. This version of Wednesday has a lot more on her plate than simply satisfying her sadistic tendencies and finishing her novel. That is one of the commendable things about this series as it carefully attempts to put a well-thought-out present-day spin on Charles Addams’ beloved characters without forsaking its story.

Narrative-wise, “Wednesday” is full of color in contrast to its grim characters. Each episode keeps you hooked on anticipation. Everyone can be a suspect in the terrorizing monster, and it was pretty fun to experience solving this murder mystery through Wednesday’s eyes. The subplots covering Wednesday’s social and romantic relationships don’t overshadow its main plot and complement it, giving a more entertaining experience.

Similarly, the series' production design immerses audiences in the otherworldly school of Nevermore Academy. Its sets can be compared to shows and films like “Stranger Things” and the Harry Potter films in attention to detail, such as Wednesday and Enid’s shared room halved into a colorful area for Enid and a dark space for Wednesday, mirroring the characters’ personalities.

For the show’s music, Danny Elfman mainly composed for the series. He frequently collaborates with the show’s executive producer and notable filmmaker, Tim Burton. Elfman also had some help in composition with Chris Bacon in turning music into a central character for the show. They also curated songs to include throughout the series, such as “Physical” by Dua Lipa and “Paint it Black” by The Rolling Stones.

Similarly, audiences get a glimpse of Ortega’s musical talents and commitment to playing her role as she learned to play the cello for crucial scenes in the series, featuring classical pieces such as “Concerto No. 4 in F minor, Op. 8, RV 297, Winter” by Antonio Vivaldi. Ortega also choreographed her moves for her now iconic Rave’N Dance scene as she grooved to “Goo Goo Muck” by The Cramps. She was inspired by goths dancing in clubs in the 80s and Lisa Loring’s iteration of Wednesday Addams’ side shuffle during the 1960s.

Though “Wednesday” may seem gruesomely thrilling, it still comes with some dull moments that can be sharpened in a potential next season. This includes some of the dialogue overstating the presence of social media apps like Instagram, TikTok, and Snapchat. The visuals of “Wednesday” already give enough context to the show’s setting. The show's writers didn't have to include apparent mentions of social media in dialogues.

Furthermore, the love triangle between Wednesday, Xavier, and Tyler (Hunter Doohan) seems slightly forced and even defeats the character of Wednesday herself. This is due to Wednesday’s main personality of self-preservation. However, this is forgivable, knowing that this modern take of Wednesday Addams emphasizes her adolescence and explores the entire spectrum of the character going through high school.

“Wednesday” is undoubtedly a stunning show to get into. It offers fans of the classic adaptations and newcomers to the Addams Family characters a grisly-fun mystery to unearth. Alongside its diverse and entertaining characters, “Wednesday” will surely break the ice in looking for a new show to watch today.

As “Wednesday” surpasses “Stranger Things” in its first-week debut on Netflix, racking up 341.2 million hours of views, a second season may be greenlit, especially knowing how the show’s first season has wrapped up with some loose ends.

While waiting, have a bloody good time watching “Wednesday,” streaming only on Netflix.